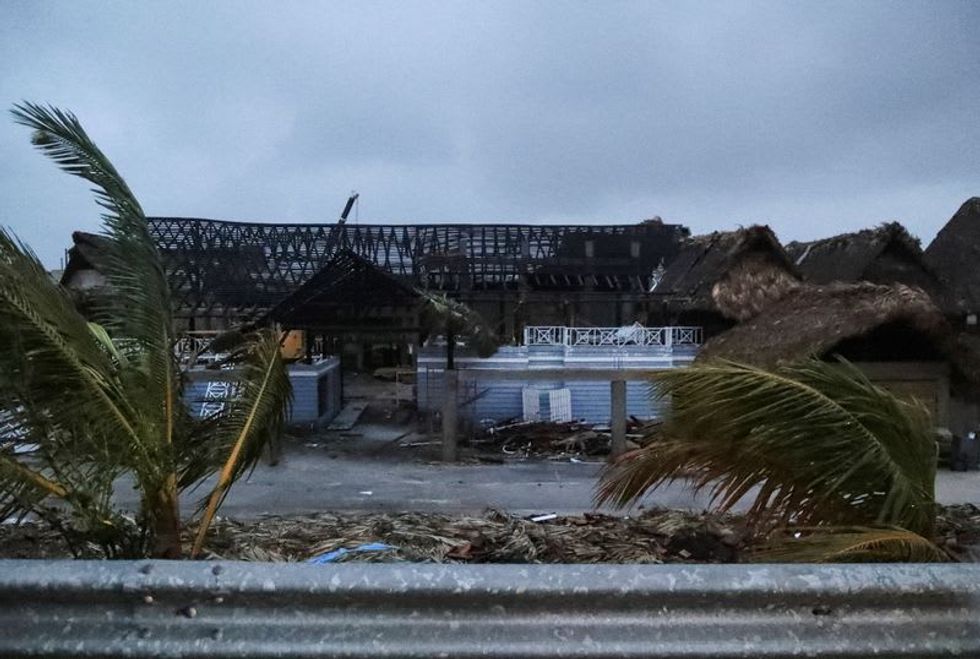 SAN JUAN, Puerto Rico/Santo Domingo (Reuters) -Hurricane Fiona battered the Dominican Republic on Monday with torrential rain and winds as strong as 85 miles (136.79 km) per hour, one day after triggering a total power outage in neighboring Puerto Rico where at least one person has died.

The Category 1 hurricane will likely become a Category 3 as it moves north of Hispanola, the Caribbean island that the Dominican Republic shares with Haiti, the U.S. National Hurricane Center said. Turks and Caicos Islands is now under a hurricane warning and the Bahamas could experience tropical storm conditions by Tuesday morning.

After strafing Puerto Rico, Fiona made landfall in the Dominican Republic near Boca Yuma at 3:30 a.m. local time, the NHC said. The center of the storm had reached the northern coast of Hispanola before noon.

It is the first hurricane to score a direct hit on the country since Jeanne left severe damage in the east of the country in September 2018.

Fiona made landfall in Puerto Rico on Sunday afternoon, dumping up to 30 inches (76.2 cm) of rain in some areas and producing catastrophic flooding. The storm comes five years after the U.S. Caribbean territory was ravaged by Hurricane Maria, which triggered the worst U.S. power blackout.

Jeannette Rivera, 54, a public relations worker in Orlando, Florida, said she had not spoken with her family since a spotty phone call early Sunday. She fears for her parent's safety and health of her 84-year-old father, who had just contracted COVID-19 and was running a fever.

"My worry is that if they need help, there's no way to communicate," Rivera said.

Nearly 90% of Puerto Rico remained without power Monday afternoon, according to Poweroutage.us. Officials said it would take days to reconnect the whole island of 3.3 million people.

Many roads were left impassable due to downed trees and mudslides. Images on social media depicted submerged cars, people wading in waist-deep water and rescue boats floating down swamped streets. Just 30% of the drinking water customers have service.

Crews rescued some 400 people from flooding in Salinas, a town in the south where rain has turned to a drizzle. The south and southeast regions were the hardest hit.

The National Weather Service urged the public to be aware of weather conditions and take preventive measures in time as four to six additional inches of rain are still expected.

"This is not over," said Ernesto Morales, acting director of the National Weather Service.

Puerto Rico's power grid remains fragile despite emergency repairs after Maria caused the largest blackout in U.S. history in September 2017, according to Center for a New Economy, a Puerto Rican think tank. In that Category 5 storm, which killed more than 3,000 people, 1.5 million customers lost electricity with 80% of power lines knocked out. Thousands of Puerto Ricans still live under makeshift tarpaulin roofs.

About 800 people were evacuated from high-risk areas and around rivers and ravines in rural communities in the east, according to the country's Office of Civil Defense.

While the National Weather Service lifted its hurricane warning for Puerto Rico on Monday, officials warned that rainbands could follow the storm system for hundreds of miles. Authorities urged residents to seek higher ground.

"Unfortunately, the situation in Puerto Rico is not good and not looking to improve until later today when these bands finally pull away," Acting NHC Director Jamie Rhome said.

A 70-year-old man in the northern town of Arecibo is the first known casualty in Puerto Rico. He was trying to start his electric generator when the machine exploded, killing him instantly, police said.

Hundreds of responders were assisting in recovery efforts after U.S. President Joe Biden declared an emergency for the island, Biden said in a tweet. The announcement authorized the Federal Emergency Management Agency to coordinate disaster relief and provide emergency protective measures.

Puerto Rico Governor Pedro Pierluisi said the government's response has been much more efficient than during Hurricane Maria.

The government has not estimated the damages, since it is still in the response period, though the governor said they were in the millions.

For most of the five years since Maria struck Puerto Rico in 2017, the debt-laden government and the Puerto Rico Electric Power Authority, or PREPA, had been mired in bankruptcy, and island finances were managed by a federally appointed oversight board.