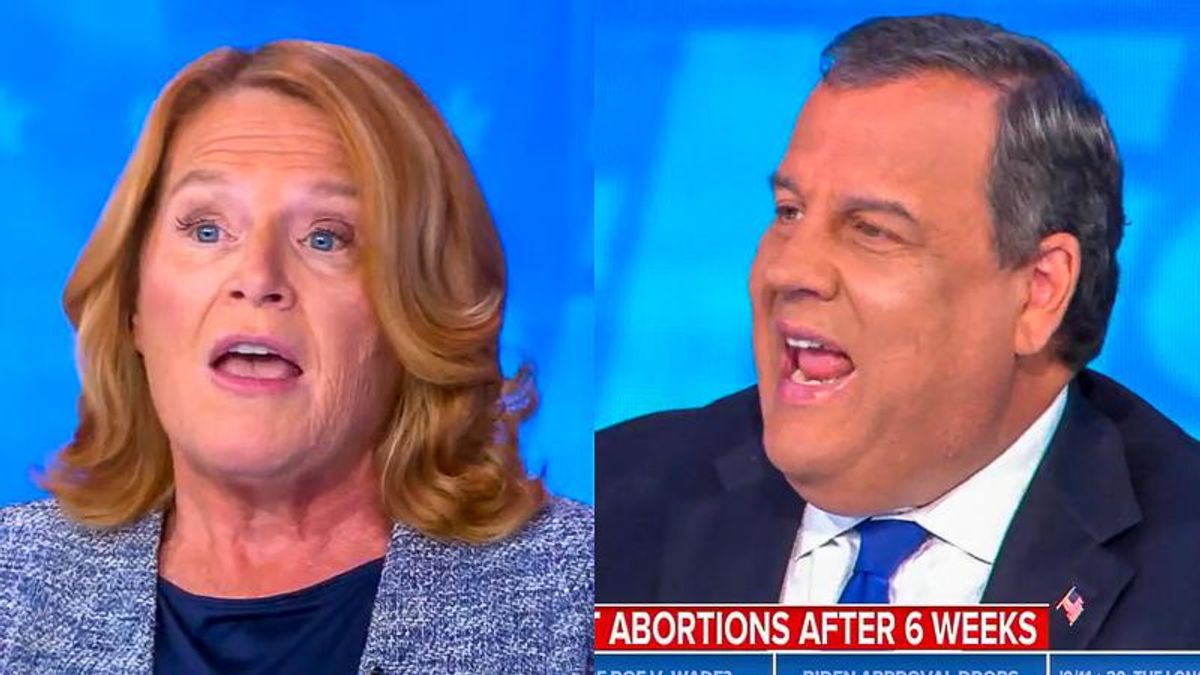 Former Sen. Heidi Heitkamp (D-ND) on Sunday pushed back against former Gov. Chris Christie (R-NJ) after he suggested that women should lose reproductive rights due to advances in science.

During a discussion on ABC's This Week, Christie told a panel of three women that they did not deserve abortion rights even though he would not address the substance of a Texas law that effectively bans nearly all abortions.

"Here's what I think we need to do," he said. "We need to have an honest conversation about abortion in this country. There's obviously a lot of discontent in many, many states across the country with Roe v. Wade. And as long as we don't have an honest conversation about whether this really is a federal constitutional right or not, we're not going to be able to resolve this issue."

ABC host George Stephanopoulos noted that the Texas law allows private individuals to collect bounties on women who have allegedly had abortions. But Christie refused to address the Texas law directly.

"Because people aren't following the law and doing things in a cogent way, you get laws like this," Christie insisted, "which are trying to jerry-rig around Roe v. Wade, which in my view, not only as someone that's pro-life but also as someone who's a lawyer."

"But can you support a law like that?" Stephanopoulos pressed.

"What I support is an honest conversation about abortion in this country," Christie repeated. "Again, remember how Roe v. Wade was decided. Out of nowhere, the United States Supreme Court decides that first trimester is not to be protected and they're moving forward."

"Science has changed so much since then," he added. "One of the reasons you're seeing a decline in abortion is an increase in science and how much more people know about viability. And when they know that, they're much more appalled by the act of abortion than they were back in 1973."

Heitkamp said that she "totally" disagreed with Christie's assessment.

"I don't think that this is about the science or about what's happening," Heitkamp said. "This is about fundamentally women being able to make a choice. And what I'm concerned about is how it's going to further divide the country. Because reversal of Roe v. Wade does not eliminate abortion in this country. It eliminates a national right for abortion. So now all of the sudden, blue states like California, New Jersey, and New York all of the sudden say, 'We believe in a woman's right to choose. We believe that women have that choice with their doctor to make this decision.'"

"You're going to see a further polarization of this country," she concluded, "of human rights and women's rights. And so, this is extraordinarily dangerous."

Christie interrupted: "Listen, this is what we call the system that our founders set up. Which is, if the right is not enumerated in the Constitution, it reverts to the states to decide and each one of these states in my view should be able to make this decision on their own."