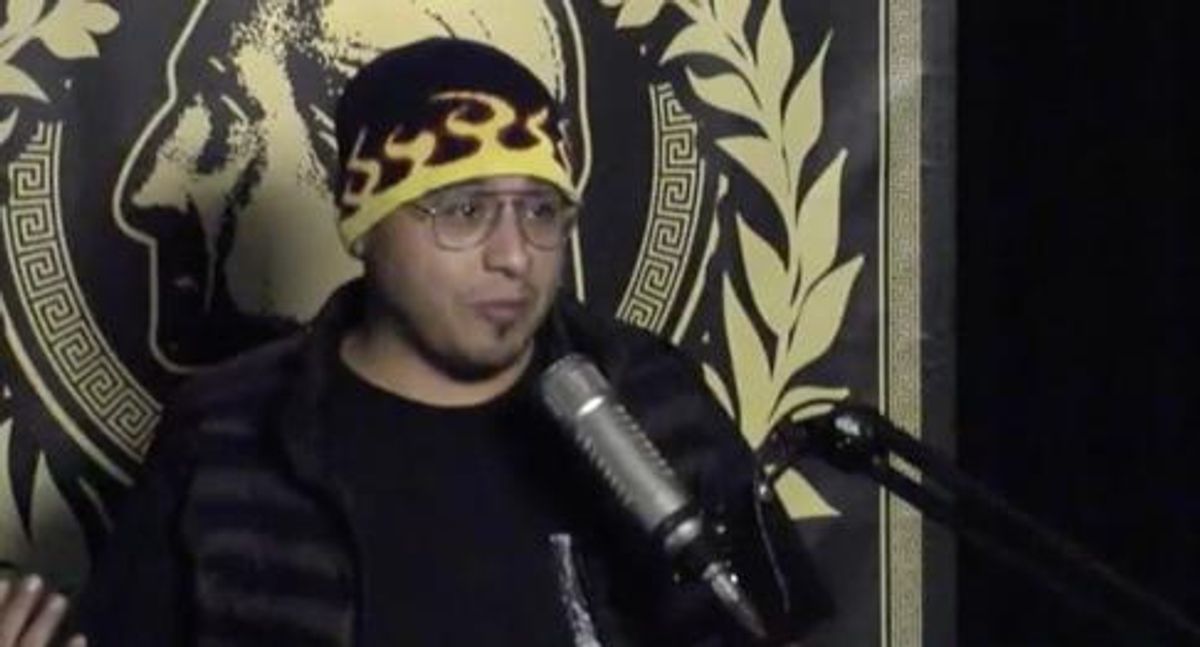 "PatriotsStormCongressRawFootageIncludesExecutionofAshliBabbitt. The approximately 44-minute video is embedded with the tag "THERESISTANCE.VIDEO" and the narrator identifies himself as "Sam with Infowars.com." The video captures "Sam" going from the Capitol grounds into the Capitol Building along with crowds of protesters on January 6, 2021, at one point turning the camera on himself and exclaiming, "It feels good to be in the Capitol baby!"

Here are some of the other comments attributed to Montoya in the FBI arrest complaint:

"During the video, Montoya makes the following statements:
9:55 – "We're gonna crawl, we're gonna climb. We're gonna do whatever it takes, we're gonna do whatever it takes to MAGA. Here we go, y'all. Here we go, y'all. Look at this, look at this. I don't even know what's going on right now. I don't wanna get shot, I'll be honest, but I don't wanna lose my country. And that's more important to me than—than getting shot."
11:04 – "We have had enough! We're not gonna take your fucking vaccines! We're not gonna take all your bullshit! The people are rising up! Folks, I am now on the steps of the Capitol. Here we go! Here we go! Having a good time!"
12:55 – "We are in the Capitol, baby! Yeah!"
15:40 – "We're all being a little bit too rowdy for sure."
16:07 – "Here we are in the US Capitol in Washington DC in the Capitol building, it has officially been stormed by Trump supporters. Again, the US Capitol building in Washington DC has officially been stormed by Trump supporters. And here we are, taking our—the people's house back!"
17:38 – "I'm sure these officers are scared, but we're here, we're here to just show that we've had enough. We've had enough."
34:05 – "We don't hurt innocent people; we don't tear down statues! We don't tear down statues! We take our house back! We take the people's house back!"


The report also states: "At times during the video, Montoya describes himself to others inside the Capitol Building as a "reporter" or "journalist" as he attempts to get through crowds. The director of the Congressional press galleries within the Senate Press office did a name check on Samuel Christopher Montoya and confirmed that no one by that name has Congressional press credentials as an individual or via any other organizations.

The FBI stated it had received a tip January 11 to its National Threat Operations Center "from W-1, a family member of Samuel Christopher Montoya." W-1 reported that W-1 had proof that Montoya was physically inside the U.S. Capitol near the shooting of a woman on January 6, 2021. FBI agents interviewed W-1 on January 17, 2021, to follow up on the tip received. W-1 stated that Montoya worked for Infowars and that Montoya showed a video of himself walking through the Capitol and captured footage of the death of Ashli Babbitt. W-1 reported that Montoya showed the video to family members who all recognized Montoya as being the one in the video and having taken the video.

And there was this: "Your affiant has also reviewed several interviews with Montoya on the Infowars show "War Room with Owen Shroyer" regarding the events at the U.S. Capitol. On January 8, 2021, Shroyer interviewed Montoya in a video titled "EYE WITNESS ACCOUNT OF ASHLI BABBITT'S EXECUTION"2 Montoya - who is credited as "Sam," and a "Video Editor" at "Infowarsstore.com" – describes to Shroyer hearing the gunshot and his recollections of the scene of the shooting. His "exclusive" footage that is played features his same voice narrating as in the 44-minute video, and appears to depict activity by the Speaker's Lobby sometime after the conclusion of his 44-minute video.