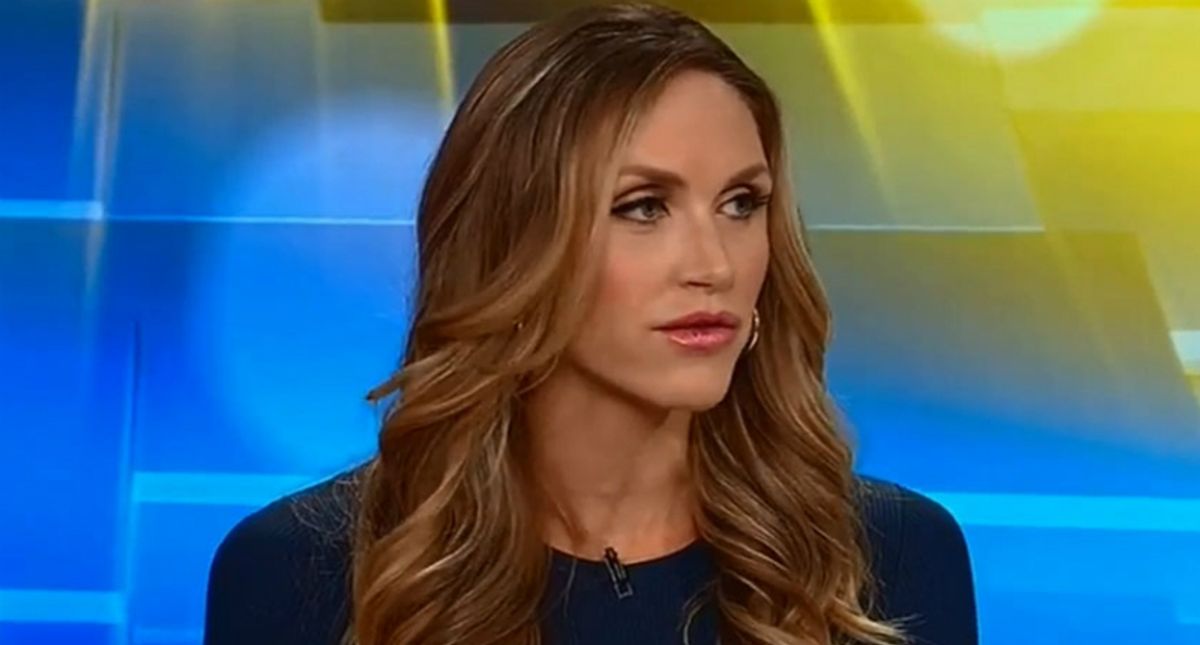 Lara Trump, the daughter-in-law of America's biggest loser, has just been proclaimed the winner of the impeachment trial that resulted in a 57-43 vote to convict husband Eric's dad for inciting insurrection against America.

Senator Lindsey Graham of South Carolina has somehow decided that Donald Trump's escape means Lara Trump is now certain to become senator of North Carolina. She's expected to seek the seat being vacated next year by Senator Richard Burr, who infuriated the Republican Party Saturday by voting to convict Trump. Burr had announced in 2016 he wouldn't seek another term in 2022.

If Graham has a reason to elevate Lara Trump other than her last name, he's keeping it to himself.

"The biggest winner I think of this whole impeachment trial is Lara Trump," Graham told Fox News' Chris Wallace. "If she runs, I will certainly be behind her because I think she represents the future of the Republican Party."

This will likely come as news to Senator Tim Scott, Graham's fellow Republican from South Carolina, who has already endorsed the candidacy of former Rep. Mark Walker for the seat. The same goes for Senator James Lankford of Oklahoma and former Governor Mike Huckabee, who hosted Walker on his show.

"I will work hard to elect (Walker)! Good ppl of North Carolina deserve better than Burr who must want to be asked to be on Morning Joke on BSNBC" tweeted Huckabee, venting about Burr's vote.

As the New York Times reports today, the race to replace Burr is wide open, and Walker might have competition besides Trump.

"Pat McCrory, a Republican former governor, is also a possible candidate. Mark Meadows, the former North Carolina representative and former Trump chief of staff, is also said to be in the mix. "We are going to take a very long look at all the candidates versus, you know, some kind of coronation," said Mark Brody, a member of the Republican National Committee from Union County, outside Charlotte.

Less than two months ago, CNN published a story with a similar theme headlined "Lara Trump's potential Senate candidacy does little to scare away Republican challengers in North Carolina."

But for now, Walker, who announced December 1, is the only announced major candidate for Burr's seat. He lost no time condemning Burr's vote to convict Trump for a fundraising email and tweeted about it:

It's not clear what Lara Trump's message will be, but it's certain not to fall to the political right of Walker, a former Baptist pastor who compiled a far-right voting record in three terms in Congress. Among his greatest hits were statements that he "didn't have any qualms" with starting war with Mexico if need be over immigration, calling women colleagues "eye candy" and objecting to a ramp for ducks at the U.S. Capitol reflecting pool.

For her part, Trump, a former personal trainer and TV producer, hasn't weighed in much on actual issues. She did make headlines in a 2019 interview with Fox Business' Stuart Varney, who asked her about German Chancellor Angela Merkel's decision to allow migrants into the country.

"It was the downfall of Germany, it was one of the worst things that ever happened to Germany," Trump responded. "This president knows that. He's trying to prevent that from happening here."

But Trump apparently would be emphasizing her name more than her policy positions if she decides to move with husband Eric from their husband in the New York City suburbs. The fact that she is a North Carolina native but not a resident is expected to come a time or two.

Here's how the Times analyzed the race.

"If she runs, the Trump family might be a liability in a battleground that the former president won by a mere 1.3 percentage points in 2020 — or it might confer no advantage at all, depending on the political environment in 2022.

"There is a myth that Trump voters will come out for Trump candidates or family members," said John Anzalone, a Democratic pollster who has worked on campaigns in the South. "Cult members only come out in full force for the cult leader."

But Ms. Trump's boosters, led by Mr. Graham, are hoping she can use the backlash in the party's base to catapult her to the front of the field.

Representative Patrick T. McHenry, a Republican who serves in a leadership position in the House minority, downplayed the importance of Mr. Burr's vote.

But he said Ms. Trump would "be the odds-on favorite" if she runs, adding, "No one comes close."

Twitter is lighting up at the prospect of Lara Trump on the stage: