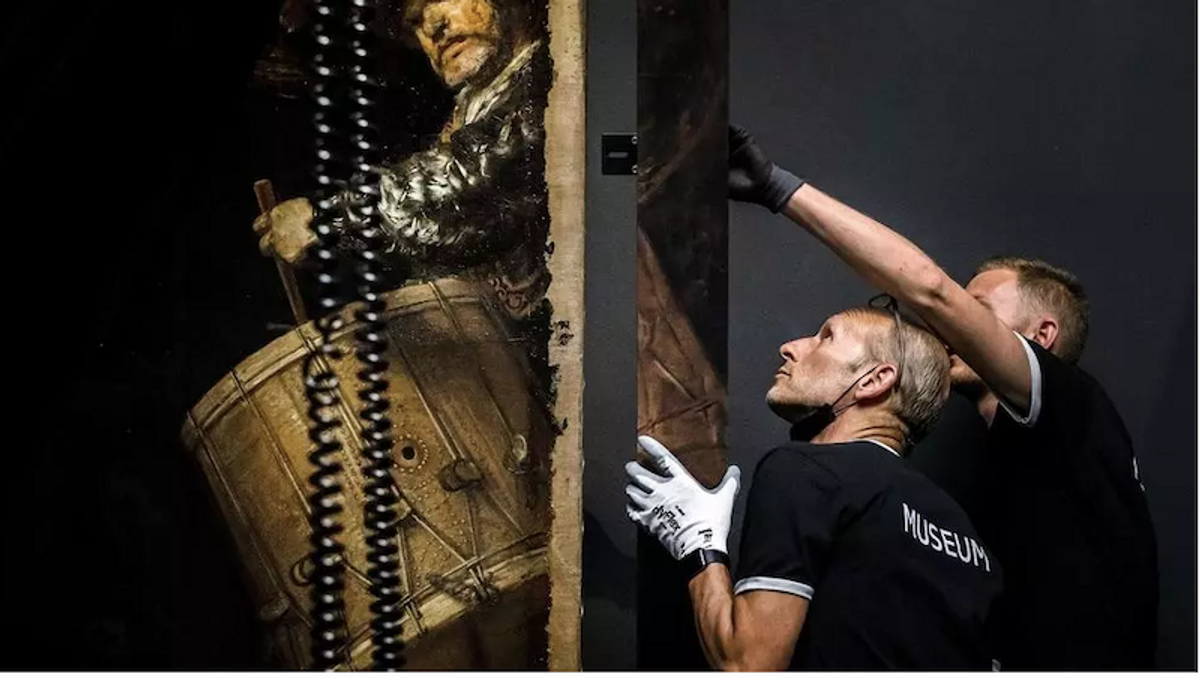 For the first time in more than 300 years, art lovers can see Rembrandt's "The Night Watch" after a stunning reconstruction Remko de Waal ANP/AFP

Based on a small 17th century copy of "The Night Watch", scientists used artificial intelligence to recreate the missing sections, which have been printed and mounted around the famed artwork.

"Because you know the painting since you're a child, and you feel that suddenly you've taken a step back in time for 300 years."

The reconstruction has revealed the true dynamism of Rembrandt's original composition, with the two key people at the centre of the painting, Captain Frans Banninck Cocq and Lieutenant Willem van Ruytenburch, now offset to the side, said Dibbits.

The lost figures of two men and a small boy have meanwhile been restored to the left hand side where a 60-centimetre (24-inch) strip was cut off the painting, which even in its smaller form measures a huge 3.79 meters by 4.36 meters (12 feet, five inches by 14 feet, four inches).

The Rijksmuseum, which recently reopened after the relaxation of coronavirus measures, will keep the panels in place for three months, as part of a huge restoration of the painting launched in 2019.

Rembrandt painted "The Night Watch" in 1642 after a commission by Cocq, the mayor and leader of the civic guard of Amsterdam, to depict the officers and other members of the militia.

After hanging in the civic guards' club house for 73 years the painting was moved to Amsterdam town hall where it was destined for a space between two doors but "it didn't fit", said Dibbits.

"The people who moved it decided to cut it and really took scissors and just cut on all four sides."

The strips that were cut off have never been found.

It was the first of many trials suffered by "The Night Watch", which was stabbed by a man with a knife in 1911, hidden in a bunker when Nazi Germany invaded the Netherlands, slashed by another knifeman in 1975 and sprayed with acid in 1990.

The reconstruction of the missing pieces was possible because of a much smaller copy made in the 17th century by the artist Gerrit Lundens -- but that copy was in a somewhat different style and color, and from a slightly different perspective.

The solution was "sending artificial intelligence to art school", said Robert Erdmann, Senior Scientist at the Rijksmuseum, who led the project.

"If we were to simply blow this up and put it next to "The Night Watch" it wouldn't match in any way," Erdmann told AFP.

"So to help it match, I've trained three separate neural networks to help with this process, so that's a kind of artificial intelligence in which we can teach the computer by giving it examples."

The computer compared Rembrandt's original to the copy, and once it had mastered his style, Erdmann set it to work on recreating the lost pieces.

Its mimicry was so successful it even learned to copy the minute cracks in the surface of the existing Night Watch, he said.

Finally the image was printed onto canvas, which was varnished and then placed on four metal frames that were placed around the painting.

"It was really a delight" to see the restored painting, said Erdmann. "It really changes the entire composition."

Art experts can now see how the black-clad captain and his white-uniformed lieutenant were in fact set off to the side to show how the militia was in motion, while the extra figures on the left give depth and perspective.

"The key is that Rembrandt keeps on surprising us, he keeps on doing things that you wouldn't expect him to do," said Dibbits.