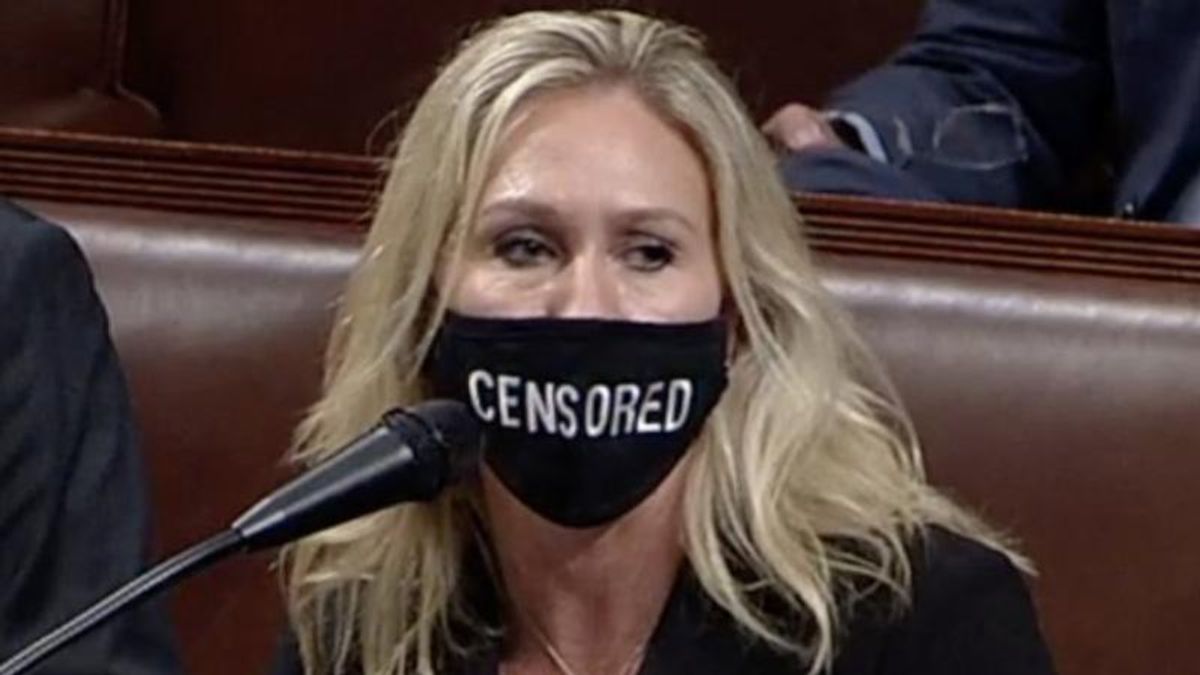 The first-term congresswoman, who has voiced support for QAnon, has already become highly controversial during her first two weeks in Congress.

Here's some of what people were saying about her mask and speech:

Who thinks the whole Marjorie Taylor Greene thing is going to end well? This is a legitimate crazy person. A danger… https://t.co/x0OJyuNR0w
— John Iadarola (@John Iadarola)1610566285.0

Wearing a mask that says "CENSORED" while you're giving a televized speech on the floor of Congress as a sitting U.… https://t.co/Tot3YAFOTA
— Taniel (@Taniel)1610566188.0

It's nearly the universal opinion on the left that the rare violence at BLM protests was unfortunate and perpetrato… https://t.co/AiTuvmguOJ
— Amanda Marcotte (@Amanda Marcotte)1610566265.0

Will someone please tell whoever installed Marjorie Taylor Greene's mask that we can all still hear her? Thanks.
— Richard Jeter (@Richard Jeter)1610566958.0

The death of irony: Rep. Marjorie Taylor Greene wears a mask that says "censored" as she speaks into a microphone i… https://t.co/0YZuAKneMs
— Karen Tumulty (@Karen Tumulty)1610566166.0

Georgia's QAnon Congresswoman @mtgreenee is on the floor now in a "censored" mask and spends her time complaining a… https://t.co/VsoXi0MH1O
— stephen fowler (@stephen fowler)1610566270.0

I don't think anyone paid attention to what Marjorie Taylor Greene actually said because of the irony of her "censo… https://t.co/h1L3frrbgy
— Jess Aloe (@Jess Aloe)1610566789.0