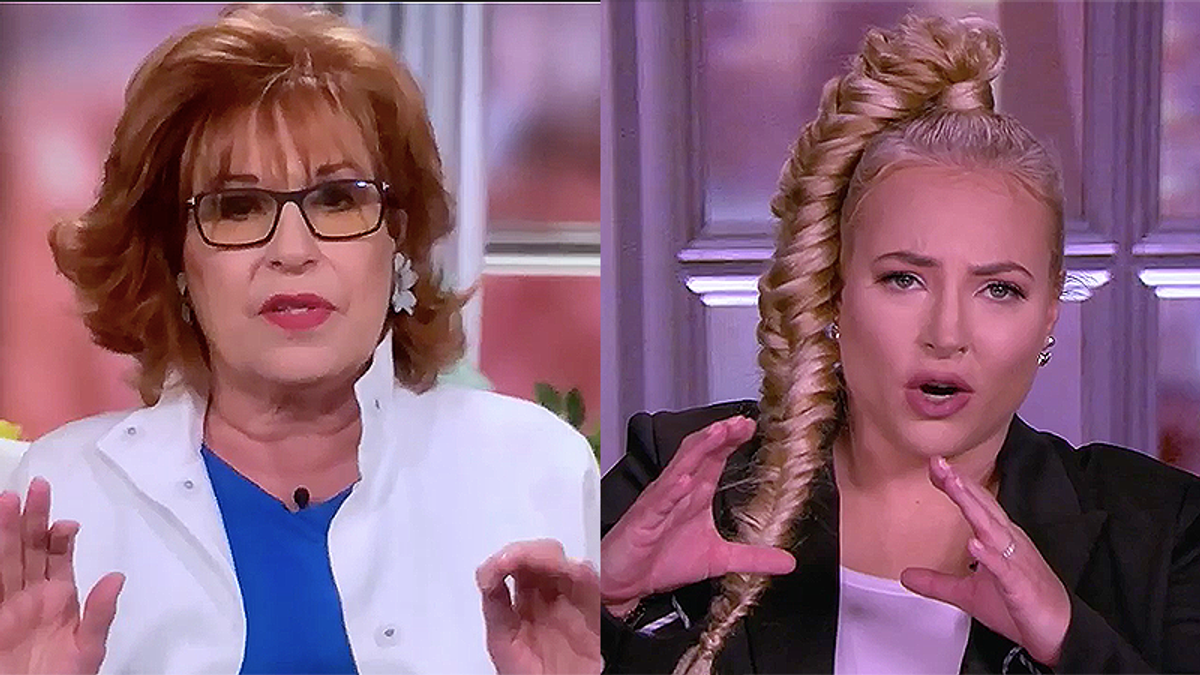 Another clash broke out on "The View" Thursday as Meghan McCain and Joy Behar fought over conservatives who continue to refuse to get the COVID-19 vaccine to "own the libs."

McCain argued that it isn't the way conservatives feel and that many people she knows are concerned about how the vaccine impacts their fertility. Studies showed that the vaccine didn't have any adverse impact on pregnant women, but McCain said that the same studies haven't examined the fertility of women who got the shot. Presumably, all women of childbearing age could be examined for fertility who got the vaccine.

Co-host Sunny Hostin called those who refuse to get the vaccine "selfish," noting that people are "supposed to be our brothers and sisters keeper."

"We're supposed to take care of each other," said Hostin. "The notion we have to incentivize people to get vaccinated so they not only protect themselves and their families but their fellow citizens — I guess I can't make sense of something like that when you have a country like India where there are 4,500 deaths every day from COVID and people there are begging for the vaccine. I don't understand why in this country where people say this is just the most glorious country in the world where we have all of these freedoms and we have, you know -- we just have so much that you have to actually give free metro cards to people, give money to people, enter people into a million-dollar lottery in order for them to take a life-saving vaccine, I just find it, you know, sort of sad and selfish and quite frankly kind of absurd."

Behar said that Dr. Anthony Fauci has to remain polite to anti-vaccine people as he continues his attempt to reduce vaccine hesitancy with information.

"It's not that complicated, people. It's not nuclear physics. All you have to do is get the damn vaccine. When you go inside, wear a mask, even if you have the vaccine," Behar said. "There might be variants around. Get the damn vaccine. Get the booster when that time is coming. What is the complicated problem here with people? I don't understand. Is this just to own the libs? Maybe they're not seeing enough on television the way people suffer when they get the disease. Even though the numbers are going down, people are still dying.

She recalled the Polio vaccine being huge when she was a child after watching so many children be put in iron lungs and lose their ability to walk.

"You're not owning the libs by not getting the shot," Behar explained. "Nobody is growing an extra arm or head. Everybody is fine. It's the people not taking it who are not fine. I'm sick of it."

McCain complained that the "messaging" to conservatives isn't helpful because mocking them for being "stupid" and trying to "own the libs" by dying are insulting and that people should be nicer. She also complained that there aren't figures or numbers on television to help quell "some of this." Most news stations have shown a substantial decline of COVID infections as a result of the vaccine and of COVID deaths. Specifics are available with a Google search.

"I think, again, the White House and the CDC has done a terrible job in saying what do you want to own the libs and that's that?" said McCain. "It's not productive. That's why people go into their corners. This is coming from a place of fear. I don't think it's a place of politics. People don't understand and don't know. I don't like to judge people who aren't accessible to the same resources and education I am. This is a serious, serious problem in this country. I agree with Sunny it's a luxury to have the vaccine. I was happy to get vaccinated. Maybe they should make the vaccine card in a size I can carry around in my wallet. It's this big right now. A lot of things they've done, they're really stupid. I'm also sick of that."

Behar came in noting that people of color absolutely have justifications for being fearful of the vaccine given the disgraceful history. McCain cut in, talking over her, which prompted Behar to talk over her.

"When you come on the show and say we're owning the libs, it's factually inaccurate about the demographics who are not getting vaccinated," McCain said.

"A lot of these people that we're talking about, Meghan, are watching Sean Hannity and Tucker Carlson who are telling them that--" Behar said before McCain shouted over her.

"We're going to come back," Whoopi Goldberg said as the women yelled in the background.