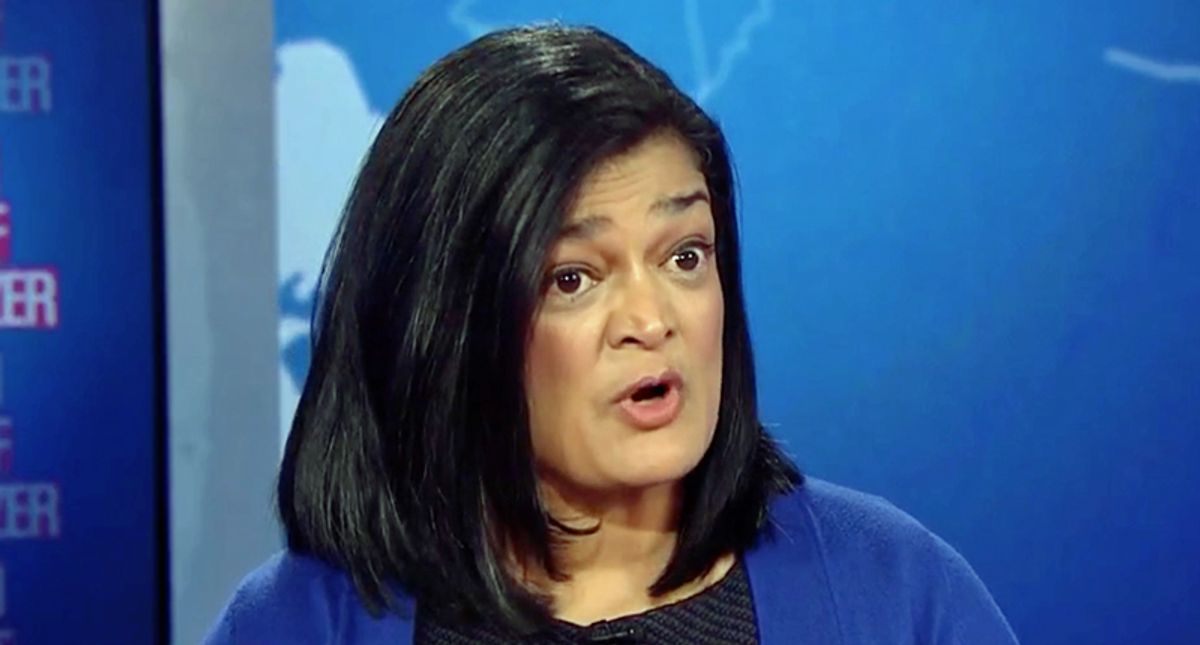 After the Congressional Progressive Caucus on Monday secured inclusion of $15 federal minimum wage legislation in the House version of the coronavirus relief package that lawmakers are ironing out in committees, Rep. Pramila Jayapal of Washington implored her Democratic colleagues to do all they can to ensure the long-overdue pay raise for millions of workers remains in the final bill and becomes law.

"Democrats have to fight. We have to fight with everything we've got for these progressive, bold ideas that are gonna bring relief to people," Jayapal, chair of the nearly 100-member CPC, said in an interview on MSNBC late Monday, referring to both the $15 minimum wage bill and the House measure's proposed eligibility framework for $1,400 direct payments.While Senate Democrats are currently discussing lowering the annual income cutoff for the relief checks, the House Democratic leadership unveiled legislation (pdf) Monday that would send full $1,400 payments to individuals earning up to $75,000 per year and married couples earning up to $150,000 per year, with the payments gradually phasing out thereafter—an eligibility structure similar to the one used for the previous two rounds of checks.

"We should not be cutting thresholds to $50,000 and 100,000," Jayapal said, alluding to the narrower eligibility proposal that top Senate Democrats are considering. "That makes no political sense... but it also makes no policy sense."

The Washington Democrat argued that weakening the coronavirus relief package in a bid for bipartisan support would be deeply misguided, declaring, "We shouldn't care whether Republicans are gonna vote for this or not."

"The vast majority of the American people support this package, Republicans and Democrats," said Jayapal. "So if we want to talk about unifying proposals, a big bold stimulus package that raises the wage and gets checks out to people, puts money in people's pockets, deals with all of the issues that small businesses and families are facing—that is the unifying proposal and Republicans, if they don't want to go along with it, that's up to them."

News that the 2021 Raise the Wage Act was included in the House relief package came hours after the Congressional Budget Office (CBO) on Monday released an analysis estimating that a $15-an-hour federal minimum wage by 2025 would lift nearly a million people in the U.S. out of poverty and raise the pay of 27 million workers.

The CBO also projected that the wage increase would add $54 billion to the federal budget deficit over ten years, a conclusion that progressives welcomed as further evidence that the pay raise would have a substantial impact on spending and revenue and thus complies with the Senate's Byrd rule.

That rule—which requires every provision of a reconciliation bill to have a direct budgetary impact—remains one of the few obstacles in the way of inclusion of $15 minimum wage legislation in the Senate relief package. Both the House and Senate must eventually pass identical legislation for the relief package to become law.

"From a Byrd rule perspective, the CBO has demonstrated that increasing the minimum wage would have a direct and substantial impact on the federal budget," Sen. Bernie Sanders (I-Vt.), chairman of the Senate Budget Committee, said in a statement Monday. "What that means is that we can clearly raise the minimum wage to $15 an hour under the rules of reconciliation."

On Sunday, as Common Dreams reported, Sanders said the Senate budget panel has a "room full of lawyers" working to make the case to the chamber's parliamentarian that the wage increase qualifies under reconciliation rules.

"I hope, and believe, that at the end of the day members of the Democratic caucus understand that we do need to pass a $15-an-hour minimum wage," said Sanders.

Crediting grassroots organizers across the U.S. for their tireless work to end starvation wages, Rep. Cori Bush (D-Mo.) late Monday applauded the House Democratic caucus for "embracing the base."

"Now the Senate must too," said Bush. "But this fight was never about $15. It was about a livable wage. We need to get this done and then get right back to work to fight for more for our communities."

Varshini Prakash, executive director of the Sunrise Movement, said in a statement late Monday that the "power of working people across the country has shifted the political terrain to make this victory possible, but our movement will not stop until a $15 minimum wage is firmly passed into law."

"Our movement will be watching closely to hold Democrats accountable to passing this provision in the final stimulus package, as well as stimulus checks for all," said Prakash. "If they don't, Democrats will have to answer to a coalition of labor unions, activists, and the young people who organized like hell to get them elected."