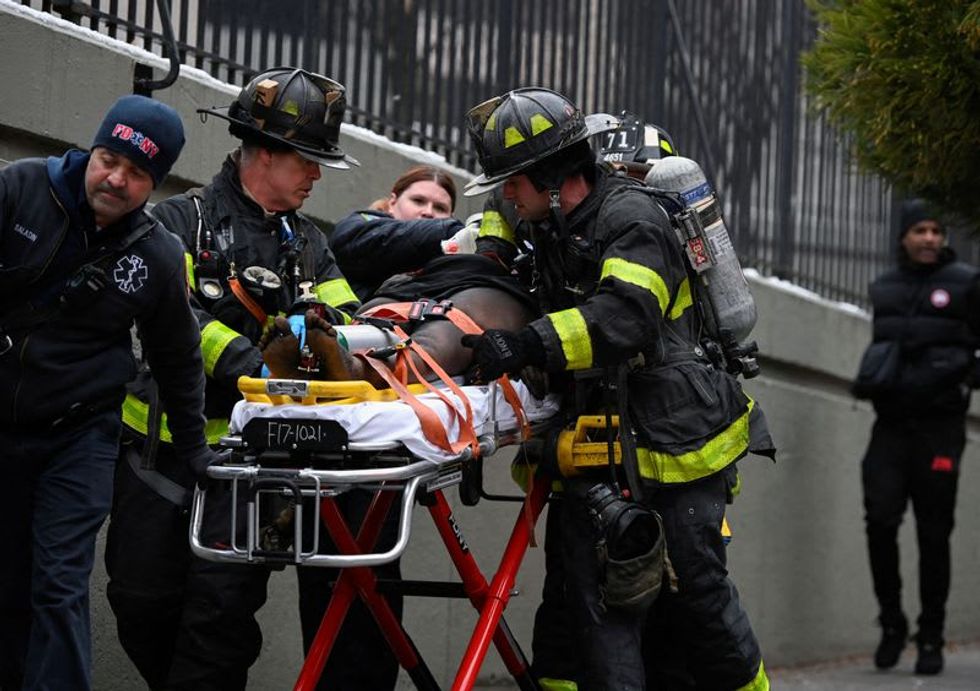 NEW YORK (Reuters) -Nineteen people were killed, including nine children, and dozens were injured when a fire, started by a malfunctioning space heater, spread smoke through a 19-floor building in The Bronx borough of New York City on Sunday, city officials said.

New York City Mayor Eric Adams, just over a week into the job, confirmed 19 people had died from the blaze that broke out around 11 a.m. in the imposing brown-brick building which provided affordable housing units.

Earlier on Sunday, officials said 32 people had been hospitalized with life-threatening injuries and some 60 people were injured in total.

"It's a tragedy beyond measure," Adams wrote on Twitter. "Join me in praying for those we lost, especially the 9 innocent young lives that were cut short."

In a press conference on Sunday afternoon, Adams said "it appears as though this stemmed from a space heater."

The fire itself started in an apartment that spanned the second and third floors of the building, and only made it to the hall, officials said.

But smoke still spread to every floor of the building, likely because the door to the apartment was left open, and victims suffered from significant smoke inhalation, the city's fire department commissioner Daniel Nigro told reporters at a news briefing.

"Members found victims on every floor in stairwells and were taking them out in cardiac and respiratory arrest," he said.

Nigro said fire marshals had determined through physical evidence and accounts from residents the fire started in a portable electric heater in the apartment’s bedroom.

The catastrophe was likely to stir questions on safety standards in low-income city housing. This was the second major deadly fire in a residential complex in the U.S. this week after twelve people, including eight children, were killed https://www.reuters.com/world/us/least-13-killed-philadelphia-house-fire-local-media-report-2022-01-05 early on Wednesday when flames swept through a public housing apartment building in Philadelphia.

Some 200 firefighters helped put out the blaze, and some ran out of oxygen in their tanks but pushed through anyway to rescue people from the building, Adams told CNN on Sunday.

A Reuters photographer at the scene on Sunday saw emergency responders performing CPR on at least eight people in front of the building. Firefighters with hose lines were working to push smoke out of the building, and one of them was seen breaking a window on an upper floor to release the fumes.

The building is owned by a joint venture, Bronx Park Phase III Preservation LLC, made up of three firms. "We are devastated by the unimaginable loss of life caused by this profound tragedy," a spokesperson for the joint venture said.

Bronx Park Phase III Preservation LLC did not immediately respond to requests for information on the building's fire safety record and inspection history, affordable housing units, and management. The building was built in 1972, officials said.

Affordable Housing Online, a website that shares information on public housing, reported the building has "a certain number of units" set aside for lower-income households.

"I am horrified by the devastating fire in the Bronx today. My heart is with the loved ones of all those we’ve tragically lost, all of those impacted and with our heroic @FDNY firefighters," New York Governor Kathy Hochul wrote on Twitter on Sunday.