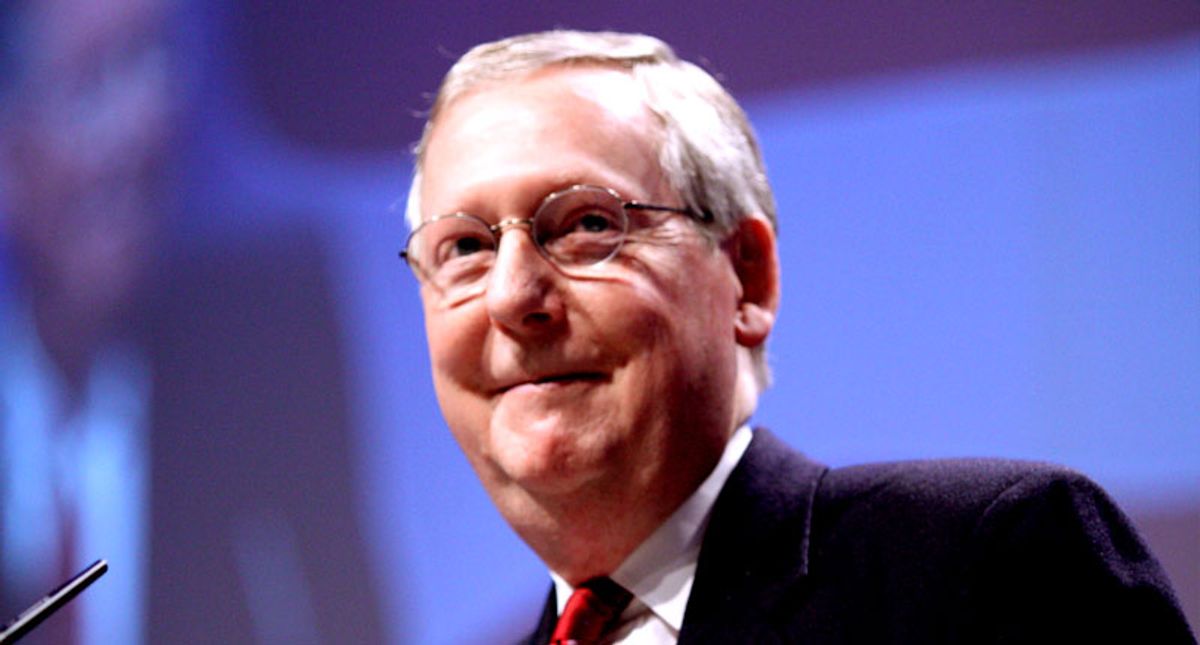 Republican greed is why Americans can't have nice things.

Every developed country in the world has some variation on a free or low-cost national healthcare system, and free or even subsidized higher education. In most developed countries homelessness is not a crisis, nobody goes bankrupt because somebody in their family got sick, and jobs pay well enough and have union pensions so people can retire after 30 or 40 years in the workforce and live comfortably for the rest of their lives.

But not in America. Republicans would never allow any of those things to happen.

It's not about racism, although it often appears that way. The reason Republicans work so hard to keep Black and Brown people down is because they subscribe to a weird economic theory that "requires" an underclass who do most of the hard work for very little money so rich Republicans, being part of the overclass, can reap the benefits and stuff the extra cash into their money bins.

If their use of racist language and Confederate iconography brings in a few more low-IQ white voters, that's just icing on the cake. They can use the racist yahoos to get themselves reelected so giant corporations will continue to stuff their SuperPACs with lobbyist cash they can use for their own retirement.

It's not about charity, although they love to say that the housing and healthcare needs of poor people should be taken care of through charity. What they're really saying is that they don't want to pay their fair share of taxes to maintain a healthy society.

It's not about Christianity, although they're constantly invoking Jesus for everything from pushing the death penalty on women who want to get an abortion to giving bigots the legal right to discriminate against gay and trans people. Jesus never once mentioned abortion and decried bigotry, but they regularly ignore and even flaunt His teachings in the Sermon on the Mount and His warnings in Matthew 25. They protect multimillionaire evangelists' tax-free status, and the preachers repay them by preaching politics from the pulpit.

It's not about saving Americans from the pandemic. Trump used the Defense Production Act to force mostly Brown and Black meatpackers back to work, not to keep Americans safe. As long as the factories are humming and the stock market is rising, a few hundred thousand dead Americans are just collateral damage.

It's not about conservatism. They're not interested in slowly or "cautiously" improving society, or "conserving" anything other than the balances in their own checking accounts. They like to use the word "conservative," but they've rendered it meaningless at best and code for "racist" at worst.

It's not about making the world a better place. They deny climate change, deregulate industries that poison our air and water, and do everything they can to screw working people out of unions, good wages and decent benefits. They're totally down with pesticides that are killing our pollinators while they poison our atmosphere with their carbon emissions, all just to make a buck.

It's not about having a better-educated electorate or populace. They've spent decades trying to destroy our public education system that was, in the 1960s, the envy of the world. When they did away with free and low-cost college education during the Reagan years they kicked off almost $2 trillion worth of student debt which is preventing people from starting families, opening small businesses, or even buying their first house. But it sure is profitable for Republican bankers!

It isn't about "culture." They do a good-old-boy NASCAR/Duck Dynasty routine to bring in the rubes, but there's no way Donald Trump would ever invite the average Republican voter with a giant flag and a pickup truck to any of his golf clubs, nor would Ted Cruz want to vacation with one of them or their families in Cancun.

It's not about "gun violence." As long as their investments in weapons manufacturers are profitable and the problem of gun violence is limited to poor- and working-class Americans, Republicans don't give a rat's ass about "gun safety." Although they're happy to use guns as a wedge issue to bring in male voters who are insecure about their own masculinity.

It's not about immigrants taking jobs from working-class Americans. Ronald Reagan stopped enforcing the laws against wealthy white employers hiring people who are here without documentation. As a result, entire industries like construction and meatpacking that once provided good union jobs have been de-unionized, their former American-citizen union employees replaced by low-wage workers without documentation. And when the spotlight gets shined on them, Republicans are more than happy to put poor, hard-working Brown people in jail but there's no way they're ever going to go after wealthy white employers. They don't give a damn about your job, particularly when they can find somebody else to do it cheaper.

It's not about America "first." Reagan and Bush the Elder negotiated NAFTA and revived the General Agreement on Tariffs and Trade (GATT) so businesses could offshore entire factories. Since the Reagan administration, over 60,000 factories have left America, along with at least 5 million jobs. Donald Trump's rewrite of NAFTA even gives American companies a huge new tax break if they move factories from America to Mexico.

At the end of the day, all Republicans care about is money. Greed is their principle animating force.

It doesn't matter how many Americans die, how many humans struggle in misery and poverty, how many children's growth is stunted or are poisoned by industrial and mining waste being poured into our air and rivers.

As long as the money keeps rolling in and their billonnaire patron's taxes remain absurdly low, that's all Republicans care about and are willing to fight for.