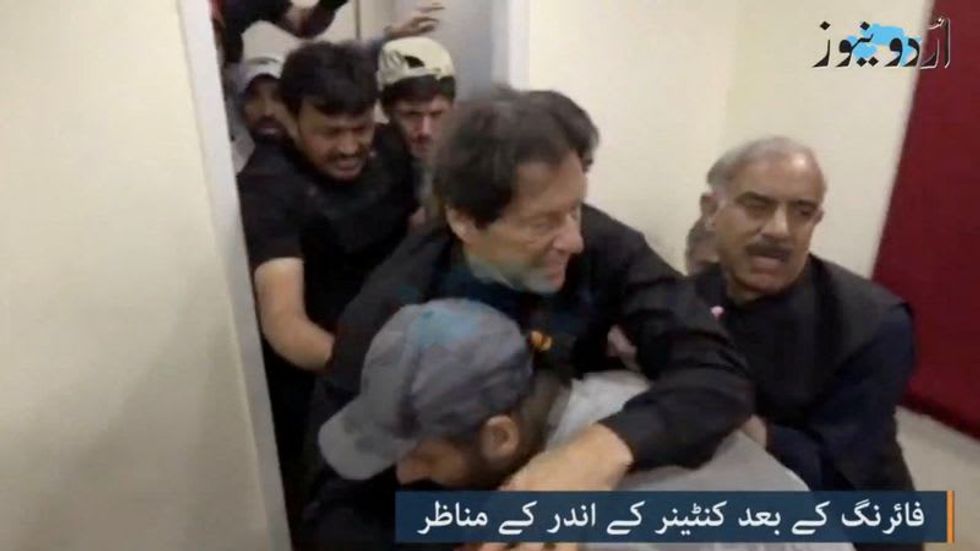 LAHORE (Reuters) -Former Pakistan Prime Minister Imran Khan was shot in the shin on Thursday when his anti-government protest convoy came under attack in the east of the country in what his aides said was a clear assassination attempt by his rivals.

Khan, ousted as prime minister in a parliamentary confidence vote in April, was six days into a protest procession bound for Islamabad, standing and waving to thousands of cheering supporters from the roof of a container truck, when the shots rang out.

Several in his convoy were wounded in the attack in Wazirabad, nearly 200 km (120 miles) from the capital. Information Minister Marriyum Aurangzeb said a suspect had been arrested.

"It was a clear assassination attempt. Khan was hit but he's stable. There was a lot of bleeding," Fawad Chaudhry, a spokesperson for Khan's Pakistan Tehreek-e-Insaf (PTI) party, told Reuters.

"If the shooter had not been stopped by people there, the entire PTI leadership would have been wiped out."

Another Khan aide, Asad Umar, said doctors had told him that their leader was out of danger.

In a video statement, Umar said Khan believed that Prime Minister Shehbaz Sharif and intelligence official Major-General Faisal Naseer were behind the attack. Umar did not provide any evidence to back the allegation.

Aurangzeb, who speaks for the government, did not respond to a request for comment on the allegation. Sharif condemned the shooting and ordered an immediate investigation.

The military’s media wing did not immediately respond to a request for comment on the allegation against Naseer.

In a previous statement, the military called the shooting "highly condemnable". Khan, 70, had accused the military of backing the plan to oust him from power. Last week, the military held a news conference to deny the claims.

"I heard a burst of bullet shots after which I saw Imran Khan and his aides fall down on the truck," witness Qazzafi Butt told Reuters.

"Later, a gunman shot a single shot but was grabbed by an activist of Khan's party."

In purported footage of the shooting, being run by multiple channels but unverified by Reuters, a man with a handgun is grabbed from behind by one of the people at the gathering. He then tries to flee.

TV channels showed a suspected shooter, who looked to be in his twenties or thirties. He said he wanted to kill Khan and had acted alone.

"He (Khan) was misleading the people, and I couldn't bear it," the suspect said in the video. The information minister confirmed the footage was recorded by police.

No one has yet been charged with the attack.

Khan - who was after his removal from office convicted by Pakistan's election commission of selling state gifts unlawfully, charges that he denied - had been whipping up large crowds on his way to Islamabad in a campaign to topple Sharif's government.

One member of Khan's party said there were reports one person had been killed in the attack.

Handsome and charismatic, Khan first grabbed international attention as a cricketer in the early 1970s.

First known as an aggressive fast-paced bowler with a distinctive leaping action, he went on to become one of the world's best all-rounders and a hero in cricket-mad Pakistan, captaining a team of wayward stars with bleak prospects to one-day World Cup victory in 1992.

His first wife, Jemima Goldsmith, who lives in Britain, expressed relief on Twitter.

"The news we dread ... Thank God he's okay," she wrote. "And thank you from his sons to the heroic man in the crowd who tackled the gunman."

Pakistan has a long history of political violence. Former Prime Minister Benazir Bhutto was assassinated in December 2007 in a gun and bomb attack after holding an election rally in the city of Rawalpindi, next to Islamabad.

Her father and former prime minister Zulfikar Ali Bhutto was hanged in the same city in 1979 after being deposed in a military coup.

Local media on Thursday showed footage of Khan waving to the crowd after being evacuated from his vehicle after the shooting as people ran and shouted.

He was taken to hospital in Lahore as protesters poured out on to streets in some parts of the country and PTI leaders demanded justice.

PTI colleague Faisal Javed, who was also wounded and had blood stains on his clothes, told Geo TV from the hospital: "Several of our colleagues are wounded. We heard that one of them is dead."

Since being ousted, Khan has held rallies across Pakistan, stirring opposition against a government that is struggling to bring the economy out of the crisis that Khan's administration left it in.

He had planned to lead the motorised caravan slowly north up the Grand Trunk Road to Islamabad, drawing more support along the way before entering the capital.

"I want that all of you participate. This is not for politics or personal gain, or to topple the government... this is to bring genuine freedom to the country," Khan said in a video message on the eve of the march.

Jen Fifield, Votebeat
Arizona officials certified the state’s midterm election results Monday after a tumultuous month of challenges to the certification process that was reminiscent of 2020 and potentially set the stage for 2024.

The certification is a milestone given the GOP’s pressure campaign demanding the election results be thrown out. But it in no way ends all possible fights over who won. Rather, it kicks off the five-day period in which lawsuits challenging the results can be filed in court and a long timeline for three statewide recounts, which are expected to stretch to the end of the month.

Secretary of State Katie Hobbs, a Democrat who was elected governor, signed off on the results at Monday’s ceremony, with the governor, attorney general, and chief justice of the Arizona Supreme Court as witnesses, as required by state law. The ceremony was closed to the public, as in 2020, mostly for security reasons, according to a Hobbs spokesperson. Before signing, Hobbs called the election transparent, accurate, and fair.

Trump left a 'time bomb' for Republicans that can blow up in 2024: former adviser

During an appearance on "CNN This Morning," former Donald Trump national security adviser John Bolton warned Republicans that they need to rid themselves of his former boss after his comments about "terminating" the Constitution or they will pay a price for it later.

Speaking with co-hosts Don Lemon, Poppy Harlow and Kaitlan Collins, Bolton also reiterated his plans to run for the Republican party nomination in 2024 if only to disrupt the former president's plans.