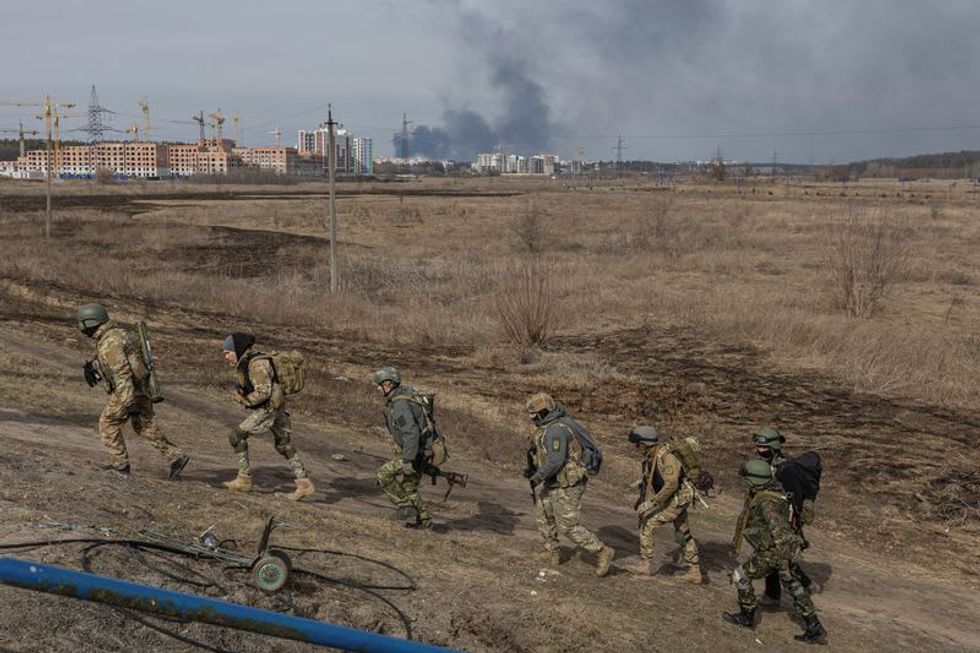 By Pavel Polityuk and Natalia Zinets

LVIV, Ukraine (Reuters) - A Russian missile attack on a large Ukrainian military facility near the border with NATO member Poland on Sunday killed 35 people and wounded 134, a Ukrainian official said.

Ukraine said foreign military instructors have previously worked at the base, but a NATO official said there were no personnel from the alliance at the base. It was not immediately clear whether any non-NATO states might have representatives there.

Regional governor Maksym Kozytskyy said Russian planes fired around 30 rockets at the Yavoriv International Center for Peacekeeping and Security, adding that some were intercepted before they hit. At least 35 people were killed and 134 wounded, he said. Reuters was not able to verify his statement.

The 360 square-km (140 square-mile) facility less than 25 km (15 miles) from the Polish border, is one Ukraine's biggest and the largest in the western part of the country.

The Kremlin did not immediately reply to a request for comment on the reported missile strike so close to the border with NATO, and a short video briefing by Russia's defence ministry spokesman on Sunday made no mention of such an attack.

Nineteen ambulances with sirens on were seen by Reuters driving from the direction of the Yaroviv facility after the reported strike and black smoke rose from the area.

"Russia has attacked the International Center for Peacekeeping & Security near Lviv. Foreign instructors work here. Information about the victims is being clarified," Ukrainian Defence Minister Oleksii Reznikov said in an online post.

A Ukrainian defence ministry representative told Reuters the ministry was still trying to establish if any foreign instructors were at the centre at the time of the attack.

Ukraine, whose aspirations to join NATO are a major irritant to Russian President Vladimir Putin, held most of its drills with countries in the Western defence alliance at the base before the invasion. The last major exercises were in September.

In the weeks before Russia invaded on Feb. 24, the Ukrainian military trained there, but according to Ukrainian media, all foreign instructors left the training ground in mid-February, while leaving all the equipment.

Russia's invasion of Ukraine, launched by Putin on Feb. 24, has sent more than 2.5 millions fleeing across borders and trapped thousands of people in besieged cities.

While Western nations have sought to isolate Putin by imposing harsh sanctions, the United States and its allies are concerned to avoid NATO being drawn into the conflict. "There are no NATO personnel in Ukraine," the NATO official said.

The mayor of another city in western Ukraine, Ivano-Frankivsk, said Russian troops also continued to hit its airport, with no initial reports of casualties.

In eastern Ukraine, Russian troops are trying to surround Ukrainian forces as they advance from the port of Mariupol in the south and the second city Kharkiv in the north, the UK Defence Ministry said on Sunday.

Kharkhiv has suffered some of the heaviest Russian bombardment. Videos from one resident, Teimur Aliev, who is helping bring aid to residents, show badly bombed buildings lining streets, burned out cars riddled with shrapnel holes and debris strewn across the ground.

"We will stitch up the wounds and the pain of our country and our city. We are ready to build it and we are ready to renew it when the war is over. We're not going anywhere," Aliev, a 23-year-old musician, said of his food distribution network, which now has dozens of volunteers.

The British intelligence also said Russian forces advancing from Crimea, which Russia annexed from Ukraine in 2014, were trying to circumvent Mykolaiv as they look to drive west towards Odesa. Air strikes on Mykolayiv killed nine people on Sunday, regional Governor Vitaliy Kim said in an online statement.

Air raid sirens again woke residents in Kyiv on Sunday morning, hours after Ukrainian President Volodymyr Zelenskiy warned Russian forces they face a fight to the death if they try to occupy the capital.

Ukraine accused Russian forces on Saturday of killing sevencivilians, including one child, in an attack on women and children trying to flee fighting near Kyiv.

Reuters was unable immediately to verify the report andRussia offered no immediate comment.

The United States said it would rush up to $200 million inadditional small arms, anti-tank and anti-aircraft weapons toUkraine, where officials have pleaded for more military aid.

The Kremlin describes its actions as a "special operation" to demilitarise and "deNazify" Ukraine. Ukraine and Western allies call this a baseless pretext for a war of choice that has raised fears of wider conflict in Europe.

Polish President Andrzej Duda warned in an interview broadcast on Sunday that the use of chemical weapons in Ukraine by Russia would be a game changer and NATO would have to think seriously about how to respond.

Western officials said on Friday that Russia might use chemical weapons in Ukraine in a "false flag" attack to provide a retrospective justification for its invasion, but there was nothing to suggest a broader use of such weapons in the war.

The United States this week described renewed Russian accusations that Washington was operating biowarfare labs in Ukraine as "laughable" and suggested Moscow may be laying the groundwork to use a chemical or biological weapon.

In comments reported by the Tass news agency, Ryabkov madeno specific threat. Any attack on such convoys before theyreached Ukraine would risk widening the war.

Russian troops have destroyed 3,687 Ukrainian military infrastructure facilities so far, Russian Defence Ministry spokesman Igor Konashenkov was quoted by Russian news agencies as saying on Sunday. It was not possible to independently verify his statement.