Only seven of Stanford's first 5,000 vaccines were designated for doctors who worked with COVID patients 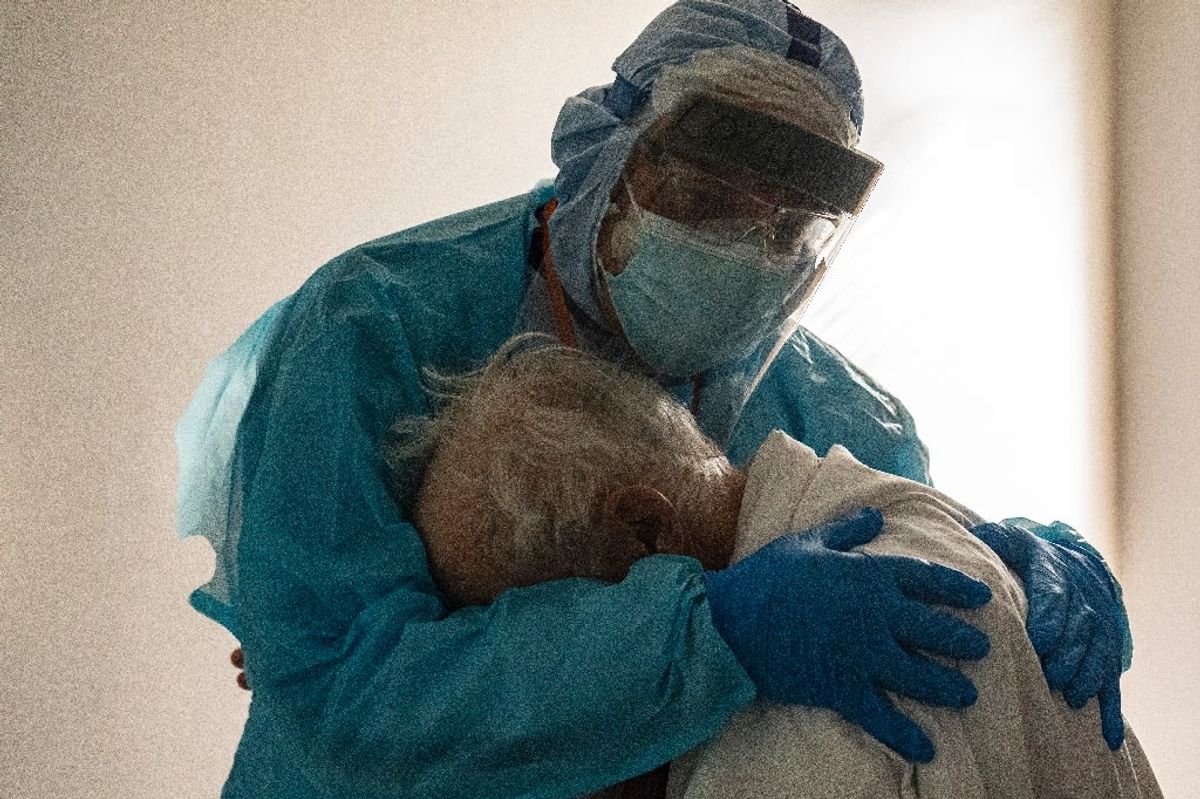 Dr. Joseph Varon comforts a patient in the Covid-19 intensive care unit during Thanksgiving at the United Memorial Medical Center in Houston, Texas

Stanford Medicine residents who work in close contact with COVID-19 patients were left out of the first wave of staff members for the new Pfizer vaccine. In their place were higher-ranking doctors who carry a lower risk of patient transmission, according to interviews with six residents and two other staff members and e-mail communications obtained by ProPublica.

“Residents are patient-facing, we're the ones who have been asked to intubate, yet some attendings who have been face-timing us from home are being vaccinated before us," said Dr. Sarah Johnson, a third-year OB-GYN resident who has delivered babies from COVID-positive patients during the pandemic. “This is the final straw to say, 'We don't actually care about you.'"

Another resident, who asked not to be named, said a nurse who works in an operating room for elective surgeries has been notified she'll get the vaccine in the first wave. “We test people for COVID before elective surgeries, so by definition, we will know if those patients have COVID," he said, so to him, it didn't make sense that that nurse would be prioritized.

“We take complete responsibility for the errors in the execution of our vaccine distribution plan," said Lisa Kim, a Stanford Medicine spokesperson. “Our intent was to develop an ethical and equitable process for distribution of the vaccine. We apologize to our entire community, including our residents, fellows and other frontline care providers, who have performed heroically during our pandemic response. We are immediately revising our plan to better sequence the distribution of the vaccine."

An algorithm chose who would be the first 5,000 in line. The residents said they were told they were at a disadvantage because they did not have an assigned “location" to plug into the calculation and because they are young, according to an email sent by a chief resident to his peers. Residents are the lowest-ranking doctors in a hospital. Stanford Medicine has about 1,300 across all disciplines.

Only seven made the priority vaccination list, despite the fact that this week, residents were asked to volunteer for ICU coverage in anticipation of a surge in COVID-19 cases.

Stanford Medicine didn't respond to a request for comment on how the vaccines were allocated and whether there was a flaw in the algorithm. The tumult reflects the difficulties of ethically parceling out a limited supply of vaccine and weighing competing factors, such as age, risk of contracting the disease and comorbidities. Adding to the challenge is the angst that comes when such decisions are made without all stakeholders involved.

In a letter to Stanford leadership sent on Thursday, the chief resident council wrote, “While leadership is pointing to an error in an algorithm meant to ensure equity and justice, our understanding is this error was identified on Tuesday and a decision was made not to revise the vaccine allocation scheme before its release today." The council asked for a timeline for vaccination of the residents and transparency regarding the algorithm.

In response to the residents' protests, Dr. Niraj Sehgal, chief medical officer, sent an email saying, “Please know that the perceived lack of priority for residents and fellows was not the intent at all." He added that with the anticipated authorization of Moderna's vaccine, “we're increasingly confident in getting everyone vaccinated, including all of you." He signed off with “heartfelt apologies."

Some departments appear to be trying to fix the problem on their own. Dr. Mary Hawn, chair of the department of surgery, confessed to being “disturbed and puzzled" by the vaccination roster that “included many of the medical staff list that aren't our physicians on the front line." She emailed her department asking people slotted for the first wave to “bring a resident that is patient facing to get the vaccine in your place" and to ask the program director for their “buddy" assignment.

She added: “Let's get this right."