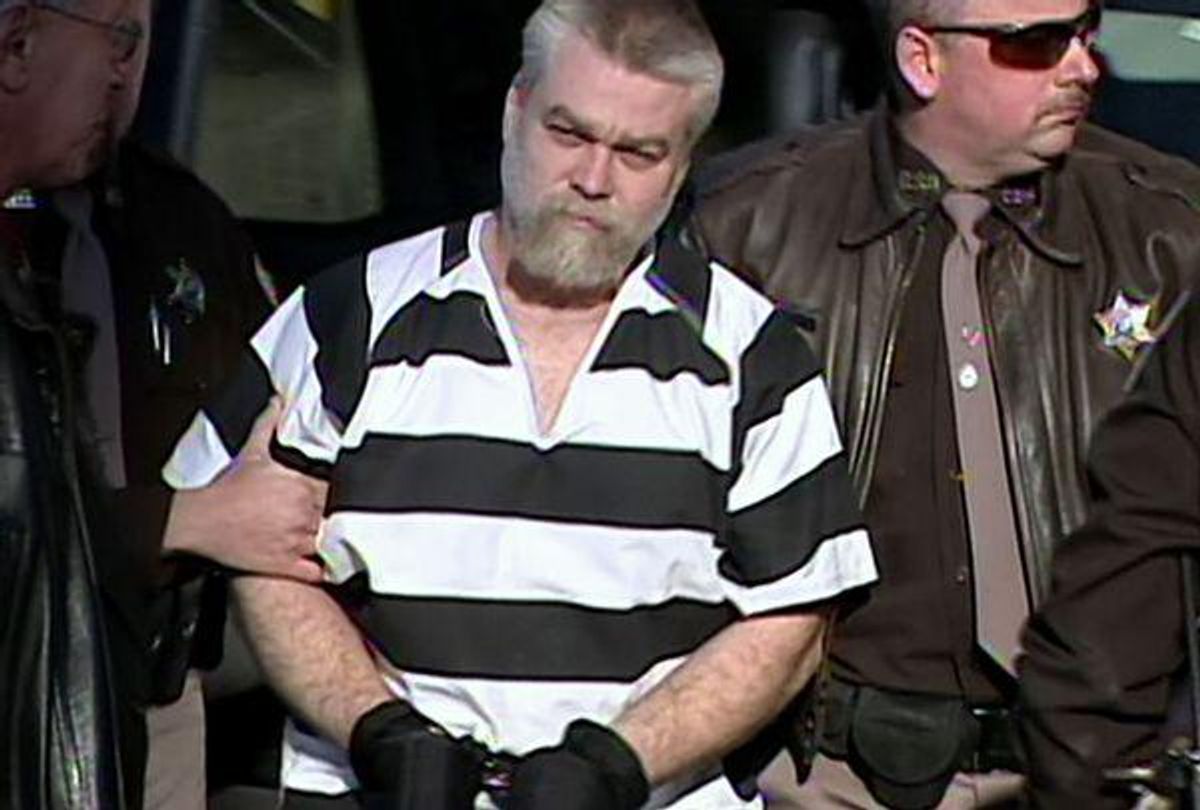 Steven Avery from "Making A Murderer" on Netflix (Netflix)

"Mr. [Thomas] Sowinski was a motor-route driver for Gannett Newspapers, Inc. and delivered papers to the Avery Salvage Yard in the early morning hours of November 5th of 2005," the motion reads. "Prior to delivering the newspapers to the Avery Salvage Yard, he turned onto the Avery property and witnessed two individuals, a shirtless Bobby Dassey ("Bobby") and an unidentified older male pushing a dark blue RAV-4 down Avery Road towards the junkyard."

As Zellner told The Patch reporter John Ferak, "this is an evidence bombshell in the Avery case."

As outlined in the popular Netflix docuseries "Making a Murderer," Avery was once already wrongfully convicted and served 18 years in prison for a sexual assault he did not commit, though was exonerated by DNA evidence in 2003. Two years later, as Avery was in the midst of civil lawsuit against Manitowoc County to recover $36 million dollars in damages for his wrongful conviction, he and his nephew, Brendan Dassey — who is Bobby's brother — were arrested in connection to Halbach's murder.

Her car, a dark blue RAV-4, was found by law enforcement on November 5, 2005, just hours after Sowinski alleges he saw it being pushed by Dassey. However, when Sowinski called the sheriff's office to file a report, he says he was told by a female officer, "We already know who did it." He was told to leave his phone number, but no one ever called to follow up on his tip. That phone call was not included in evidence during Avery's trial either.

The newly filed motion — which can be viewed in its entirety here — has left viewers of the series with some questions. Here's what you need to know about how it could impact the Halbach case.

What role did Bobby Dassey play in Steven Avery's conviction?

As Zellner mentions in the motion, Bobby "was the State's primary witness against Mr. Avery at his trial." Prosecutor Ken Kratz told the jury that Bobby was the last person to see Halbach alive and that he should be recognized for his credibility as "an eyewitness without any bias."

During the trial, Bobby told the jury that he observed Halbach, who was a photographer for Auto Trader Magazine, arrive on Avery's property and begin taking photographs of his mother's van. He testified that he then saw her walk to Steven Avery's door.

"After seeing this woman walking toward your Uncle Steven's trailer, did you ever see this woman again?" Kratz asked, to which Bobby responded, "No." He testified that when he returned from hunting later that evening, Halbach's vehicle was no longer in the driveway.

What does this mean for Steven Avery's legal case?

Zellner argues that the prosecution committed a Brady violation because they suppressed evidence that was favorable to the defense and was material to an issue at the trial.

The motion reads: "The suppressed evidence from Mr. Sowinski was favorable to the defense and material to a pivotal issue in trial because it would have 1) destroyed the credibility of Bobby as the State's primary witness; 2) established that Bobby was directly involved in the murder of Ms. Halbach; and 3) established that Bobby planted evidence to frame his uncle, Mr. Avery."

Consequences of a Brady violation can include having a conviction vacated, as well as disciplinary actions against the prosecutor.

Will this impact Brendan Dassey's conviction?

Brendan Dassey's attorneys have long maintained that his confession that he assisted in the murder of Teresa Halbach was coerced by Manitowock County law enforcement. However, after navigating through lower courts, his legal team failed to convince the U.S. Supreme Court to hear his case in 2018. His only chance at parole is in 2048; he's been serving in prison since he was 16 years old.

However, in a 2019 interview with the Daily Beast, Zellner said that if Avery is freed that may "ultimately help him" as Brendan Dassey's legal team could go back to the lower court in Wisconsin with new evidence to dispute the validity of the confession.

"But the problem in the post-conviction world is there are so many procedural hurdles," she said.

Who was the second man allegedly seen pushing the car?

According to Sowinski, the man pushing the car with Bobby was at least 6-feet tall and had a beard between 8 to 12 inches long. Zellner said in her interview with The Patch that the man does not match the description of Scott Tadych — whom she has previously theorized might be involved in the murder — and "it certainly does not match Steven Avery."

For now, the man remains unknown.