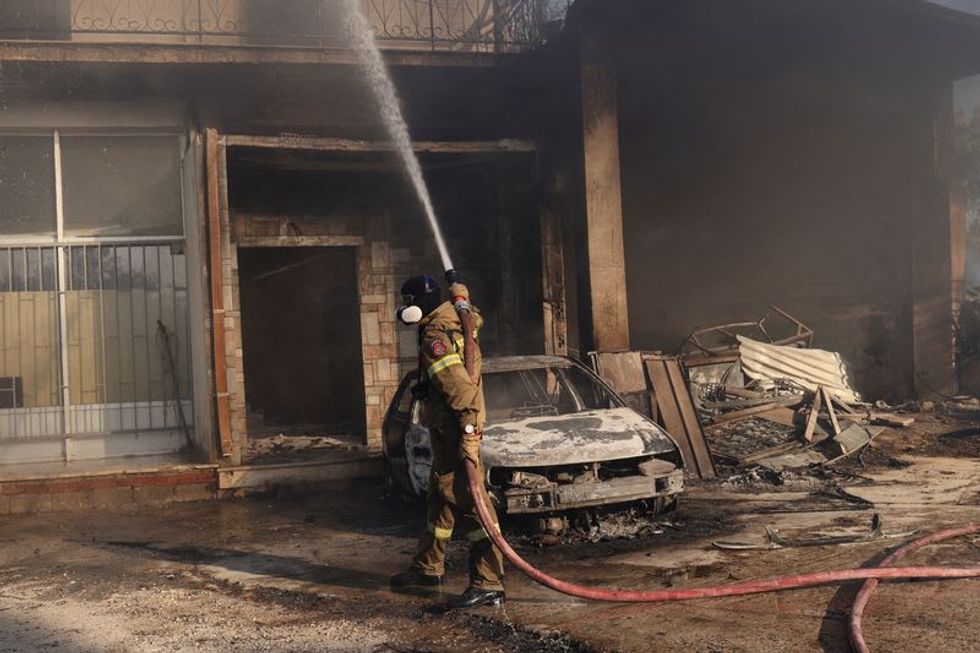 By Renee Maltezou and Kate Holton

ATHENS/LONDON (Reuters) - Emergency services battled wildfires across swathes of southern Europe amid mass evacuations on Wednesday, as warnings sounded in London after Britain's hottest day that the fight against climate change needed to be stepped up.

A blaze fuelled by gale-force winds raged in mountains north of Athens, forcing hundreds including hospital patients to evacuate, and similar numbers fled in central Italy as gas tanks caught in a forest fire near the Tuscan town of Lucca exploded.

A record-breaking heatwave, widely blamed on global warming by scientists and climatologists, settled over southern Europe last week. While the brutal temperatures it threw out have eased, mercury readings began heading higher again in Portugal and Spain.

Portugal's northern region's Civil Protection commander Armando Silva said rising temperatures and strong winds would make it harder to fight the country's largest wildfire, which has burned 10,000-12,000 hectares (38-46 square miles) since Sunday in and around the municipality of Murça.

Wildfires also burned in several areas of Italy and 14 cities, including Rome, Milan and Florence, were due to be put on the country's highest heatwave alert on Thursday, up from nine on Wednesday.

Forecasters there said that temperatures were expected to hit 40C across a swathe of the north and centre this week.

That mark was topped in Britain for the first time on Tuesday, shattering the country's previous temperature record by 1.6 degrees.

The Chief of Science and Technology of Britain's Met Office, Stephen Belcher, said that unless greenhouse gas emissions were reduced, the country could see similar heatwaves every three years.

"The sad reality is this is what the future for London and the UK is likely to look like if we don't take strong action now on the climate crisis," he said.

British engineers raced on Wednesday to fix train tracks that had buckled in the heat after firefighters, who in London endured their busiest day since World War Two on Tuesday, worked through the night to damp down wildfires.

To the south on the European mainland, major wildfires continued to rage.

In Greece, thick clouds of smoke darkened the sky over Mount Penteli 27 km (16 miles) north of Athens, where close to 500 firefighters, 120 fire engines and 15 water-carrying planes tried to contain a blaze that broke out on Tuesday and continued to burn on several fronts.

Authorities said they evacuated nine settlements. One hospital and the National Observatory of Athens were also evacuated and police helped at least 600 residents out of fire-stricken areas.

"Due to the intensity and speed of the winds, the fire constantly changed direction throughout the night," said Fire Department spokesperson Yiannis Artopios in a televised statement.

Strong winds were forecast to persist until Wednesday afternoon.

Last year, wildfires ravaged about 300,000 acres (nearly 470 sq miles) of forest and bushland in different parts of Greece as the country experienced its worst heatwave in 30 years.

In Italy, fire crews in the central region of Tuscany battled a wildfire for a third day near the town of Lucca that had destroyed some 560 hectares (2.15 square miles) of forest, authorities said.

It forced around 500 people to evacuate as the flames raged through the night, reaching some villages and causing some liquefied gas tanks to explode, the region's governor, Eugenio Giani, said on Twitter. "Some fronts have strengthened because of the wind," he added.

In the northeastern Friuli Venezia Giulia region, residents were urged to stay indoors because of heavy smoke from a wildfire that started on Tuesday in the Carso area bordering Croatia and Slovenia.

It forced state-owned shipbuilder Fincantieri to close down its plant in the port city of Monfalcone, which employs 3,000 people.

In France, where firefighters in the southwestern Gironde region have been battling since July 12 to contain huge forest fires, Agriculture Minister Marc Fesneau said more money needed to be invested to tackle such threats.

"We are having to confront a quite exceptional situation," he said, referring to damage caused in Brittany and southern France.

President Emmanuel Macron was due to visit the Gironde region on Wednesday as local authorities said improved weather conditions as France's heatwave moved east were helping the battle to contain the flames.