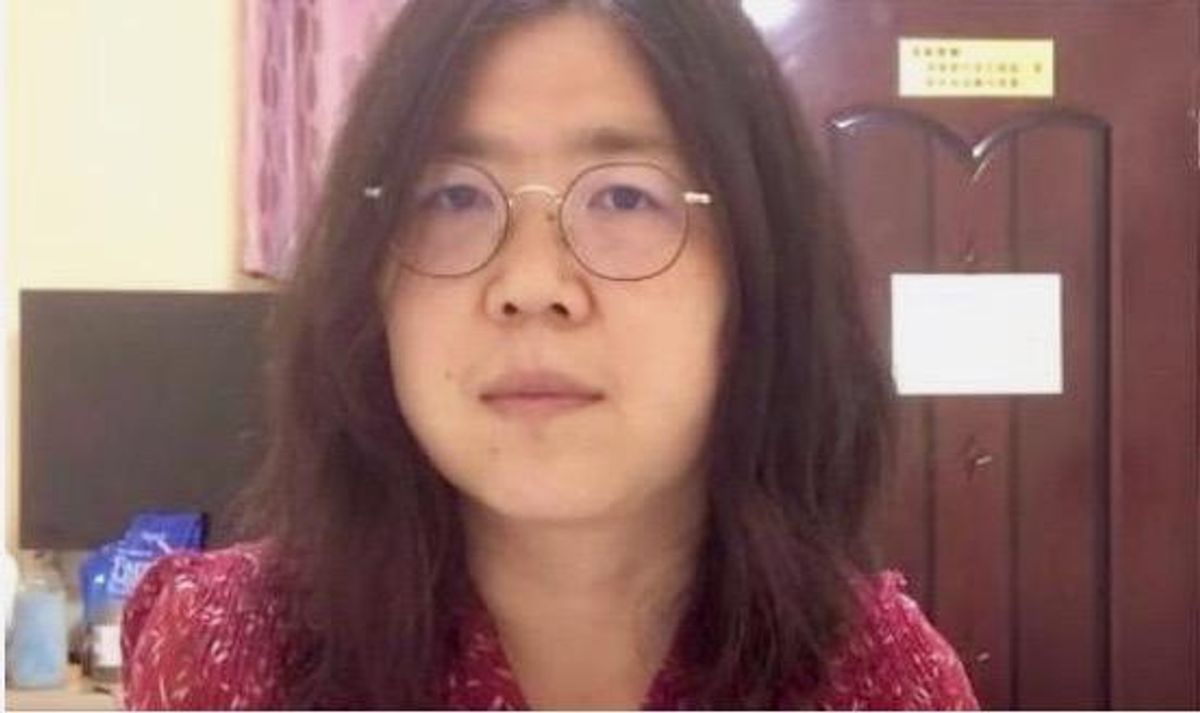 Frail and in a wheelchair from prolonged hunger strike, 37-year-old former lawyer Zhang Zhan issued a mostly silent rebuke to the Chinese legal system, before being jailed for publishing stories about the pandemic that China does not want to be told.

Zhang started reporting from Wuhan in February, questioning the lockdown of the city, access to virus testing and hospital capacity. Her videos also captured the aggression of Chinese authorities when confronted by a woman filming on her smartphone.

Her reports provided rare, unvarnished glimpses from the virus epicentre during the first months of the outbreak, in a country where sharing information unsanctioned by authorities is a perilous pursuit.

The coronavirus would soon seep across the world and blame would be heaped on China for failing to act early enough on it.

Like the three other citizen journalists who also travelled to Wuhan during the early stages of the outbreak, Zhang's reporting threatened to expose gaps in that storyline.

In one of her videos, she mentioned being under tight surveillance. Her videos and social media posts -- many on Twitter and YouTube, platforms blocked in China -- suddenly ended when she was detained by authorities in May.

Then on Monday, after seven months in detention, she was jailed by a Shanghai court for four years for "picking quarrels and provoking trouble".

Shortly before her detention, she had been trying to campaign for the grieving relatives of virus victims, who were seeking compensation -- a sensitive topic for Chinese authorities.

He was repeatedly hassled by authorities to drop her case and not to agree to foreign media interviews.

Zhang was the first of the citizen journalists known to face legal proceedings for her activities, which prosecutors deemed "fabricating lies and spreading false information".

They were all eventually detained.

"I warned her about going to Wuhan when everyone else was trying to leave," said her friend and fellow lawyer Li Dawei.

"She is a staunch Christian and said it was God's will -- she had to do this and tell everyone the truth."

The others -- Fang Bin, Chen Qiushi and Li Zehua -- have now stopped speaking out altogether. Chen and Li have reportedly returned home, while Fang's whereabouts are unknown.

In a short documentary filmed before her arrest and released after her sentencing, Zhang said an online post from a Wuhan resident motivated her to travel there in search of the truth about the outbreak.

"He said he felt like he was left there to die, I was very touched by what he wrote," she told the anonymous filmmaker, who released the film on the website China Change.

"Maybe I have a rebellious soul."

Zhang spoke little during the trial, an act of protest, her lawyers said, against the legal process and China's restrictions on free speech.

Defence counsel Zhang Keke said his client even refused to answer a judge who asked her to confirm her identity to the court.

The lawyer told AFP: "When he asked why, she replied, 'If you think I'm fabricating lies, then when I reply to your questions does that not count as fabricating lies too?'"

Her mother sobbed loudly in court as the sentence was read but Zhang was unmoved, lawyers said.

Foreign reporters and diplomats were not allowed in to observe proceedings, which concluded within three hours.

But she maintains her innocence and is likely to appeal if given the chance, her lawyers said.

She has also been on a hunger strike in protest, which has ravaged her health since her detention.

Zhang Keke said she is force-fed via a nasal tube, and has had her hands and feet restrained for long periods. As a result, she suffers chronic headaches, fatigue and stomach pain, he added.

"Perhaps her determination to resist will continue until the very end," he said.

Zhang's observations of daily life in Wuhan -- businesses struggling to recover, grieving relatives, run-ins with the police -- did not have a huge online impact, but they attracted the attention of Chinese authorities nonetheless.

Her videos also betrayed a wider discontent with China's system of authoritarian governance.

"The main way of governing the city relies on threats and intimidation," she said in one YouTube video filmed in May.

"This is the tragedy of China, of Wuhan."