Don't think of a lion

Shhhhhh! While everyone else is cursin’ and swearin’ and having a good old time at Netroots %$#@ing Nation, I think I’ll just slip in here quietly and tell a Jamie Story. Below the fold, of course. Yeah, I know I said I’d be back and posting more often. But it’s turned out to be a summer full of other things, beginning with Janet’s teaching gig in Ireland, which left me doing the single-parent drill at home for the month of June. (Though my charges are now 22 and 16, and they’re a bit more independent than they used to be.) It was good fun, though kind of exhausting at times -- because in addition to taking care of the no-longer-kids, I decided to go through the entire house and straighten things up. “Things” included junk drawers, years of school and medical records, hundreds of stray photographs, hundreds of CD cases with no CDs in them, and old videotapes of when the no-longer-kids were tiny and had squeaky little voices -- videotapes no longer compatible with any machine we own, and which I decided to convert to DVD format so that the tiny, squeaky-voiced versions of Nick and Jamie would always be at my fingertips. And oh, yes, the garage, which had been taken over by giant flesh-eating insects. In the middle of the month, this essay on gender and housework appeared in the New York Times Magazine, and I had to laugh. “Ha, ha,” I laughed. “Today I’m going to spend half my waking hours looking for things my kids have misplaced, and then I’m going to do their laundry. I don't have time to read this thing. Ha ha ha.”

So where’s the Jamie story? Right here: last fall, Janet took Jamie and me to Cirque du Soleil’s “Saltimbanco” show for my birthday. We thought it was pretty amazing, all round, and we talked for days afterward about how Cirque du Soleil had more or less saved the circus tradition from itself. (I also talked for days afterward about how it was nice to see Québec contribute something to world culture other than Céline Dion.)

But then Jamie found out that Cirque du Soleil also has a Beatles show, “Love,” and then a friend bought him the CD soundtrack of the show, and for Jamie, well, this was like a perfect storm of great stuff: Beatles and Cirque du Soleil. He had to see it! Yes, well. When I explained that the show is being performed only in Las Vegas, and not in tiny college towns in Pennsylvania, that made it even better, because, as Jamie said, we could go to Vegas “like Austin Powers.” Also, Jamie keeps track of all the states he’s been to, and he quite correctly noted, “Nevada -- we’ve never been before! Brand new! They have sharks in Nevada! Do you agree?” I assured them that yes, indeed, they had sharks in Nevada, possibly even sharks with lasers on their foreheads.

That was eight months ago. I thought about it for a long time -- it would be really extravagant, but then again, it might be really fun. Finally I priced the trip, and sadly told Jamie we couldn’t quite swing it. He’s been getting better and better at understanding abstract things -- he handles time pretty well now, but still has only the most nebulous idea of how much things cost (and whether we can afford them). He sagely suggested that if Las Vegas hotels were too expensive, we could stay in a Motel 6; I replied that I’d keep an eye out for specials and discounts. Janet, for her part, suggested that if Jamie and I did go to Vegas, we should do it while she was in Ireland.

In May, I found a pretty good deal, and told Jamie we could go if he still wanted to. The announcement was met with much hand-rubbing glee. Unfortunately, when I booked the trip after spending all dang morning online, I screwed up and booked it for the weekend of my sister’s wedding. That would have been bad. So after a few panicky seconds of wondering just what kind of preposterous story I would have to invent to explain my sudden inability to attend my sister’s wedding, I cancelled the trip and then spent another hour or two booking it again for the following weekend, at the end of June. And we were on.

We made the three-hour drive to Pittsburgh and the five-hour flight to Vegas without incident, partly because Jamie is an amazingly patient and mature traveler. But when we finally got to the massive rental-car depot, you can guess what happened: every single place was empty -- Hertz, Avis, Alamo, Enterprise, the whole gang -- except ours, Dollar, which had a line of over fifty people. (I counted.)

I turned to Jamie and said, “look, m’fren’, this is absurd. Our package includes a shuttle bus to the hotel -- let’s just take the bus, check in for the night, and come back for the rental car tomorrow.” (For those of you unfamiliar with Vegas, McCarran Airport is practically next door to the strip. It’s just one of the many spatially disorienting things about the place.) But Jamie would have none of it: “Michael,” he protested, “we have to get the car now. We have no other options.” Jamie likes this phrase, and has been trying it out for the past few months. But in this case, I assured him, he was quite wrong, and we did have other options. Still, Jamie wouldn’t budge. I reminded him that it was past 10 pm -- that is, 1 am our time -- and that the line could possibly take an hour. “It might not be that long,” said the young woman in front of us. “I do this all the time, and my guess is that this is about a half-hour line.” “OK, Jamie, are you up for a half-hour wait?” I asked. “Yes,” Jamie said. “We have to get our car.”

Well, it turned out to be a 45-minute wait, but Jamie was cool with that. At one point, to relieve the boredom I told Jamie that Vegas would be weirder than he could imagine. (I’ve been there once before, in 2000, for a speaking gig at UNLV.) The hotels would be unfathomably huge, with malls that went on forever, and he had to be careful to stick by me and not get lost. (Because that would suck.) And there would be a hotel made up like New York, and another one made up like Paris, and another one made up like Venice, with canals and gondolas. (And also with, I’m pleased to say, a place that sells Italian gelato and Krispy Kreme donuts.) There would be hotels with aquariums and casinos and waterparks -- all in the middle of the desert. Why, I said, there will even be a hotel made up like ancient Rome, with a mall inside where you can find people dressed up as ancient Romans!

“And also people dressed up as Christians,” added Jamie.

This totally cracked up the young woman in front of us.

OK, folks, back to your regularly scheduled Pandagon / Netroots %$#@ing Nation. I’ll be back when I can. And if you’d like to hear the terrible, heart-rending story of how I almost ruined the entire vacation at the very last moment before we went to see “Love” at last, let me know. In the meantime, here are two international men of mystery for you. In the Planet Hollywood lobby, about to step out for the evening. Because we too like to live dangerously. 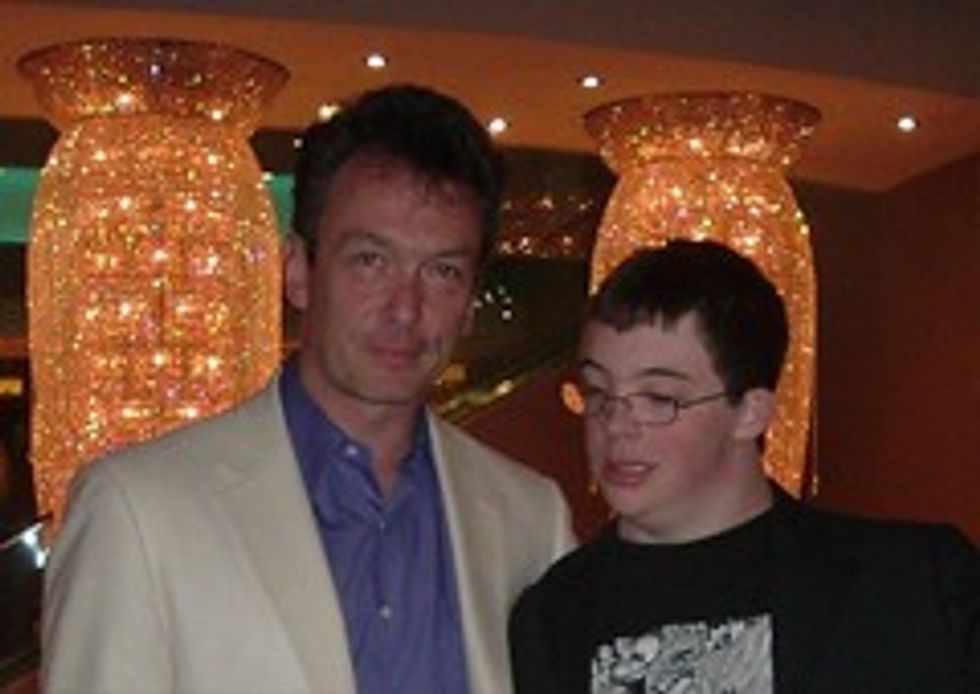