Qs of the day - Gustav and the GOP 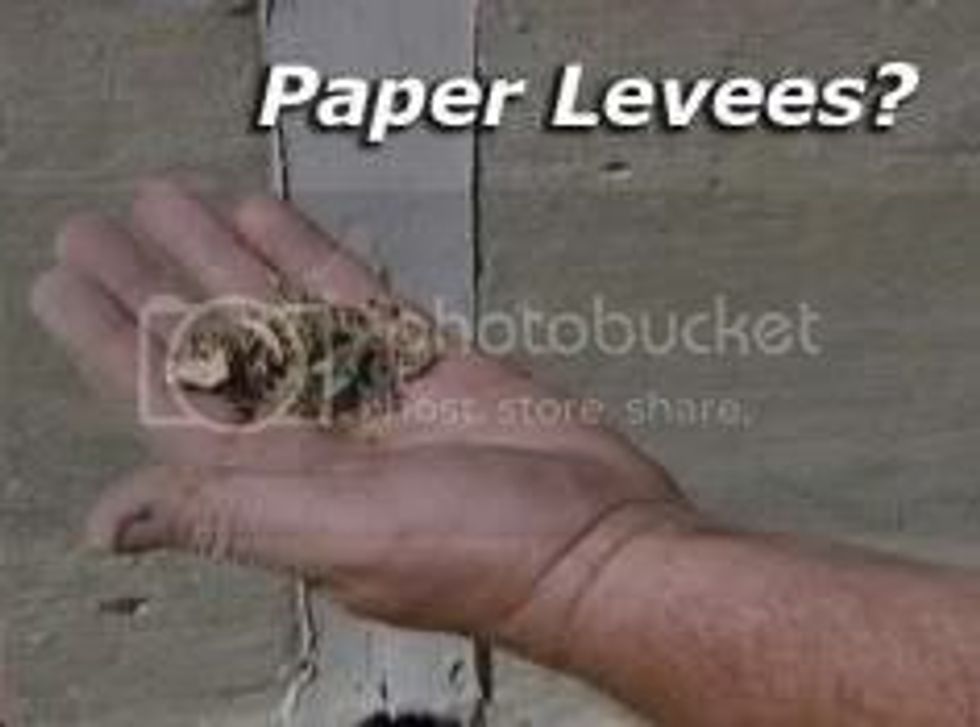 * Will the levees hold? Recently there was an investigation that uncovered the fact that newspaper was being used by a contractor hired by U.S. Army Corps of Engineers to shore up levees in St. Bernard Parish.

And when he confronted the contractor, the contractor blamed Washington for the substandard work. “He basically told me when Congress sent down the money, it would be repaired the proper way.”

But during a recent trip to the area, two years later, it was apparent that didn't happen. Much of the newspaper had deteriorated or been eaten by bugs, but some still remained. In fact WWL cameras even captured the date May 21, 2006, on a page of the Parade magazine from the Times-Picayune...The Corps also says it’s satisfied with the quality of work done by its contractor. When asked by WWL if there was any shoddy work involved, Wagner said, “I don't think so at all.”

I have little confidence that the levees will hold.

* Will the Republicans still party hard in Minneapolis while carnage goes on in the Gulf? Bobby Jindal already (understandably) canceled his plans to go to Minneapolis. How will it look as the 45K or so attendees are whooping it up?

Note on that last one -- it looks as if this impending natural disaster represents bad enough PR to force a few to stay away:

President Bush is unlikely to make it to the Republican National Convention, and Sen. John McCain (R-Ariz.) may deliver his acceptance speech via satellite because of the historically huge hurricane threatening New Orleans, top officials said.

Late Saturday night, the RNC was planning to issue a release announcing the formation of a "working group of representatives from each of the states in Hurricane Gustav's path. The group will ensure that all affected delegates have information and assistance in real time.

...Officials of the convention, the Republican Party, the White House and the McCain campaign were all scrambling this weekend to rewrite more than a year of planning for what they had hoped would be a joyful four days starting Monday.

Even worse, the GOP plans to use this as a rebranding opportunity. Of course this is disgusting, particularly since any effort to raise money from the public to help with recovery only underscores the fact that the Republican-led government is incapable of a competent response.