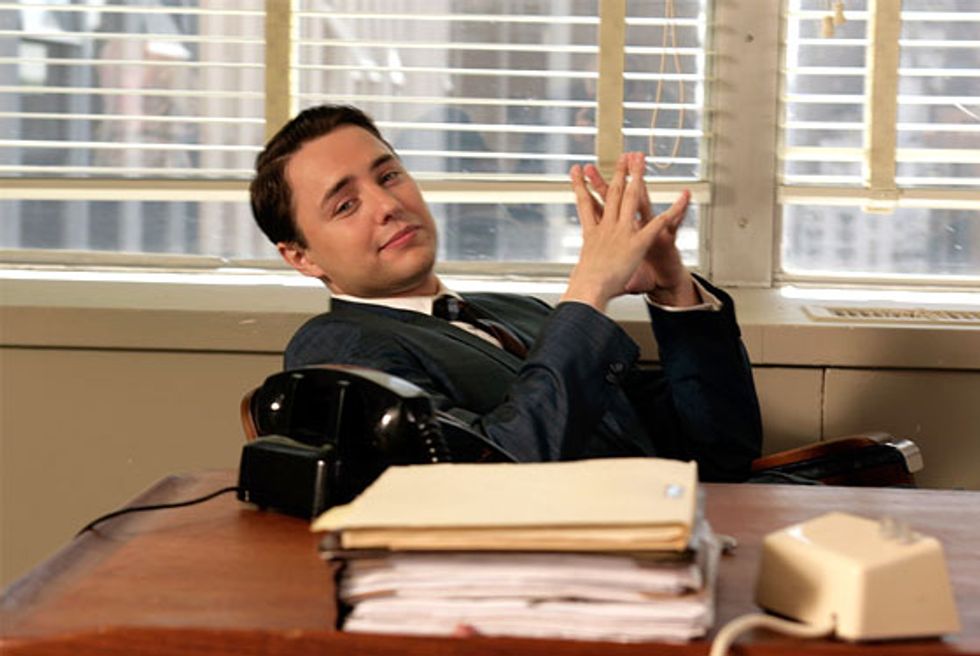 Sorry to bump it to Tuesday again. But alas, we were too busy to watch it Sunday night, so had to watch it last night. That may perhaps be the most melancholic script ever built around a birth, which is one of the touches I really appreciate with "Mad Men". Betty's hunched shoulders and pause before she went to tend to the crying infant was a heart-breaking touch. When Peggy asked Don if all this is old hat, I thought to myself that this would be a better question to ask Betty. Because it seems more and more that she's the one thinking that. The hardest part of watching them try to patch it up is that I sense that they not only love each other, but they really like each other. You see glimpses of their chemistry. But it's not each other, it's the trap that they find themselves in.

My cats want to know, Betty: What's so wrong with being a housecat?

The two parts of the episode I want to address in depth, however, are the scenes with Peggy and Pete, both together and separate. I liked, for instance, how the show demonstrated quickly how legislation mandating things like equal pay don't work that well if the only enforcement mechanism is a lawsuit. But I also have to say: Called it. Last week I noted that it seems that Peggy gets paid less than Paul for doing twice the work and holding the same title, and I wondered if she'd find the courage to ask for more. Well, she did! We know Peggy's not going to sue Sterling Cooper, but the game changer is the job offer from Duck to work for Grey Advertising. (Or, that's who I assume he works for.) It certainly seems it would fit her personality better to have a place that puts an emphasis on modernity, but I suspect that she is both loyal to Don and, understandably, afraid of what will happen if she leaves his protection. That moment between them where babies came up, and there was a pregnant pause? That was a reminder that Don knows Peggy's secret and doesn't judge her. Having a boss like that who cares about you is not something you throw away easily under any circumstances, but when you're a woman in the 60s, having that and also having a boss who doesn't sexualize you or harass you? Priceless. I wonder if Don would be more open to paying Peggy more if his boss wasn't breathing down his neck. It seems like he's more just taking advantage of the fact that he can pay her less, more than he's demonstrating an aggressive unwillingness to reward her work. I thought the scene between them subtly demonstrated how far Peggy's star has risen at Sterling Cooper---which is to say she's being treated more "like a man" every day. Don just has her sit down and pours her a drink, like he would a male coworker. In fact, she gets better treatment than anyone else down the ladder from Don in some ways. The combination of respect and reflexive sexism he exhibits towards her is something I think a lot of intelligent women have encountered in work and school from some men.

Pete Campbell's scenes in this show epitomized the concept of self-defeating behavior. Turning down a job offer from someone who wants him to fight for a job that he's got a 50% chance of losing, because he's angry at Peggy? Even allowing that he has a reason to be angry with Peggy (as understandable as her behavior was, she still gave a baby he fathered away without telling him), that's just stupid. Why hurt yourself to get back at her?

His other big screw-up, professionally speaking, was the way he managed to both a) be completely right about the way to increase sales for Admiral TVs and b) somehow piss everyone else off and make it impossible for them to see that he's right. The crucial moment was when the Admiral executives coughed up a really wrong-sounding argument for why Admiral TVs sell better with black customers, and Pete couldn't come back and argue effectively that the reason---that black customers simply wanted what they thought was "white"---was wrong. He had no research at all on what the customers on the ground were saying that they wanted. Crickets in a meeting like that are fatal.

Of course, his failure was in thinking that all he needed to find out why Admiral TVs were selling more was to harangue the elevator operator, and to ask this one guy to explain all black people to him, even though Hollis wasn't his target audience of Admiral buyers, as he'd already bought an RCA. I was thinking about Pete's belligerent insistence that Hollis was hiding What All Black People Think from him when I read about Obama's comments on Kanye West. I have my suspicions that Obama thought it wise to preempt the not-a-racist racism that holds all black people accountable for what any one black person says or does or thinks, unless they take pains to distance themselves. Though I suppose in this scene, Hollis wasn't even allowed to distance himself from Pete's demands by pointing out that he wasn't really interested in the TVs that Pete is hocking.

That said, Pete's epic failure to sell his idea of selling advertising in black-oriented publications and markets may not be completely due to his lack of people skills. Pete suffers from a permanent case of being ahead of his time. His audience wasn't ready to hear that black consumers are a legitimate audience with legitimate concerns worth speaking to because they have legitimate money to spend. This conflict between Pete, who is legitimately well-meaning but ignorant, and Roger Sterling, who isn't even slightly well-meaning, was hinted at earlier in the season (most obviously when Pete was annoyed by the black face routine), but it blew up in the post-epic-fail meeting. But maybe the fact that the new English boss was smart enough to see that Pete is on to something with his ideas will actually change the game for Pete, who feels like he's being edged out by Kenneth. One thing I know for sure: I'm interested in seeing more of how Madison Avenue processed the political and cultural changes going on out in the world, and then fed them back to the people to create the feedback loop between culture and counterculture that we all know today. Again, I have to say I called it.