When you're on the road (dealing with big ups and downs on life's roller coaster), this kind of hilarious flaming horsecrap is entertaining.

If only I had the juice (and cash) of sick, bloviating, untethered-from-reality-and-the truth Glenn Beck! The New York Times Opinionator Tobin Harshaw compares my call to shut down the gAyTM to the radical, racist, bigoted diatribes of Glenn Beck. His reasoning? 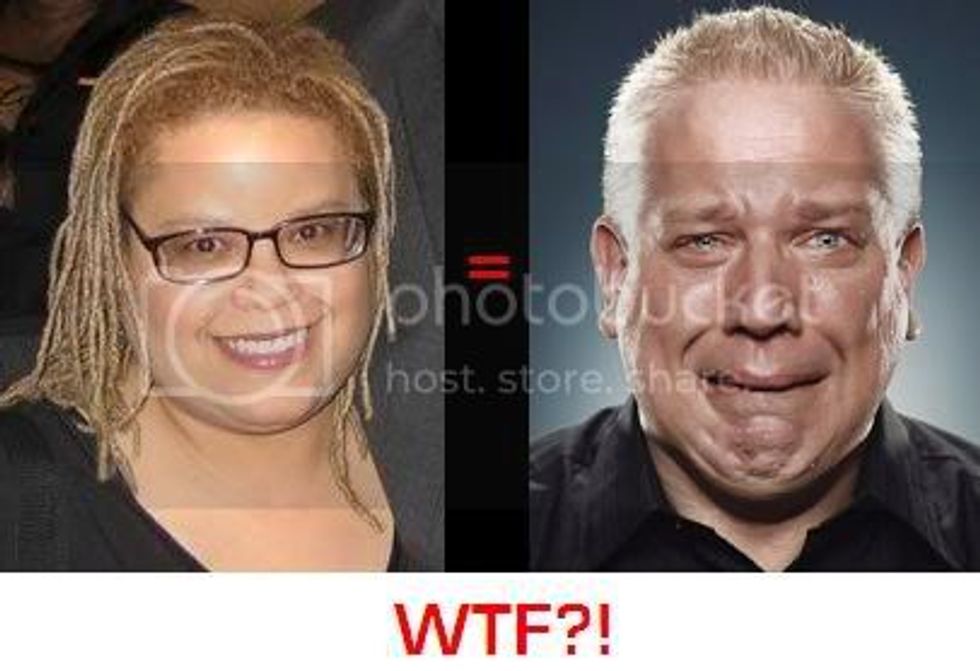 "We know that hard-line conservatives are riled up. But so are hard-left Democrats and their gay allies."

Who knew my statement was equivalent to the nut-teabaggers and a radical call to arms:

"Let's just say that a little leaked email proves LGBTs are seen as the easy gAyTM to the DNC that can be manipulated, ignored, and pickpocketed as mob rule strips us of civil rights without a finger being lifted to help at the eleventh hour," adds the influential gay blogger Pam Spaulding of Pam's House Blend. "It's worse - stripping resources at the time of need."

She offers a call to arms along the lines of MoveOn's:

I don't know about you, but at the very least, it's a peek at the kind the two-timing that goes on in national politics with constituencies they find "troublesome" or a perceived "liability" (save the $$$, of course). The difference is that the peek inside makes you realize how easily you've been had …

Shut the gAyTM down; only give directly to candidates and organizations you believe are truly working in your best interest. Not a penny to the DNC; it's the only leverage you have as an average citizen. The big donors in our community have to take a stand on this kind of nonsense, otherwise, they are enabling this kind of treatment of our community. It's party-building at our expense each and every time …

Pam, you may not like to hear it, but that last line could just as easily have come from Glenn Beck. Just goes to show: it may be entertaining to watch your enemies rip themselves apart, but you might just want to keep an eye on the guy to your left.

WTF? It's time to lay down the crack pipe, Tobin. Let's see, how do you equate a call for spending one's donation dollars wisely and directly to a candidate that supports your issues to, say, riling up teabaggers to show up in DC waving racist/Nazi signs with the President's image, calling for a revolution, stoking the fears and anxieties of the working class who are losing their jobs and homes because of the massive f*ckups of the last eight years by the man who took off in the helicopter this January as the crowds cheered "Na na na na...hey hey hey...goodbye." Please.

At least the folks in the comments had a good time shredding the comparison. A snippet below the fold.

I say to Pam Spaulding: You go girl!

Anyway, why the caution at the end of this entry? Pam is right.

I worked my butt off trying to get single payer insurance at least on the horizon, something I think should be a human right — healthcare for all of us (instead of bank CEOs with $1,000 cigars).

Then Pelosi, et al. put the kibosh on a straight floor vote that was promised publicly to Rep. Weiner, who supports single payer.

Don’t support people who don’t support you. That is the only way a representative democracy can work. Simple as that. What are we? Fools???

I’m a proud liberal, and I’m gay, and I’ve no problem with the conservatives asking their pols to vote a in certain way. There’s nothing unreasonable or RADICAL for citizens to (gasp!) demand a certain voting record from their pols & parties after spending money, time and effort getting these people elected. And yes, as it should be, people are concerned with policy issues, not coddling parties and pols or spineless centrists.

So here are the real issues from a liberal perspective: the problem with Beck and Limbaugh is that they say things that many find bigoted and untrue; and conservative dems can’t explain why progressives should be motivated to support them given they will not support many of the things we care most about.

Back to your original, laff-a-minute political progamming.