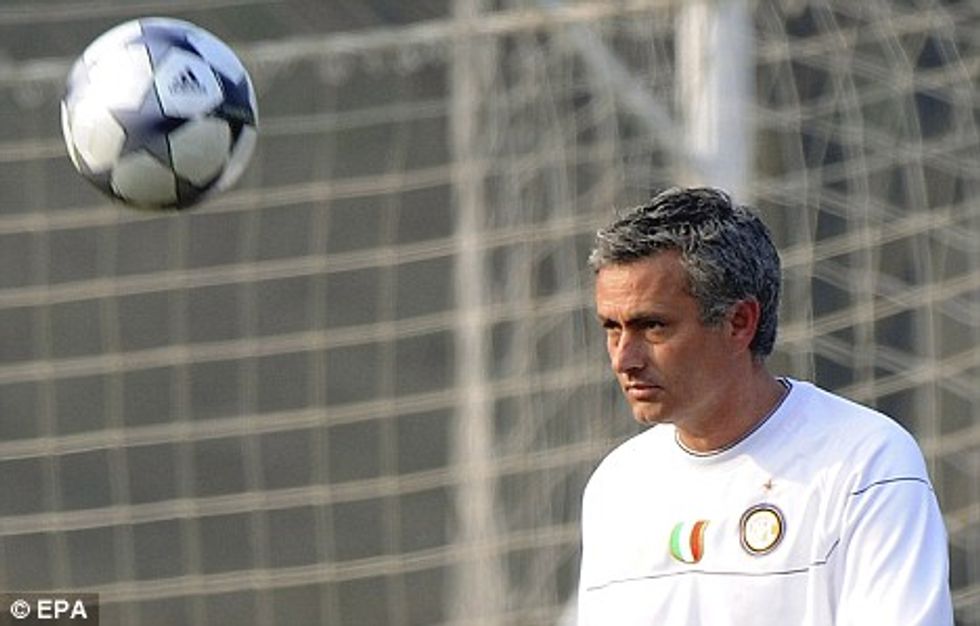 He's moving that ball WITH HIS MIND.

He beat the English Champions and his former employers. He beat the Spanish champions and defending Euro kings with some luck but also after unjustly being dropped to 10 men. And he beat the German champions in a match his team managed to dominate despite having (wanting?) the ball only 30% of the time. How could you do better in one year than beating the champions of the top 3 leagues in the world on your way to the treble?

And now he wants to move on, of course. After the dust settles on his dominance, some contrarians will peek out of their foxholes this summer and lob grenades like:

1) It's irresponsible/uncool not to stay at Inter and defend the treble.

Oh yeah? Ask Pep Guardiola if he had as much fun this season as last. Never mind that 09-10 Barca might actually beat the 08-09 version if they could play each other. And never mind that he won La Liga with a stunning 99 points in what might've been the greatest two-team race in football history. I bet he feels disappointed right now, angry and frustrated and incomplete. He's probably slamming ulcer meds because epic success cannot be topped, and now the media, fans, players, and his own conscience will never let him forget that any season without 3 trophies will fall short compared to last year. Unlike Mourinho, of course, Pep is deeply loyal to his lifelong club, so he battles on. But if you're wondering whether it's "worth it" to stick around and defend a treble, whether Mourinho will miss out on some kind of awesome adventure, the answer is no.

What is it with sports? Otherwise rational people who believe in democracy and personal freedom and such somehow demand blind and eternal fealty to a crest and a shirt, regardless of whether it's better for the person from whom they demand it. Jose gave Porto the title of a lifetime. He gave Chelsea their first English titles in almost 50 years. He delivered Inter one of the best trebles of all time. To put it another way, he sticks around until the job is done. Don't take it out on him that those who follow can't always build on his success.

Clearly, Mourinho enjoys taking over troubled teams with excellent resources and delivering titles. He loves being the savior to fans used to bitter disappointment. And by now, no one can doubt he's the best there ever was at it. Why should he stick around in the shadow of his own success if that's not the challenge that appeals to him? How can a guy who provides the best season in the history of club after club somehow be indebted to any of them in any way? If anything, they should send him shavings from any subsequent hardware earned in his wake.

Mourinho gets hired to take a team to the top of the mountain. He stays until he does that. In my book, that's plenty loyal.

3) Oooh, but he's regret going to Real Madrid this time!

[sacarsm] Yeah, lots of coaches hate being given the most talent in the world, elite footballers who are burning with desire to unseat the nemeses that just whupped them. Coaches hate being handed even more money to augment such a squad. And coaches hate taking over the most popular team in the world at a time when expectations have ebbed to the point where any trophy will do. [/sarcasm]

A lot of people believe the Galacticos can't win because there's too much 'me' and not enough 'us' in the locker room. And that's just what Mourinho wants you to think.

There's not nearly enough appreciation for how Mourinho handled Samuel Eto'o at Inter this year. He took a guy who's supposedly a clubhouse problem, asked him to play support for another striker, and got nothing but good results (and no resistance) along the way. We'll talk more about Mr. Eto'o this week, but that's impressive coaching. And it's not like his Chelsea locker room was full of giving souls, either. Yet Mourinho always finds a way to build a hell of a machine from whatever parts you give him, so I'm fairly sure he won't regret being given the best possible parts and budget on the planet.

Mourinho thrives on The Next Great Challenge. For him now, it'll be taking a 3rd team to a Champs title, overtaking what might be the best side in the world in Barca, and taming the massive egos and salaries at Real Madrid. After what he's done elsewhere, I can't actually imagine him being fully engaged by anything less.

4) He won't last long at Madrid, though!

Duh. He doesn't last long anywhere. Again, he comes in to take a team to the top, then he moves on. So yeah, when he gets weary of the Spanish media, when he does his job with Real Madrid in whatever as-yet-unknown glorious fashion, he'll move on again. Maybe a national side for World Cup glory? Maybe taking a team from relegation in a league to the title? Maybe coaching Heaven vs Hell? Who knows. But odds are he won't move on until he's earned the right, just like he has at every stop before.