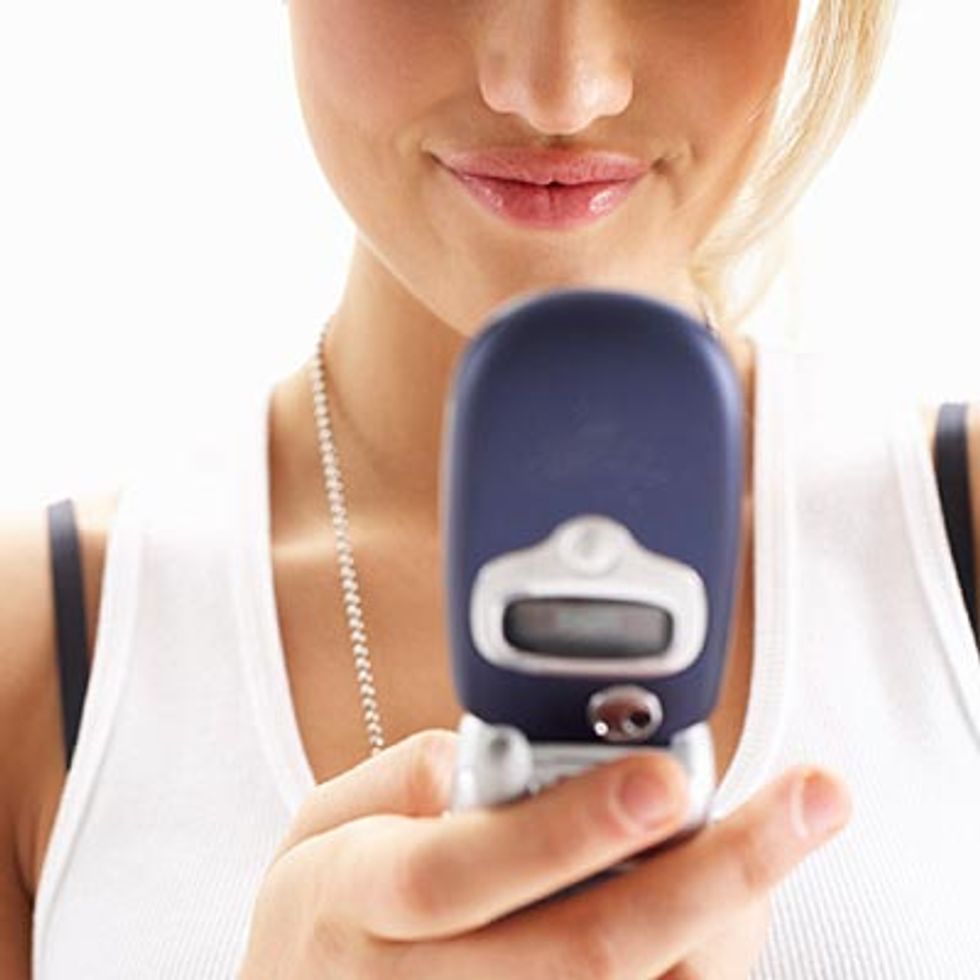 A sign near the toilet said: "Text FLUSH to Robin." Above the restroom sink was another suggestion: "Text WASH to Robin."

Was this some sort of potty-room prank? Or high-tech graffiti?

Neither, actually. The bathroom bulletins were part of a calculated campaign strategy by Democratic U.S. Senate candidate Robin Carnahan to collect as many cell phone numbers as possible for a text-message database.

In politics 2010, wireless phone numbers have become prized possessions. Landline phone calls increasingly get screened. E-mails sometimes get deleted even before they are opened. And anything looking like junk mail often ends up in the trash. But text messages get people's attention — instantly.

"From a campaign's perspective, texts are great, because there's a really high open rate for those," Carnahan said. "They pop up on your phone, so it's really easy to communicate with people quickly and know that they're seeing that piece of information."

Like many candidates this year, Carnahan is attempting to duplicate the successful social media strategies of Barack Obama's 2008 presidential campaign, which built an enormous cell phone database by promising to break the news of his vice presidential pick by text message. Obama messaged more than 1 million phones with his announcement. As the election neared, Obama texted those people again to encourage them to vote.

This year, Democrats and Republicans alike are employing gimmicks, giveaways and all sorts of grand means to gather the wireless phone numbers of likely supporters and voters.

Carnahan's Republican Senate opponent, U.S. Rep. Roy Blunt, has been traveling around Missouri in a bright blue RV emblazoned with the words: "Text JOBS to BLUNT."

On opening day for the Milwaukee Brewers, Wisconsin Sen. Russ Feingold asked people to text his campaign with predictions of who would win the mascot sausage race — Bratwurst, Polish, Italian, Hot Dog or Chorizo. (The Polish sausage won.)

California gubernatorial candidate Meg Whitman is running a text-messaging trivia contest. Those who correctly answer the question of which California team has won the most College World Series titles become eligible to win a free hat.

Anyone who texts "Tix" to 54608 — the code for the campaign of U.S. Rep. Joseph Cao, of Louisiana — is entered into a contest for two tickets to the Oct. 31 game between the New Orleans Saints and Pittsburgh Steelers.

There was a similar text-message-based contest sponsored this summer by the campaign of Senate Majority Leader Harry Reid. Las Vegas resident Matthew Sorvillo won the prize of a ticket valued at $1,000 for a prime seat at an Ultimate Fighting Championship match.

Sorvillo said through a Facebook message to The Associated Press that he had been a supporter of Reid's long before he won the contest.

That's typical of many people who sign up to receive a candidate's text messages. The goal of the texts usually isn't to target the highly sought-after independent voters but to identify hardcore supporters who can be tapped as political evangelists to their friends and neighbors.

"I see it as a way to tether your base voter to your organization," said Scott Goodstein, who ran Obama's social media efforts and counts Carnahan as one of his clients at Revolution Messaging, which provides text-messaging and social media services. "They may not reading every piece of direct mail, they may not be reading every e-mail, but people are reading every single text message."

About 4.3 billion text messages were sent daily in the U.S. last year, according to the Washington-based trade group, CTIA-The Wireless Association. There is no way to know exactly how many of those were from political campaigns, but the percentage is likely small, said Michael Becker, a director for the Mobile Marketing Association, a group that promotes text-message marketing.

Each text message can cost a campaign anywhere from a few pennies to a dime, said Phil Sweatman, president and CEO of ArX Mobile Inc., whose clients include Whitman and Cao.

For politicians to fully capitalize on the investment, they must make their text-message code as conspicuous as a campaign slogan by including it on yard signs, bumper stickers and in every broadcast or print advertisement, he said. And the text messages they send also should tie in to other media or encourage people to take particular actions.

"The political campaigns don't quite get it yet," Sweatman said. "In order to make text messaging effective, you can't look at it as a standalone technology — its got to be integrated with all your other marketing media."

Blunt, who is running against Carnahan for an open Missouri Senate seat, has made strides toward that. In addition to his RV, the "Text JOBS to Blunt" message has appeared on his website and social media sites and been mentioned during some campaign events.

"Frankly, we're trying to communicate with people in every way we can think of," Blunt said.

His campaign has been building a database of cell phone numbers since it launched in February 2009 and says so far it's sent tens of thousands of text messages — counting multiple messages to the same subscribers — providing people updates on such things public opinion polls and campaign ads. On primary election day, Blunt used text messages to help gauge voter turnout.

In Carnahan's campaign, those who texted words such as "FLUSH", "WASH" or "WAKE UP" during a Democratic conference in March have been receiving one or two text messages a week about the latest campaign developments. Nearly all of Carnahan's texts include Internet links to videos, ads or the campaign website. When the Fox News Network recently sued Carnahan's campaign alleging copyright infringement for a TV ad, Carnahan sent an urgent text message pledging to fight the suit with a link to a campaign website suggesting contributions ranging from $10 to $2,400.

Carnahan says she wasn't aware ahead of time that her campaign staff was placing the restroom posters encouraging people to text bathroom-related words. But she has embraced the general approach.

"Every new text and phone number you get is important," she said.