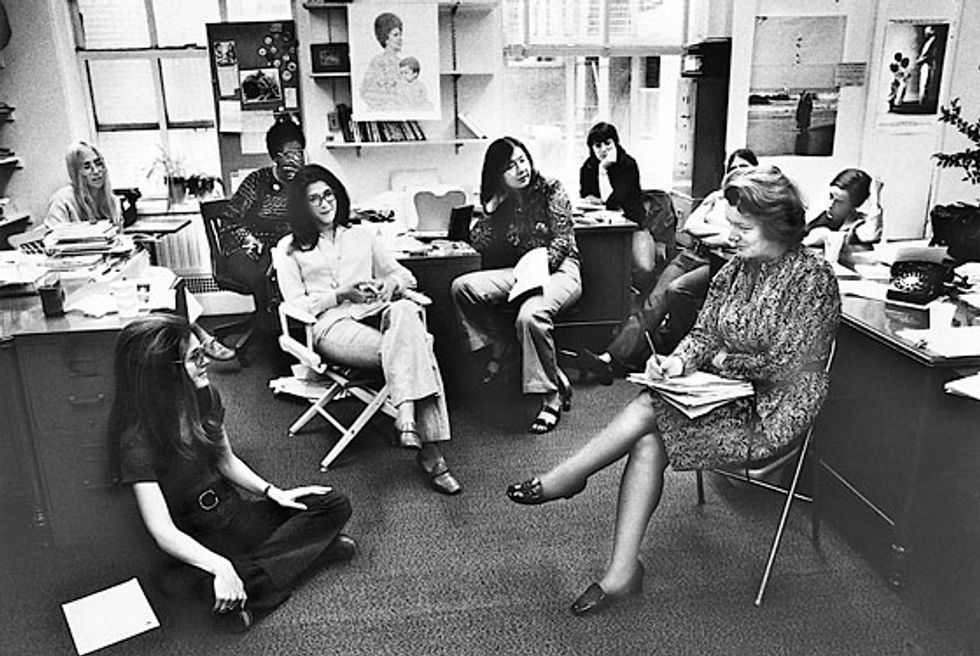 I try, and often fail, to end the week on a positive note. But this week, I can actually do that for you. Online, for obvious reasons, most of the fussing over NY Mag's look at feminist writing was over the piece on internet feminism. But I also want to recommend this piece on the history of Ms. Magazine, which may be a bit stale these days, but really had a lot to offer in the day.

And one thing really jumped out at me and made me glad. I think it can be a little depressing reading some feminist history because you really see how far we haven't come in so many ways. Back in the 60s and 70s, feminists were fighting the same forces that we're fighting on every front from sexual violence to men speaking to you like you're a child just because you have a vagina. In many ways, we've backslid; after all, we're still fighting the fucking abortion wars they really did have a reason to believe they'd won. Still, this article is a reminder that they won many important battles. The most obvious ones are things like giving women (some) access to male-only jobs---we have the legal right to them now, even if we still face discrimination. Gay rights have come a long way. Women are not only able to have their own money and property, but they're basically expected nowadays to pay as much attention to that as men. If you didn't have a credit card in your own name because you're married, people now would assume that you're a part of a religious cult, but that sort of thing was normal then.

But one thing stood out to me that isn't discussed much but is really obvious reading this: they succeeded in improving the everyday interactions between men and women.  Well, maybe not for everyone, but absolutely they did on the left. This article leaves it very clear that in supposedly liberal, pro-feminist circles back then, men still felt fully empowered to treat women like meat, or openly support this woman over that woman, career-wise, because they thought she was hot. And worse. Like this story of how Warren Beatty treated Gloria Steinem, even though he was a politically liberal guy who supported the ERA and probably considered himself a feminist sympathizer.

She said she’d had dinner with Beatty in London, and he got down on all fours and looked under the tablecloth to see her legs. She was wearing a high miniskirt, and you know, she had these perfect legs. She said to me, “Okay, look, let’s just see if Warren Beatty will do it first.”

So, that's changed a lot. There's still a lot of sexism in liberal circles, and even just sexualized idiocy like this, but it's much less and much less obnoxious. Jon Stewart isn't going to crawl under a table to leer at some woman's legs that is supposedly a colleague. On the contrary, when wingnut blogger Ann Althouse made a fuss over Jessica Valenti appearing in public with boobs still attached to her body, the male liberals of the blogosphere largely defended Jessica. In the more professional-left world that Steinem was running in, men who leer like this are the exception, and back then they were the rule. Obviously, there's flirting and hooking up, but that's not the issue here---no one is against that! But being treated like meat by the majority of your male allies, to the point where they expect to get away with shit like this? I'm sure it happens, but not that much. Not anything like it used to be. So big win on that front. Now for the world.