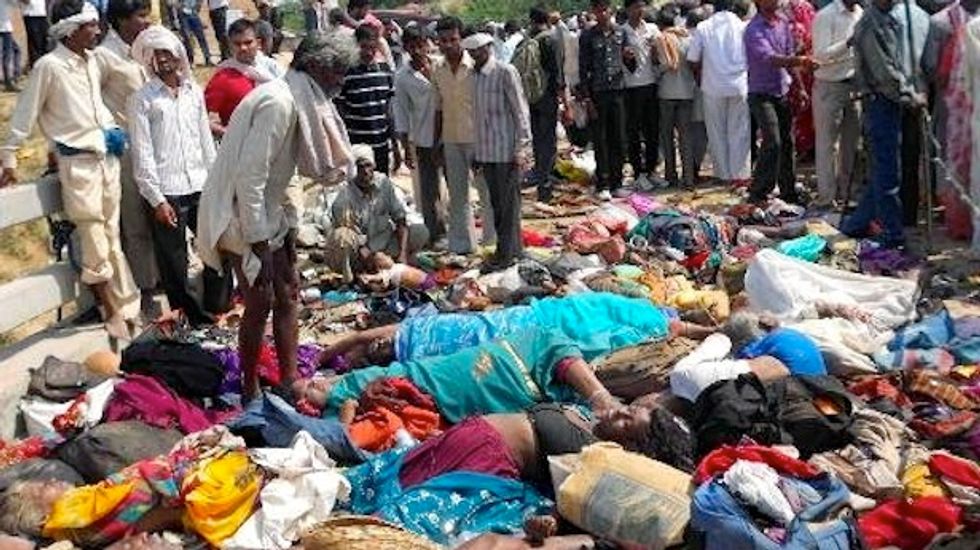 Outrage mounted in India Monday after at least 115 devotees were crushed to death or drowned near a Hindu temple, the site of another deadly stampede only seven years ago.

As survivors of Sunday's tragedy on a bridge recounted how desperate mothers threw their children into the water below, authorities came under fire over policing levels amid claims the panic was aggravated by baton-charging.

Medics were also battling to save the lives of 10 people classified as critically ill after the disaster in the town of Ratangarh in the central state of Madhya Pradesh.

"The death toll has now gone up to 115 and more than 110 injured," deputy police inspector general D. K. Arya told AFP. "Ten of those are in a very critical state."

An AFP journalist at the site said the operation to recover the bodies had been finished and police investigators were now scouring the site.

The tragedy cast a long shadow over celebrations marking the end of one of the holiest festivals in the Hindu calendar.

Police said the panic had been sparked by rumors that the bridge was about to collapse.

Up to 400,000 devotees were already inside or around the temple when the stampede took place while there were around 20,000 people on the bridge which spans the river Sindh.

Large crowds began converging on the site from early morning, according to witnesses, on the penultimate day of the nine-day Navaratri festival which is dedicated to the worship of the Hindu goddess Durga.

Monday marks the official end of the festival when devotees are expected to immerse idols in rivers as a final offering to the goddess.

The disaster comes only seven years after another stampede outside the same temple when more than 50 people were crushed to death while crossing the river, after which authorities built the bridge.

"Cops learnt no lessons from 2006 stampede", read a headline in The Hindustan Times, saying the tragedy "underlines the sheer ineptitude of the authorities responsible for the safety and security" of devotees.

Chief Minister Shivraj Singh Chouhan, a senior figure in the Bharatiya Janata Party, was facing calls to resign over the tragedy.

"Had there been adequate police, administration and health officials at the temple site, the loss of lives could have been averted," said Kantilal Bhuria, the leader of the Congress party in the state.

Manoj Sharma, one of the survivors, described a scene of utter mayhem.

"People were jumping off the bridge to save themselves, but they could not swim against the tide. I also saw children being tossed from the bridge, only to be washed away," he told the Times of India.

"I saw a mother desperately trying to protect her baby amidst the swelling, rushing crowds. But both died before my eyes. It was most horrific incident of my life."

"It was a huge administrative lapse on part of the state government. There were no policemen to control the crowds. Big vehicles carrying devotees were allowed to ply on the bridge and this caused the tragedy."

Another survivor told the CNN-IBN news channel that the police had charged into the crowds, wielding baton sticks known as lathis.

"There was a huge crowd and the police started lathi-charge. It caused panic and the people were killed," the unnamed witness told the network.

Uma Shankar Gupta, the state's home minister, said authorities had not yet determined why the stampede had broken out, but downplayed suggestions that security was inadequate.

"There were safety measures in place, this is an annual event," he told reporters.

"We don't yet have information on how this happened, as our focus is on the rescue effort."

Prime Minister Manmohan Singh led the condolences for the victims.

"On this day of festivities, our hearts and prayers are with the victims and their families," Singh said in a statement.

India has a long history of deadly stampedes at religious festivals, with at least 36 people trampled to death in February as pilgrims headed home from the Kumbh Mela religious festival on the banks of the river Ganges.

Some 102 Hindu devotees were killed in a stampede in January 2011 in the state of Kerala, while 224 pilgrims died in September 2008 as thousands of worshippers rushed to reach a 15th-century hill-top temple in Jodhpur.