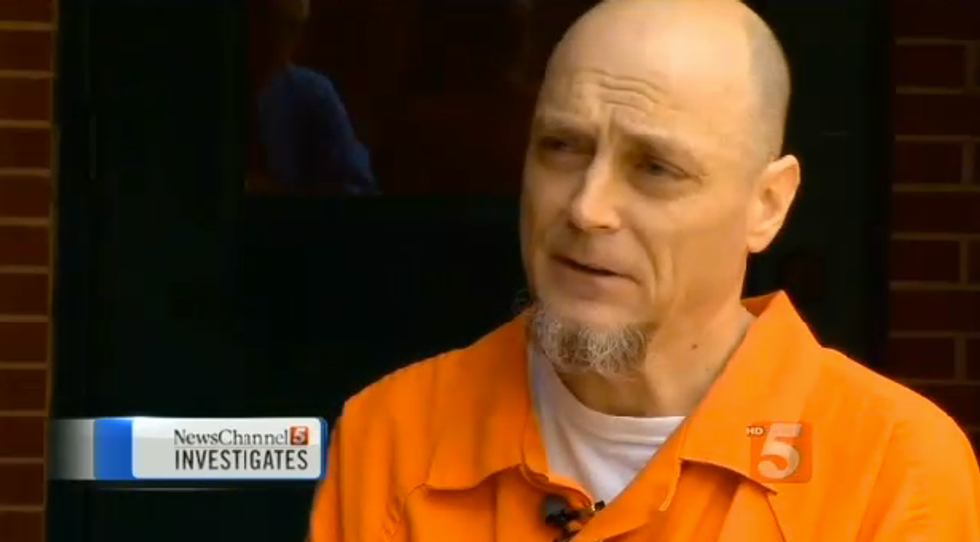 A county commissioner in Tennessee and two other men are under investigation after an inmate accused them of torturing him over a failed business deal.

The alleged victim, Kenneth Cooper, has a history of mental illness, is an admitted gambling addict and goes by the nickname, “Slim Shady,” but WTVF-TV reports that video appears to back his claims.

Cooper says his partners invested up to $20,000 in hopes of getting “big returns and things like that,” but he admits his gambling problem led him to rip off his friends and partners.

Cooper, who’s awaiting sentencing on weapons charges for pulling a gun on Young, said the three investors assaulted him at Hutson’s home in downtown Murfreesboro, and he says the county commissioner attacked him first.

"Matt Young came behind me with a dog collar," Cooper said. "He repeatedly started choking me with it. One of the men said, 'Stop, he's turning purple.'"

Hutson then confronted him with a gun, Cooper said, although he doubts it was loaded at the time.

"He slapped me in the head with his hand, and they were repeatedly asking when they were going to get money back," Cooper said.

He told the men he’d return their money soon, but he said they didn’t believe him.

“They kept on slapping me upside my head, and one of them burned me with a cigarette on my hand and said, 'You're going to tell us when or it's going to get worser,'" Cooper said.

Cooper told police that Felsher burned him with the cigarette and smacked him in the head with a huge ring, drawing blood.

He also said Young and Hutson called a friend, Rutherford County Sheriff Robert Arnold, and told him that Cooper had confessed to selling them counterfeit tickets and wanted him arrested.

But a Rutherford County detective refused to arrest him, the station reported, because they didn’t have a warrant.

Interrogation video shows Cooper after Young and Hutson had brought him to the sheriff’s office for questioning.

"It kind of surprised me that they took me to the sheriff's department because I still had blood on me,” Cooper said.

The video shows Cooper pointing out his injuries to the detective, who asks why the other men brought him to the sheriff’s office if they’d assaulted him.

"I would say they were trying to use their influence or something like that to try to scare me to make sure they would be getting their money back," Cooper said.

He claimed that Hutson admitted that he intended to use his influence to pressure Cooper into returning the money.

"He came out with the reply, 'This is my county. You don't have the kind of connections here. You're going to see very quickly today,'" Cooper said. "I think it was 100 percent they took me there to intimidate me."

After talking with the detective, Cooper said he wanted to leave with his accused attackers.

He told authorities he did so because he would have been homeless if he’d turned against them, and Young and Hutson later told the detective they didn’t want to prosecute Cooper.

"I feared for these guys,” Cooper said. “I never knew what they were going to do next."

All three men declined to be interviewed on camera by WTVF, but they indicated that Cooper was a scam artist who was trying to cover up his own misdeeds by accusing them of assault.

Police said they’ve nearly completed their investigation but didn’t say whether any charges would be filed.