Jonah Goldberg is kind of a dick about other people's misfortunes

Like you, leading conservative thinking person and re-interpreter of word meanings, Jonah Goldberg, enjoys a good belly laugh, a guffaw, a hoot and a holler, a shit and a giggle. And being the jolly sort that he is, he has a remarkable capacity for finding the funny in the most unlikely situations. No, it's true! Take, for example, the problems that people are having with attempting to acquire government-supported health insurance for their families  at a time when insurance companies and conservative legislators are doing everything they can to drown their hopes in a bathtub:

To paraphrase Oscar Wilde, you’d have to have a heart of stone not to laugh at the unraveling of Obamacare.

First, the obligatory caveats. It is no laughing matter that millions of Americans’ lives have been thrown into anxious chaos as they lose their health insurance, their doctors, their money, or all three. Nor is it particularly amusing to think of the incredible waste of time and tax dollars that has gone into Obamacare’s construction. And the still-unfolding violence that this misbegotten legislation will visit on the economy and our liberties is not funny either. This very magazine has been downright funereal about the brazen and unconstitutional seizure of one-sixth of the economy, and rightly so.

But come on, people.

If you can’t take some joy, some modicum of relief and mirth, in the unprecedentedly spectacular beclowning of the president, his administration, its enablers, and, to no small degree, liberalism itself, then you need to ask yourself why you’re following politics in the first place. Because, frankly, this has been one of the most enjoyable political moments of my lifetime. I wake up in the morning and rush to find my just-delivered newspaper with a joyful expectation of worsening news so intense, I feel like Morgan Freeman should be narrating my trek to the front lawn. Indeed, not since Dan Rather handcuffed himself to a fraudulent typewriter, hurled it into the abyss, and saw his career plummet like Ted Kennedy was behind the wheel have I enjoyed a story more.

Well, sure, who doesn't initially think the whole insurance mess must be terrible and awful and confusing for people who are deeply concerned about taking care of themselves and their families ... but then: LOL! Mary Jo Kopechne. BOOM! Amirite? And, since today Obamacare has been officially designated as "Obama's Katrina" Day, let's recall the last time bad things happened to good and innocent people and how Jonah Goldberg used that magical word alchemy of his to convert H20 into nitrous oxide:

I think it’s time to face facts. That place is going to be a Mad Max/thunderdome Waterworld/Lord of the Flies horror show within the next few hours. My advice is to prepare yourself now. Hoard weapons, grow gills and learn to communicate with serpents. While you’re working on that, find the biggest guy you can and when he’s not expecting it beat him senseless. Gather young fighters around you and tell the womenfolk you will feed and protect any female who agrees to participate without question in your plans to repopulate the earth with a race of gilled-supermen. It’s never too soon to be prepared.

You see, it's funny because it's true: 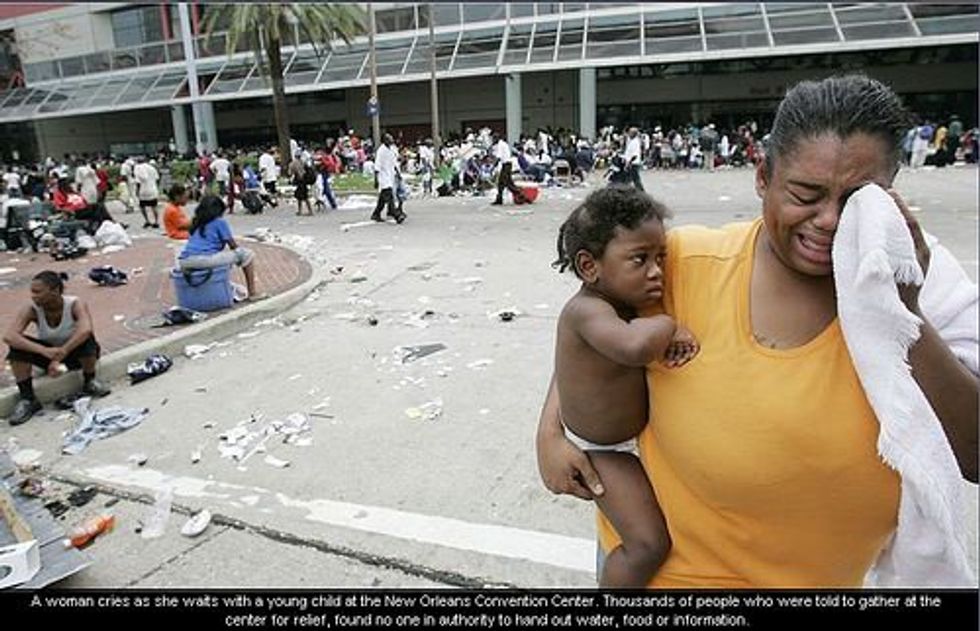