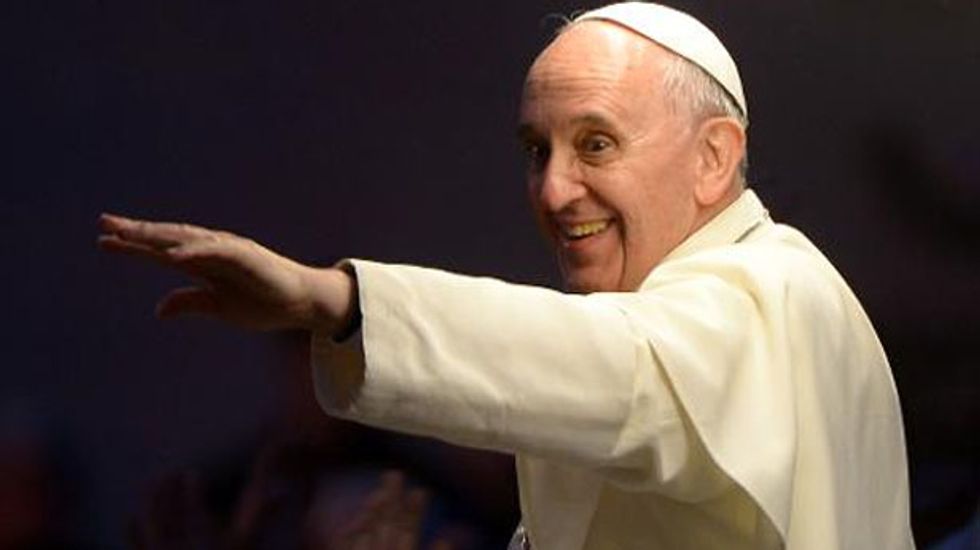 In case there was any doubt left, Pope Francis made it clear that he shares little in common with U.S. conservatives.

The pontiff released his Evangelii Gadium, or Joy of the Gospel, attacking capitalism as a form of tyranny and calling on church and political leaders to address the needs of the poor.

“As long as the problems of the poor are not radically resolved by rejecting the absolute autonomy of markets and financial speculation and by attacking the structural causes of inequality, no solution will be found for the world’s problems or, for that matter, to any problems,” the pope said in the 224-page document that essentially serves as his official platform.

Pope Francis said that inequality was the root of social ills, and prayed for world leaders with more empathy and sense of social justice.

“I beg the Lord to grant us more politicians who are genuinely disturbed by the state of society, the people, the lives of the poor!” Pope Francis wrote. “It is vital that government leaders and financial leaders take heed and broaden their horizons, working to ensure that all citizens have dignified work, education and healthcare.”

The pope has already drawn the ire of some conservative Catholics, particularly in the U.S., for his open-minded comments on social issues such as homosexuality, abortion and contraception, and he’s also previously criticized capitalism for promoting greed.

But his latest statements put those concerns into sharper focus – and puts him in sharp contrast to American conservative leaders who prize the unfettered free market and promote the Randian theory of objectivism, or rational self-interest.

“I am interested only in helping those who are in thrall to an individualistic, indifferent and self-centered mentality to be freed from those unworthy chains and to attain a way of living and thinking which is more humane, noble and fruitful, and which will bring dignity to their presence on this earth,” the pope wrote.

“Some people continue to defend trickle-down theories which assume that economic growth, encouraged by a free market, will inevitably succeed in bringing about greater justice and inclusiveness in the world,” Pope Francis wrote. “This opinion, which has never been confirmed by the facts, expresses a crude and naïve trust in the goodness of those wielding economic power and in the sacralized workings of the prevailing economic system.”

The pope lamented that people had “calmly accepted (the) dominion” of money over themselves and society, which he said was expressed in the recent financial crisis and the continuing promotion of consumer-based economies.

“We have created new idols,” the pope wrote. “The worship of the ancient golden calf has returned in a new and ruthless guise in the idolatry of money and the dictatorship of an impersonal economy lacking a truly human purpose. The worldwide crisis affecting finance and the economy lays bare their imbalances and, above all, their lack of real concern for human beings; man is reduced to one of his needs alone: consumption.”

The pope decried the growing gap between rich and poor as a social and political problem.

“This imbalance is the result of ideologies which defend the absolute autonomy of the marketplace and financial speculation,” Pope Francis wrote. “Consequently, they reject the right of states, charged with vigilance for the common good, to exercise any form of control. A new tyranny is thus born, invisible and often virtual, which unilaterally and relentlessly imposes its own laws and rules.”

The pope noted that corporations and individuals were failing to pay taxes in nations around the world, depriving governments of funding needed to serve all their citizens, and banks and loan organizations had crippled emerging economies with staggering interest obligations.

“The thirst for power and possessions knows no limits,” Pope Francis wrote. “In this system, which tends to devour everything which stands in the way of increased profits, whatever is fragile, like the environment, is defenseless before the interests of a deified market, which become the only rule.”

Pope Francis said this political and economic system was inherently sinful because it violated the biblical prohibition against killing.

“Such an economy kills,” he wrote. “How can it be that it is not a news item when an elderly homeless person dies of exposure, but it is news when the stock market loses two points? This is a case of exclusion. Can we continue to stand by when food is thrown away while people are starving? This is a case of inequality. Today everything comes under the laws of competition and the survival of the fittest, where the powerful feed upon the powerless. As a consequence, masses of people find themselves excluded and marginalized: without work, without possibilities, without any means of escape.”

The pope said that human beings themselves are used and discarded as mere consumer goods in this “disposable culture.”

“It is no longer simply about exploitation and oppression, but something new,” Pope Francis wrote. “Exclusion ultimately has to do with what it means to be a part of the society in which we live; those excluded are no longer society’s underside or its fringes or its disenfranchised – they are no longer even a part of it. The excluded are not the ‘exploited’ but the outcast, the ‘leftovers.’”