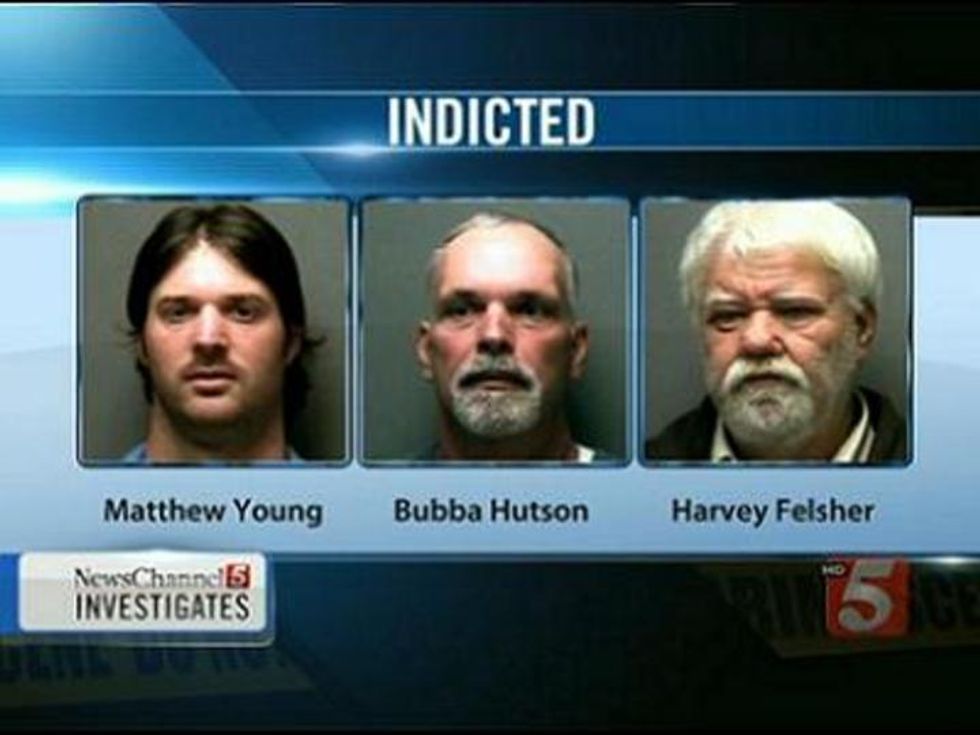 A Tennessee county commissioner and two other men were arrested Thursday on charges that they tortured a business partner in a ticket scalping operation over phony tickets to a show by pop idol Justin Bieber.

According to Nashville's News Channel 5, a Rutherford County grand jury issued indictments for Commissioner Matthew Young of Murfreesboro, businessman Bubba Hutson and Mississippi resident Harvey Felsher. The three men turned themselves in at the Rutherford County Jail at around 10:45 on Thursday morning. All were booked and released on $100,000 bond each.

Ticket scalper Kenneth Cooper alleges that the other men invested tens of thousands of dollars in his scalping business, but that things turned ugly over a set of counterfeit tickets to a Justin Bieber show at Nashville's Bridgestone Arena.

"They confronted me and put a dog collar behind my neck and repeatedly burned me with cigarettes," Cooper said to Channel 5.

Cooper has a history of mental illness and gambling addiction, a lengthy criminal record and goes by the nickname "Slim Shady," but there is video evidence to back up some of his claims.

He told authorities that Felsher, Young and Hutson gave him $20,000 for tickets to the Bieber concert which they intended to resell at inflated prices. Cooper gambled the money away and tried to make fake tickets to cover his tracks, but the three men figured him out and reportedly attacked him in Hutson's Murfreesboro home.

Cooper claimed that the county commissioner attacked him first.

“Matt Young came behind me with a dog collar,” Cooper said to Channel 5. “He repeatedly started choking me with it. One of the men said, ‘Stop, he’s turning purple.’”

Then men threatened him with a gun, burned him with cigarettes and beat him, then called Rutherford County Sheriff Robert Arnold, a friend of Young's, demanding Cooper's arrest.

Detectives refused to arrest Cooper without a warrant for failing to come through on an illegal ticket scalping venture, but the three men took him to the sheriff's office anyway.

“It kind of surprised me that they took me to the sheriff’s department because I still had blood on me,” Cooper said.

In videotape of Cooper's conversation with detectives, it is clear that he has been hurt, lending credence to his claims of abuse.

Hutson and Felsher deny the charges, saying that Cooper is a con-artist.

"You have become a victim like us -- being deceived by Mr. Cooper," said Felsher to reporters as he entered the Rutherford County Jail.

Cooper is currently incarcerated at the Christian County Jail in Hopkinsville, Kentucky on charges connected to a previous altercation with Young that took place in 2012.

Watch video about this story, embedded below via News Channel 5: