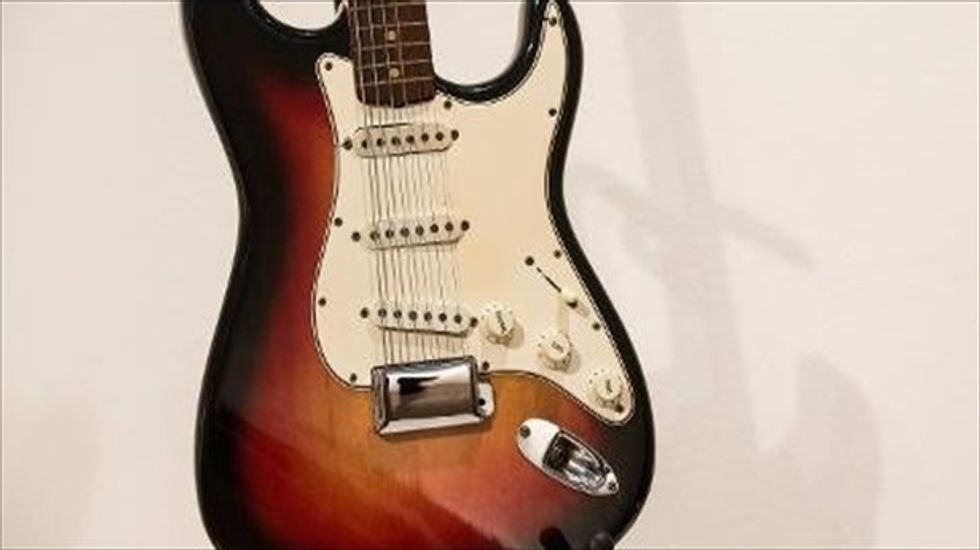 The Fender Stratocaster electric guitar played by musician Bob Dylan on July 25, 1965 at Newport Folk Festival is seen at an auction preview at Christie's on Nov. 25, 2013 in New York City [AFP]

An electric guitar on which Bob Dylan performed a legendary set at the Newport Folk Festival in 1965 sold for a record $965,000 at an auction in New York on Friday, Christie's announced.

The price for the 1964 Fender Stratocaster smashed its pre-sale estimate of $300,000-$500,000 and made it the most expensive guitar ever sold at auction, Christie's said.

The identity of the private buyer was not revealed.

The sale came just days after it was revealed that the legendary American singer has been charged in France for inciting hatred by comparing Croats to Nazis in remarks to Rolling Stone magazine.

Dylan, 72, was charged with the offense during a visit to Paris last month after the comments made last year sparked a complaint from the Council of Croats in France (CRICCF).

"If you got a slave master or Klan in your blood, blacks can sense that. That stuff lingers to this day. Just like Jews can sense Nazi blood and the Serbs can sense Croatian blood," Dylan was quoted as saying in an answer to a question about race relations in the United States.

Dylan was informed of the charges while in Paris for three concerts -- a visit during which the French government also awarded him its prestigious Legion d'honneur.

The charge against him carries a maximum sentence of one year in prison and a fine of up to $61,600, although usually penalties are far smaller, sometimes only symbolic.

Dylan has not commented on the charges.

His three-song electric set at the Newport Folk Festival in Rhode Island saw the then 24-year-old evolve from folk-protest singer into an enigmatic rock legend.

Rolling Stone described it as one of the most notable events in music history, but his folk fans were furious.

The guitar and lyrics are in the possession of a daughter of the pilot who flew the private jet used by Dylan and his band in the months after the performance.

Born Robert Allen Zimmerman in 1941, Dylan was the voice of a generation and a giant in the history of American music.