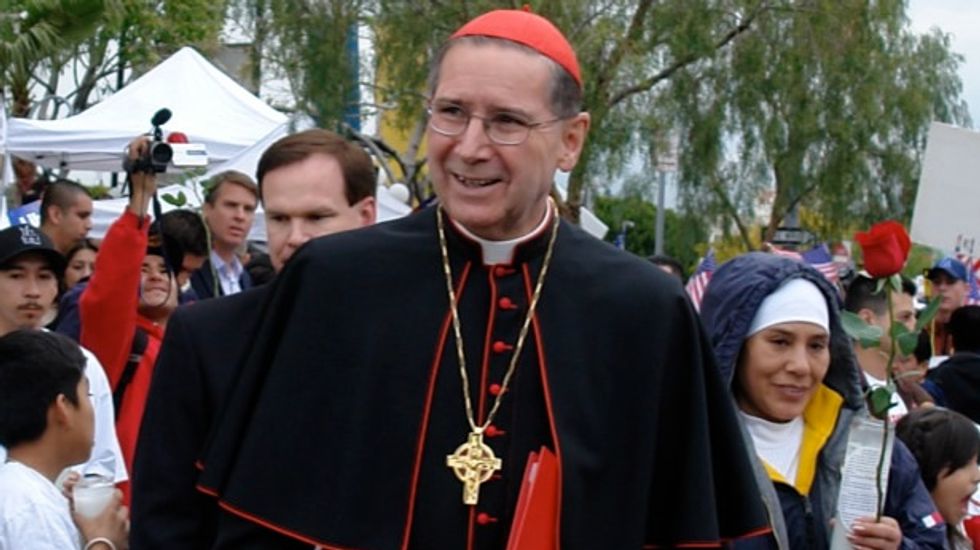 The Los Angeles Times has published an exhaustive account -- based on over 23,000 pages of internal documents from the Archdiocese of Los Angeles -- of the former Archbishop of Los Angeles's complicity in the Catholic Church's child abuse scandal.

The article documents Roger Mahony's involvement at all levels of the attempted cover-up of priests who molested children, beginning with the day in December 1986 when Father Michael Baker confessed to Mahony that he had molested two boys.

According to Mahony in a video deposition, his initial reason for not reporting Baker to the police was that "you only call the police when you've victims that you can talk to," because "the suspected child abuse form" contains "a big section about each victim and the victim's parent, so you, obviously, if you can't fill out the form, you can't send it in."

Instead of reporting Baker to the police, he had him sent to a church-run clinic in Jemez Springs, New Mexico, where they "treat pedophilia." When abusers were sent to therapists outside the church, Mahony and his aides selected ones they knew would not report the abuse to authorities.

Once the archdiocese was made aware of abuse allegations, Detective Dale Barraclough of the Los Angeles Police Department's Sexually Exploited Child unit told the Times, "we knew that the suspect, 99% sure, that he was going to be out of the country or out of state."

The Times investigation reveals that this was a pattern with Mahony: when confronted with an accusation of abuse, he refused to contact police and shuffled the offending priest out of California in order to impede any future investigation.

Mahony kept meticulous records of abuse allegations, which he believed documented the extent to which he had gone to curb the abuse problem within the church. In the end, it is those very records that the Times used to demonstrate the lengths to which Mahony had gone to shield alleged abusers in his fold.