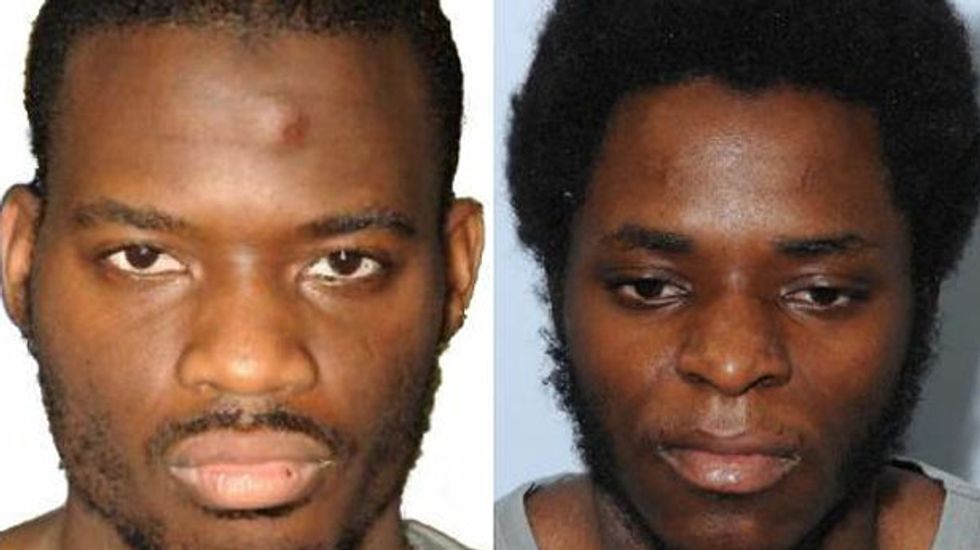 Two Muslim fanatics were found guilty Thursday of murdering a British soldier whom they butchered in broad daylight on a London street.

Lee Rigby was knocked down by a car and then nearly decapitated as Michael Adebolajo, 29, and Michael Adebowale, 22, hacked him to death with a meat cleaver and knives outside his barracks on May 22.

Jurors took just over an hour to reach their verdict. They found the pair not guilty of attempted murder of a police officer.

Adebolajo kissed his copy of the Koran as he was taken down to the cells at the Old Bailey court in London.

The pair may not be sentenced until January.

They considered themselves "soldiers of Islam", the court heard, and believed they were avenging the deaths of Muslims.

Their defence lawyers told the court they had sought martyrdom by challenging armed police in the hope of being killed. Adebolajo was shot as he charged at an armed officer, while Adebowale was shot as he raised a rusty gun that the pair had brought to the scene.

The pair, both from Nigerian Christian families and born and raised in Britain, converted to Islam.

Adebolajo was known to the security services, having been arrested in Kenya in 2010 and deported.

In a rant to passers-by in Woolwich, southeast London, immediately after the attack, his hands covered in Rigby's blood, Adebolajo said: "We swear by the almighty Allah we will never stop fighting you until you leave us alone.

"Brother, you lot are extreme. You are the ones.

"I apologise that women had to witness this today, but in our lands our women have to see the same. You people will never be safe."

A charge of conspiracy to murder a police officer was dropped during the trial.

The soldier's relatives said they were satisfied that justice had been done.

Rigby's wife Rebecca, who repeatedly left the room in tears during the trial, said: "This has been the toughest time of our lives and no one should have to go through what we have been through as a family."

Prosecutors said the murder was one of the most barbaric they had ever experienced.

Sue Hemming, Head of Special Crime and Counter Terrorism at the Crown Prosecution Service, said: "The murder of Fusilier Rigby was brutal and its perpetrators carried out one of the most savage offences ever prosecuted by our counter-terrorism lawyers.

"As a soldier, this young father had dedicated his life to keeping people safe, including from the threat of terrorism.

"That dedication to his country cost him his life and was in stark contrast to the appalling conduct and extremist views of the men who murdered him."