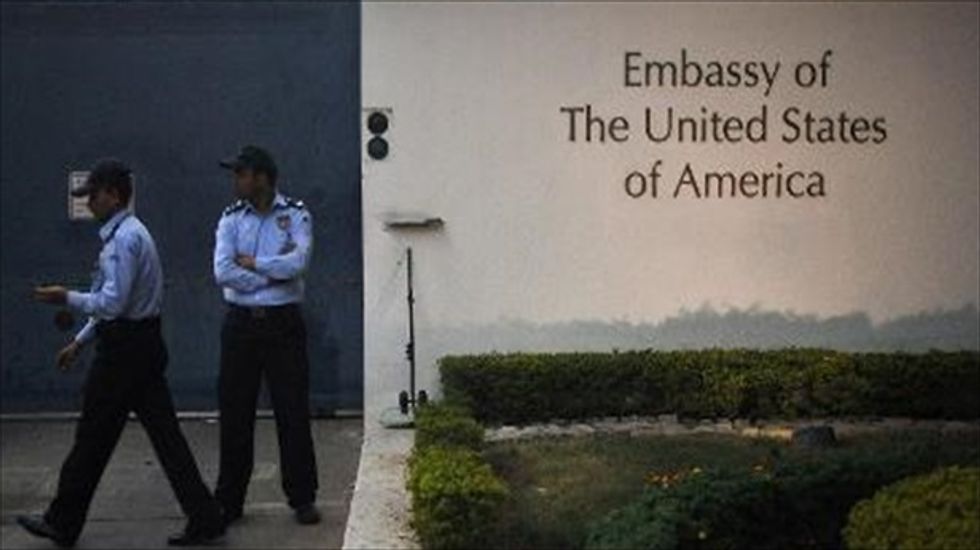 Security personnel outside the US Embassy in New Delhi on Dec. 17, 2013 [AFP]

India asked the United States to withdraw an embassy official on Friday in a fresh retaliatory measure just as a bitter dispute over the arrest of a diplomat in New York appeared to have cooled.

Relations have been in crisis since December 12 when Indian consulate worker Devyani Khobragade was arrested for alleged visa fraud and making false statements relating to the employment of a domestic servant.

She was charged in a New York court on Thursday, but was granted full diplomatic immunity by Washington shortly beforehand, which allowed her to return home where she was expected later on Friday.

The decision to risk escalating the row again by demanding the withdrawal of an American diplomat in New Delhi came as a surprise, just as analysts expected the countries to start the process of rebuilding their battered ties.

The American diplomat was a "similar rank" to Khobragade and is suspected of having helped the family of her maid travel to America where they were granted protection by prosecutors.

"It is understood that this person was involved... in the process," said an official source, who asked not to be named. A second source confirmed the information to AFP.

US prosecutors said that the family of the maid were evacuated from India to the United States because of attempts to intimidate them.

Khobragade's arrest outside her children's school and treatment in custody, where the mother-of-two said she was subjected to a cavity search, outraged India which claimed she benefited from diplomatic immunity.

US prosecutors disputed this because she was a consular employee, and not a ranking embassy official.

They filed charges in a New York and accused Khobragade of sometimes forcing the maid to work 100-hour weeks, even when sick and often without a day off, for pay as little as $1.22 an hour.

The maid herself, Sangeeta Richard, issued a statement thanking rights groups and US officials for support.

"I would like to tell other domestic workers who are suffering as I did –- you have rights and do not let anyone exploit you," she said in a statement released by anti-human trafficking group Safe Horizon.

A fight between allies

India and the United States have embraced each other as strategic partners, but the last few weeks have pummelled what US President Barack Obama's once described as "one of defining partnerships of the 21st century."

India has removed extra security barriers at the US embassy in New Delhi, demanded contract details for domestic staff employed by American diplomats and even stopped the mission importing duty-free alcohol.

On Wednesday, it ordered an embassy leisure centre popular with American expatriates in the capital to stop admitting non-diplomatic members, while scheduled visits by US officials to India have been cancelled.

The United States through presidents George W. Bush and Barack Obama has invested heavily in improving ties with India, which it views as a key ally in its "pivot" to Asia, designed to check Chinese influence.

India has benefited from US backing to gain access to foreign nuclear energy technology and Washington has become an important arms supplier and key market for India's software and IT services exports.

"Both the governments now have the challenge to pick up the pieces and bring the partnership back on the rails," India's former foreign secretary Lalit Mansingh told AFP.

The spat exposed a gulf in perceptions and values between the two countries.

Khobragade, a wealthy 39-year-old from a low-caste background, was seen at home as the victim of heavy-handed policing and her treatment a humiliation of India by the world's superpower.

Employing domestic servants is routine for the middle classes in India where few employees have contracts, many are abused, and none make even a small fraction of the US minimum wage.

"We are proud Indians. We may be a poor country but we don't compromise the sovereignty of the country," Khobragade's defiant father, Uttam, told a press conference on Friday.

But in the United States, there was little public sympathy for Khobragade who was accused of overworking, underpaying and bullying a vulnerable employee.

In New York on Thursday, Preet Bharara, the US attorney for the southern district of the city, informed a judge that a grand jury had filed two counts against Khobragade, of visa fraud and making false statements.

In the indictment, the grand jury said Khobragade had obtained a visa for her maid by promising to pay her $4,500 a month, but then made a second secret contract with a salary of just 30,000 rupees ($573) a month.

This would be double the wages the maid would probably earn in New Delhi, but is substantially lower than the minimum wage in the US.

A statement from the Indian foreign ministry on Thursday read: "At the time of her departure to India, counsellor Khobragade reiterated her innocence of charges filed against her."