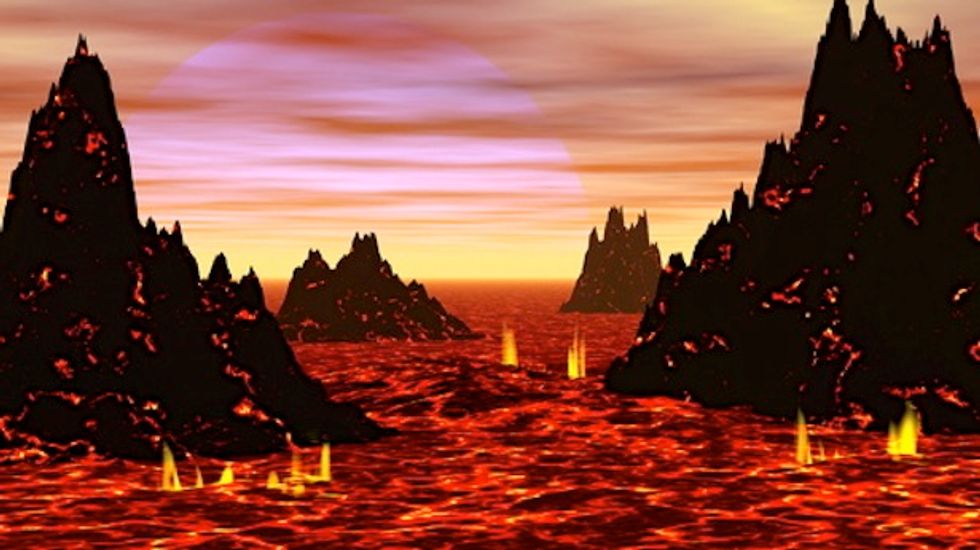 The origin of life is basically inevitable from a mathematical standpoint, according to one physicist, and “should be as unsurprising as rocks rolling downhill.”

Jeremy England, an assistant professor at the Massachusetts Institute of Technology, said he’s developed a mathematical formula to explain his theory that matter necessarily acquires the key attributes for life if placed under certain conditions.

The 31-year-old England theorized that a group of atoms driven by an external energy source, such as the sun, and placed in a heat bath, such as the ocean or atmosphere, will eventually restructure itself to disperse heat – a defining characteristic of life.

“You start with a random clump of atoms, and if you shine light on it for long enough, it should not be so surprising that you get a plant,” England told Quanta Magazine.

Many scientists believe a primordial soup, lightning and extraordinary luck sparked the formation of life and its subsequent evolution, but England says his theory follows the fundamental laws of nature and complements Darwin’s theory of natural selection.

“I am certainly not saying that Darwinian ideas are wrong,” he said. “On the contrary, I am just saying that from the perspective of the physics, you might call Darwinian evolution a special case of a more general phenomenon.”

But if England’s idea can be demonstrated, it would allow biologists to stop seeking a Darwinian explanation for every adaptation and view organisms more generally as energy dissipators.

Although his idea is controversial among other physicists, England’s theoretical results are generally considered to be valid – even if his formula remains unproven.

Researchers are eager to test whether his formula, based on the second law of thermodynamics that helps explain the transfer of heat from a source, might represent the driving force that created life.

“We can show very simply from the formula that the more likely evolutionary outcomes are going to be the ones that absorbed and dissipated more energy from the environment’s external drives on the way to getting there,” England said.

For example, a plant absorbs sunlight energy, uses it to create sugars and disperses infrared light, another form of energy.

Biological reproduction is a logical process for dispersing more and more energy over time, he theorized, adding that the theoretical minimum amount of dissipation that occurs during the replication of RNA molecules and bacterial cells is very close to the actual amount measured during that process.

“A great way of dissipating more is to make more copies of yourself,” England said.

Scientists have already observed self-replication in nonliving systems, such as vortices in turbulent fluids that replicate by drawing energy from surrounding liquid, and England said snowflakes and sand dunes also demonstrate an internal order using condensation and wind.

“He is making me think that the distinction between living and nonliving matter is not sharp,” said Carl Franck, a biological physicist at Cornell University.

[Image: 3D rendering of a sun rising over craggy peaks of a newly formed, volcanic landscape via Shutterstock]