Texas GOP candidates agree: Teach creationism and 'always err on the side of life' 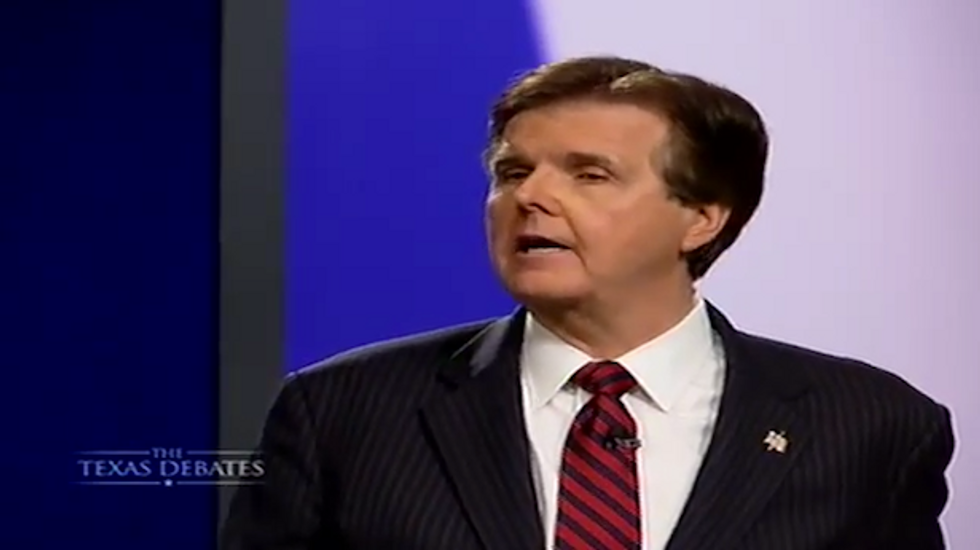 The candidates gathered Monday night for a debate, where they discussed the case of Marlise Munoz, who was 14 weeks pregnant when she declared brain dead in November after suffering a possible blood clot.

Her husband sued the hospital because it would not remove her from life support, which Eric Munoz said his wife had told him she would want, citing Texas law prohibiting the withdrawal of life-sustaining treatment from pregnant women.

The other three candidates – State Senator Dan Patrick, Agriculture Commissioner Todd Staples and incumbent Lt. Gov. David Dewhurst – agreed that a judge had made the wrong decision in allowing Munoz to be removed from life support.

“I think the next legislative session, we’re going to have to go in and clarify what the meaning of the statute is in order to remove the ambiguity,” Staples said.

All four candidates also agreed that creationism and intelligent design should be taught alongside evolution in Texas schools, and Patterson advocated a comparative religion course for students.

“I think kids growing up in Texas ought to learn about other religions as well,” Patterson said. “In part so they feel comfortable with their own (and) in part because they see some of the things that would give them pause.”

Patrick and Dewhurst emphasized that they’re Christians who believe in the Bible-based story of creation.

“When it comes to creationism, not only should it be taught, it should be triumphed (and) it should be heralded,” Patrick said.

Dewhurst said he understood that creationism alone could not be taught in schools, but he thought it should be taught alongside science to allow students to decide for themselves what to believe.

Patterson was the lone holdout in calling for the continued prohibition against medical marijuana, siding with Gov. Rick Perry to argue that states should be allowed to decide the issue, rather than the federal government.

Both Staples and Dewhurst side-stepped a question about permitting abortion in the case of incest or rape, pointing out that they were pro-life without going into specifics, but both Patrick and Patterson said no exceptions should be made in those instances.

“A child of a rape isn’t inferior to another child,” Patterson said. “It’s either a life or it isn’t life.”

Patrick conceded that some exceptions must be made in the case where a mother’s life is placed “truly in danger,” and he advocated helping low-income women who are pregnant.

“You always protect life in every situation,” Patrick said. “Provide money for low-income women. Do whatever it takes to protect life – even raise money from businesses.”

All four candidates agreed that a guest worker program should be implemented for many undocumented workers already living in the U.S. – but not before securing the border.

“We have to do something,” Patterson said. “Would you rather have the border patrol chasing wait staff or coyotes and narco traffickers? We need to focus on criminals.”

Dewhurst suggested that shutting down the border could be accomplished easily.

“We can shut down the border this year simply by the governor and (House) Speaker (Joe Straus) joining in legislature and appropriating funds,” Dewhurst said.

The House speaker faces a challenge from the Republican Party’s right wing, who accuse him of being insufficiently conservative.

“I am flattered that my challengers are all talking about things they want to do that we have been doing in the last several years,” Dewhurst said. “I’m an unashamed conservative, and I don’t compromise my conservative values.”