Pussy Riot mocks Putin on Colbert: 'We don’t want a shirtless man on a horse leading us' 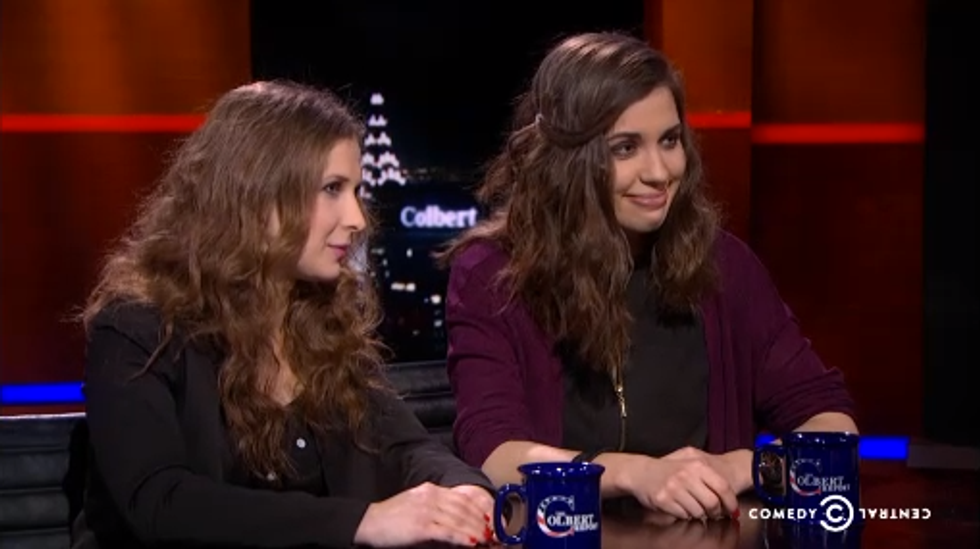 Two members of the Russian punk group Pussy Riot visited The Colbert Report on Tuesday to talk about their arrests and earlier protest actions.

Stephen Colbert welcomed the pair to their first U.S. visit by asking if they’d eaten at an Olive Garden yet, but they told him through an interpreter that they had not.

Colbert asked Nadya Tolokonnikova and Masha Alyokhina about their arrests and imprisonment for performing a protest song at a Russian Orthodox Church, whose leadership had supported Vladimir Putin’s presidential campaign.

“We sang a fun song in a church,” Tolokonnikova said. “Yes, and seemingly we broke [the law] many times before that because we had a lot of fun songs. One of them was called ‘Putin Piss Off.’”

Colbert warned that Putin was a friend of his and said he would edit out anything bad they said about the Russian leader.

“That’s okay, we’re making our own taping right now,” Tolokonnikova said, but Colbert joked they would be searched before leaving the building.

Colbert told the women they seemed nice, but he didn’t understand why they would oppose Putin, who he described as a “strong man” who was “just trying to preserve the peace and bring Russia into a brighter future.”

“We have different ideas about a bright future, and we don’t want a shirtless man on a horse leading us to that,” Tolokonnikova said.

'Disappointed' remnants of People's Convoy living in cars and vans in DC: report