Conservative alternatives -- even atheists -- make their case at CPAC 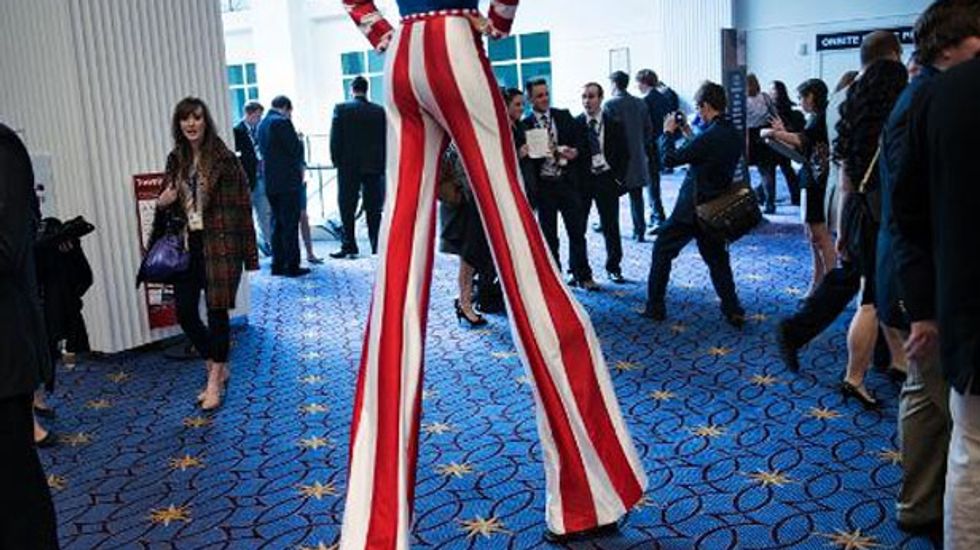 Traditional Republicans, stand aside -- or at least make room under your tent.

Even conservative atheists -- "Pro gun rights, pro small government, just no God involved!" -- handed out pamphlets at this year's event, where many are known to equate Christian values with American values.

The Conservative Political Action Conference, hosted by the American Conservative Union (ACU), is part family reunion with a cast of familiar characters, part political bacchanalia, and part therapy session as the Republican base contends with deep divisions and plots strategy in a mid-term election year.

Luminaries like Senators Ted Cruz and Rand Paul, Governors Bobby Jindal of Louisiana and Chris Christie of New Jersey, and far-right darling Sarah Palin all make their pilgrimage to the closely-watched event.

But beyond the headline-grabbing speeches, or acts that baldly pandered to conservatives such as Senator Mitch McConnell walking on stage brandishing a rifle, a youthful exuberance is coursing through the 10,000 participants clogging a Maryland convention center through Saturday to exchange business cards and plot their next political revolution.

Sure, many of them bashed President Barack Obama, and real estate mogul Donald Trump was on hand to call Democratic leaders "pathetic."

But this is no longer your father's Republican core; a new generation of broad-minded, pragmatic and more socially open conservatives is muscling in on traditional turf.

Take Shannon Smith. The head of Abundant Power Group is a dyed-in-the-wool fiscal conservative who expressed disdain for the government's environmental regulations and doubts about human responsibility for global warming. But he recognizes that the renewable energy industry is here to stay.

"We conservatives need to own the non-carbon energy economy," he said in a session on global warming.

But Jon Crane was peddling something new to CPAC: opposition to the death penalty.

He was extremely nervous about the reception that a cause more associated with liberals might get here.

"We didn't know if we'd be eaten alive, but actually we've been warmly received," Crane told AFP about his group Conservatives Concerned About the Death Penalty.

Supporters latch on to how anti-execution arguments merge with conservative principles: respect for human life, the need to reduce costs, and prevention of government abuse.

"We're convincing people one conservative at a time," Crane said.

Retired cop Howard Wooldridge, who wears a cowboy hat and a shirt with his message advocating marijuana legalization, does little arm-twisting at CPAC.

Republicans traditionally backed tough drug laws for decades, but that appears to be changing.

He frames his argument about the absurdity of the nation's pot laws in strict conservative principles -- personal responsibility and limited government -- and CPAC attendees are almost 100 percent behind him, he said.

This year saw two states, Colorado and Washington, legalized recreational marijuana use, and "I'm a pig in slop," Wooldridge said.

Not all movements got their due. Gay conservative group GOProud tried to squeeze in to the event, after the organization was reportedly prevented from sponsoring CPAC like they did in 2010 and 2011.

A push-back led to their exclusion in 2012 and 2013, and one of GOProud's founders quit the group last month, saying its members were being used as "stooges" by the ACU over this year's compromise that allowed them to attend only as individuals.