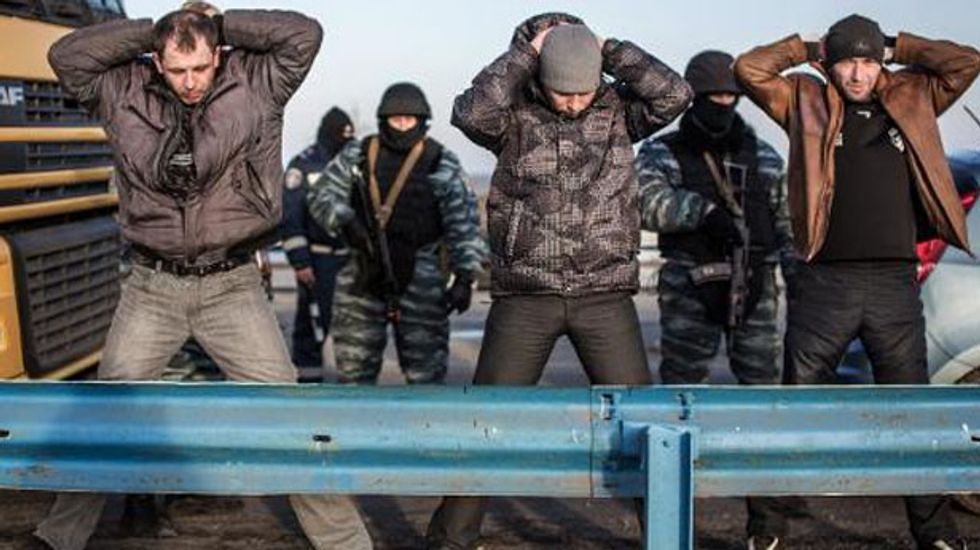 Ukraine's Crimea peninsula voted on Tuesday for full independence from Ukraine ahead of a referendum to join Russia while France threatened sanctions against Moscow as early as this week.

The latest escalation of Europe's worst crisis in decades came moments after ousted pro-Kremlin leader Viktor Yanukovych defiantly vowed to return to Kiev from Russia and declared he was still the leader of the ex-Soviet country.

"I remain not just the sole legitimate president of Ukraine but also commander-in-chief," Yanukovych told reporters in the southern Russian city of Rostov-on-Don.

"As soon as the circumstances allow -- and I am sure there is not long to wait -- I will without doubt return to Kiev," he said in his first public appearance since February 28.

Yanukovych still enjoys Moscow's recognition and remains a political wildcard who the Kremlin says is pushing for Russia's immediate invasion of Ukraine in the most explosive East-West standoff since the Cold War.

Crimea has been a tinderbox since Russian forces seized control of the Black Sea peninsula -- home to its Black Sea Fleet since the 18th century -- with help of Kremlin-backed militias days after Yanukovych fled Ukraine last month in response to three months of deadly unrest.

The strategic region's self-declared rulers are recruiting volunteers to fight Ukrainian soldiers while Russia's parliament on Tuesday prepared legislation that would simplify the Kremlin's annexation of Crimea after Sunday's vote.

But the pro-European leaders in Kiev have rejected the referendum and are appealing to Western powers for both diplomatic backing and pressure on Moscow to release its troops' stranglehold on the rugged peninsula of two million people.

The North Atlantic Treaty Organization (NATO) responded to the threat of all-out war on Europe's eastern edge by announcing the planned deployment of AWAC reconnaissance planes in member countries Poland and Romania to monitor any Russian movements.

And French Foreign Minister Laurent Fabius warned that sanctions against Russia could come as early as this week if Moscow failed to respond to Western proposals on the standoff.

Western officials are also expected to meet in London on Tuesday to finalise a list of Russian officials who may face asset freezes and travel restriction over their role in endangering the sovereignty of Europe's largest state.

The deep historic divide in the nation of 46 million between its pro-European west and more Russified southeast became ever more apparent as Ukraine's political crisis unfolded following Yanukovych's rejection in November of an historic EU pact.

Last month's rise to power in Kiev of leaders with cultural and political links to Europe prompted President Vladimir Putin seek the right to use force against Ukraine in defence of the country's Russian speakers.

But the first region to take the radical step of breaking away from Ukraine was Crimea -- a peninsula that had always enjoyed wide autonomy and was a part of Russia until being handed over as a symbolic "gift" to Kiev in 1954 when its was still a part of the Soviet empire.

The body had earlier voted to actually join Russia and the latest move appeared to be primarily aimed at creating a legal framework for becoming a part of Russia as a sovereign state.

A parliamentary statement said independence would come into force after the referendum if the result was in favour of Crimea becoming part of the Russian Federation.

The statement referred to Kosovo's US-backed separation from Serbia and said "the unilateral declaration of independence of part of a state does not violate any international laws".

The threat of Ukraine's imminent breakup has made the tensions and mistrust that always seem to shadow Russia's relations with the United States ever more explicit and potentially damaging for long-term ties between the two powers.

The rifts were exposed yet again on Monday when Russian state television took the unusual step of airing details of a meeting between Putin and Sergei Lavrov in which the foreign minister complained that US Secretary of State John Kerry had rejected an invitation to visit Moscow.

The broadcast of the exchange appeared clearly aimed at putting the pressure back on Washington and painting US officials as unwilling to discuss their support for a Kiev interim team that Putin says claimed power through "an illegitimate coup".

The US State Department did not directly confirm Kerry had rejected a visit to Russia that could have included talks with Putin.

But it noted that the two sides had little to discuss until Moscow showed a willingness to negotiate with the new Ukrainian leadership and was prepared to call its Crimean forces back to their barracks.

"When Secretary Kerry spoke with Foreign Minister Lavrov this weekend, he made clear that he would welcome further discussions focused on how to de-escalate the crisis in Ukraine if and when we see concrete evidence that Russia is prepared to engage on these proposals," US State Department spokeswoman Jen Psaki said.

The latest bitter and unusually public row between came a day before Ukrainian Prime Minister Arseniy Yatsenyuk heads to the White House for a Wednesday meeting with US President Barack Obama that should add credibility to his untested team.

Yatsenyuk will also use the chance to iron out the details of a $35 billion aid package he says his nation's teetering economy needs to stay afloat over the coming two years after being mismanaged by Yanukovych and his allies, who have been accused of bilking it of billions of dollars.