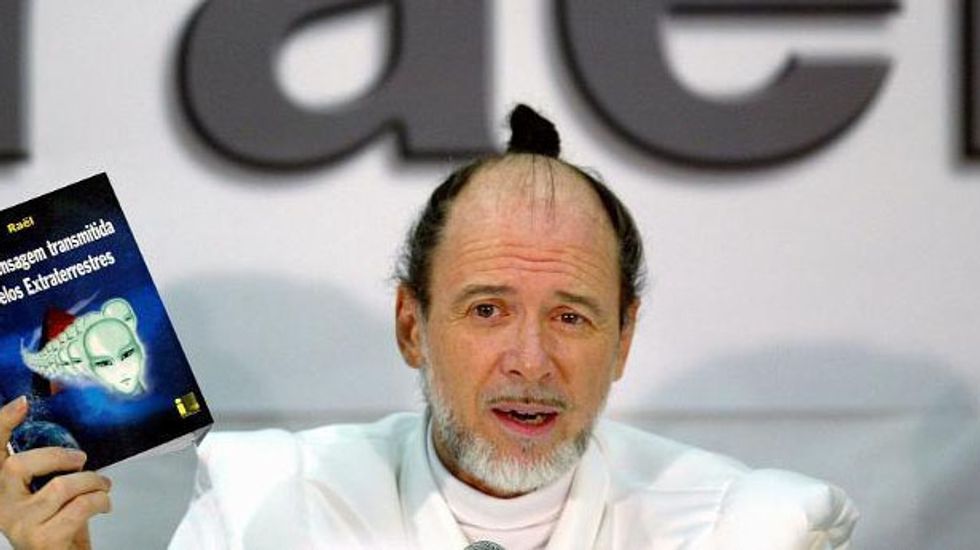 On a blisteringly hot afternoon this month, an unusual gathering took place in the city of Bobo-Dioulasso in the west African country of Burkina Faso. Shaded by red and green striped canopies, a couple of hundred people stood in reverential silence around a laptop. On screen, a man with a carefully clipped beard, dressed head-to-toe in white, addressed the crowd via Skype from Japan.

The speaker was a spiritual leader known as Rael, the founder of one of the world's largest UFO sects, and he was online to announce the arrival of the first clitoral repair hospital in Africa.

Rael preaches that humans were created by extraterrestrials to enjoy untrammelled sexual pleasure – a belief that has led the group to campaign against female genital mutilation (FGM), and to advocate surgery to improve sexual feeling to FGM victims.

"The idea of the hospital came from Rael," said Nadine Gary, a spokeswoman for Clitoraid, the Raelian-backed NGO behind the clinic. "Rael realised a lot of campaigning work is being done to prevent circumcision, but nothing is being done for the women who have already been circumcised."

Each year about 3 million girls – mostly in rural Africa and Asia, are forced to have part of their genitalia sliced off. But while clitoral reconstruction surgery is becoming more common in the west, it remains contested. The procedure restores normal appearances to women who have been mutilated – which can be an important step in restoring self-image – but some doctors argue that it risks causing further damage.

Several hundred women have approached Clitoraid to undergo the free surgery in Bobo-Dioulasso. Among the first was Marcelina, 33, who had been mutilated at the age of 13 by a traditional "cutter", using a blunt blade and no anaesthetic. "I'm really happy about this hospital. FGM is just a way to oppress women. We have a right to enjoy full sexual pleasure," she said after the operation.

But Clitoraid's attempt to launch its clinic in Burkina Faso has had a wary response from local officials and furious opposition from mainstream religious leaders in the country. Critics warn of a long history of doomed humanitarian interventions in Africa that failed to take account of local culture.

So how did an American UFO cult end up spending almost a decade attempting to build a clinic in a landlocked west African nation few outsiders can locate on a map? It is a tale that has seen an unlikely alliance between a California-based fringe group and the growing number of African women increasingly speaking out against a painful tradition.

Rael – once known as Claude Vorilhon, a French-born amateur sports racer and journalist – changed his name in 1973 after what he says was an encounter with extraterrestrials who declared that he had been chosen as their emissary to deliver a message of joy to humankind. Since then the sect has made an ideology of sexual satisfaction, with annual "happiness parties" in which members wear wristbands to denote their willingness to have sex.

The movement made its first step into the medical world with a venture called Clonaid, which gained notoriety in 2002 when its chief executive claimed it had successfully cloned a human baby. Then at some point in the mid-2000s, Rael set his sights on Africa.

The leap from proselytising cult to pioneering anti-FGM organisation took place in Burkina Faso, one of the few countries in Africa where the most extreme form of FGM was traditionally carried out. As well as slicing off the clitoris, the vagina was sewn up, leaving just a small hole to allow urination. The opening was enlarged after marriage.

In 1996, the sprawling desert country launched one of Africa's most successful campaigns to end the devastating practice. Years of dogged work by teams of community health workers helped to change attitudes at ground level, and by 2011 the UN found that fewer than a fifth of under-10s had been cut, compared with 80% of those between 20 and 49.

In this environment, Clitoraid began building its hospital in Burkina Faso's second city of Bobo-Dioulasso eight years ago.

Abibata Sanon, the group's local co-ordinator – who had previously undergone reconstructive surgery at a private clinic in Ouagadougou – claimed dozens of women approached her about surgery. "Even men were calling to make inquiries on behalf of their wives. I always tell them I've [had the operation] – it changed my life," she said.

But it has been a rocky journey. Clitoraid was forced to rename the hospital after local people complained that its original name – "the House of Pleasure" – was inappropriate. Dishing out free sex toys in the conservative society backfired, and many bristled at the group's fundraising efforts in the west, from collecting donations at adult entertainment venues, to a short-lived campaign called "Adopt a Clitoris".

Clitoraid's spokeswoman dismisses such criticism. "No other religion dares touch the issue of women's sexuality," said Gary. "We're not asking these women what their religion is – this is a humanitarian mission. All they want is their clitoris back."

Yet some doctors say there's no evidence that this is possible. Critics argue it is like to trying to build a hand from an amputated wrist – and more research needs to be done before the technique becomes widespread.

In June 2012, a team led by the French urologist and surgeon Pierre Foldès published an article in the Lancet [PDF], in which he described a technique whereby clitoral sensation could be restored in an operation that takes less than an hour.

Foldès profiled 866 of the 2,938 patients he had operated on. A year later, 821 reported a decrease in pain and 430 experienced their first orgasms. Many turned up after seeing the effects on their own family members. While admitting surgery was only the initial step to recovery for mutilated women, Foldès nevertheless declared his technique a success.

But his conclusions are not universally accepted. Some doctors say there is insufficient evidence – Foldès' results were based on a small sample, tested with a self-devised scale of pleasure and pain. Critics argue that more research needs to be done before the technique becomes widespread.

A team of experts from University College hospital in London led by Professor Sarah Creighton published a response in the Lancet. "The campaign against FGM could be undermined by a false proposition that the ill effects can be reversed. Formation of a 'neoglans' cannot restore the lost or damaged innervation," the letter said.

"We're not saying don't think about ways to help women who have already suffered terrible harm, but be honest about what you're doing: [clitoral reconstruction] is cosmetic surgery," said one doctor – who admitted that the procedure could still help some women by bolstering their self-image.

Ram Zongo, a 42-year-old businesswoman from Ivory Coast, said she underwent the procedure in Burkina Faso's capital, Ouagadougou, because fashions were changing, and African men no longer wanted women who had been "excised".

"So far there hasn't been any difference, but the doctors warned it's not every case where sensation is restored," she said.

Further wrangling over a licence meant that the hospital has still not officially opened, but Clitoraid says it has successfully operated on dozens of women in another local clinic.

Among those cheering when Rael gave his speech were members of Burkina Faso's small but flourishing Raelian community. Souba, a chatty, unemployed man who had bought his wife with him, said he saw no reason why Raelianism couldn't be accommodated alongside Sufi Islam or Catholicism, the two religions that dominate Burkina Faso. "Whether it's by the grace of God, or the grace of Rael, it doesn't matter. This is a continent that needs as many hospitals as possible," he said.

But local officials are concerned that vulnerable women could be pressured into joining the Raelians. "The operations they want to perform are a good thing. But it isn't right to use medical issues as a cover to convert vulnerable people," René Segbo, the country's health ministry spokesperson, said.

He said that the group had failed to complete the appropriate paperwork and that doubts remained over their outpatient care. "As far as I'm concerned, they shouldn't be operating," he said.

Additional reporting by Katie Mark and Julia Mills in Bobo-Dioulassou