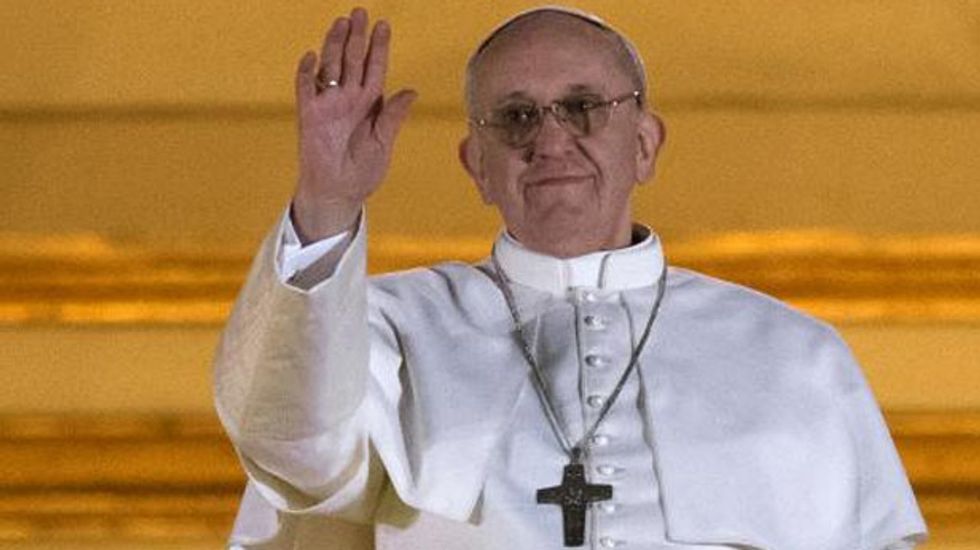 Pope Francis celebrates one year in office on Thursday swaddled in a blanket of approval world leaders would die for and most of his predecessors could only dream of.

But he also knows that there is more to being pontiff than good PR. Bigger challenges lie ahead as Francis seeks to engineer a renaissance of his Church after years of scandals caused by paedophile priests and corruption and intrigue within the Vatican bureaucracy.

Spreading the word of God via Twitter, posing for selfies, paying his own hotel bills and washing the feet of young offenders: all have proved to be inspired moves for the erstwhile Jorge Mario Bergoglio.

Humble, modest, approachable and modern. After 12 months, the @Pontifex brand is thriving.

The 77-year-old is not only lovable, he's also cool. Sufficiently so for his first year to have been marked by appearances on the covers of an unlikely trio of US magazines.

He was Time's person of the year for 2013. Esquire declared him their best-dressed man and Rolling Stone just decided: "He rocks."

Church attendances are said to be rising across the world and pilgrims are flocking to Rome in unprecedented numbers.

A UN report accusing the Catholic Church of having covered up for tens of thousands of child-abusing priests failed to dent the impression that Francis is serious about reshaping the Church in his own open and forgiving image.

Questions raised at the time of his appointment over whether he might have done more to oppose the 1970s military junta in his native Argentina also seem to have melted away.

Overall, things could hardly be rosier.

- Reaching out to believers -

Or could they? Within the walls of Vatican City, Francis's popularity is not universally acclaimed as a positive sign amongst traditionalists suspicious of the new pope's desire to reach out to believers who have abandoned regular interaction with the Church.

That has involved striking a more compassionate, understanding tone on the vexed issues of the Church's attitudes to homosexuality and its treatment of divorced people.

Francis made waves early in his papacy by telling journalists, "If someone is gay and seeks the Lord with good will, who am I to judge?"

More than any other, that remark helped secure the Time man of the year accolade. But Vatican insiders insist it would be wrong to infer from it that Francis is bent on breaking with established doctrine on this or any other issue.

Instead, his approach consists of finding practical ways to enable the Church to overcome the many chasms that have opened up between what it officially teaches, on an issue such as contraception for example, and what, in practice, most of its followers believe.

That will be the focus for a major synod on the family which Francis has called for later this year and which some observers have billed as potentially defining his papacy.

The synod has been preceded by an unprecedented process of consultation of ordinary Catholics around the world.

Traditionalists have seen this as potentially opening the door to an "a la carte" version of Catholicism in which the faithful are allowed to buy into or opt out of parts of official doctrine, as long as they keep turning up for mass.

Not true, says one of the pope's closest counsellors, the German Cardinal Walter Kasper.

Kasper, 81, was the oldest member of the Conclave that elected Francis a year ago but he is firmly on the modernising side of debates raging in the Holy See.

Seeking new solutions to issues that have become a barrier between the Church and its followers, does not amount to an attack on doctrine, Kasper said this week in an interview with Italian daily La Repubblica.

"Rather it is about a realistic adaption of doctrine to the current situation.

"The Church must never judge as if it had a guillotine at the ready, rather it must always leave the door of mercy open, a way out that allows everyone a new start."

The issue has split the cardinals. Marriage, for all of them, remains an indissoluble sacrament, but many are acutely aware that those whose marriages have failed cannot be excluded from a Church that wants to prosper.

"When love fails, as often it does fail, we must feel the pain of this failure and accompany those who have known it. Do not condemn," Francis himself said at the end of last month.

Kasper acknowledged that some cardinals were opposed to the debate taking place at all, and there are those who fear Francis's honeymoon period could be headed for an acrimonious end.

"There have been open exchanges, but I am not afraid of that," Francis confided to another Italian daily, Corriere della Sera, last month.

The approach to divorced believers is similar to that envisaged on the gay issue.

Talking to NBC in the United States this weekend, Timothy Dolan, the conservative cardinal of New York, revealed that Francis wanted to understand, why so many countries had legalised same-sex unions.

But he was also at pains to stress that Francis had never expressed any kind of approval of them.

One year in, it is evolution not revolution that is on the menu in Rome.