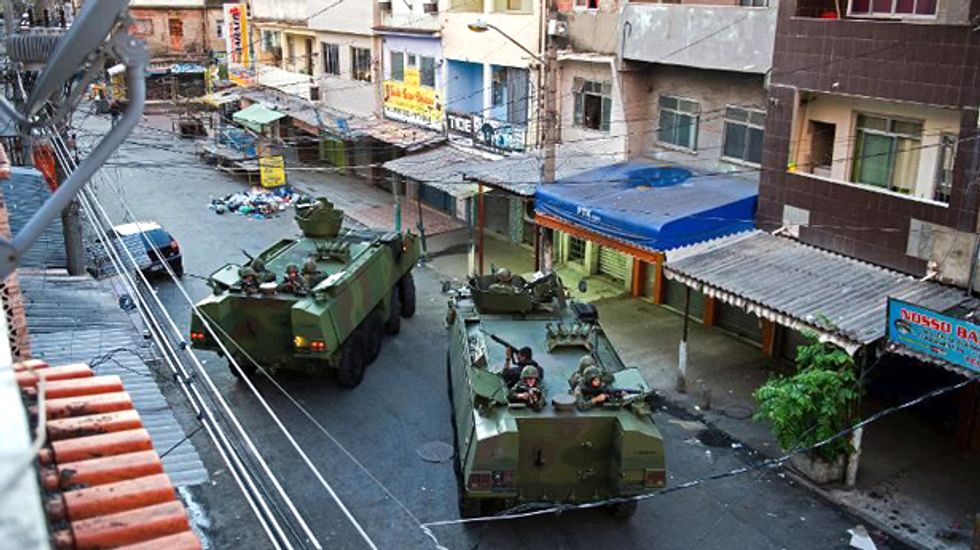 More than 1,000 Brazilian police backed by helicopters and naval armored vehicles took over a favela near Rio de Janeiro's international airport Sunday, less than three months before the World Cup.

The swiftly conducted dawn operation was the latest attempt to drive drug gangs out of the notorious Mare shanty town, a haven for organized crime and one of the city's most dangerous places.

The Mare complex, home to 130,000 people, is a potential through route for tens of thousands of football fans flying in and out of the metropolis, which will stage seven World Cup matches -- including the July 13 final.

Members of the feared Special Police Operations Battalion swarmed through the favela in 15 minutes without facing resistance, while helicopters buzzed overhead.

Police had their weapons trained on the rooftops but apart from a few bars close to the entrance of Mare, the labyrinth of narrow streets was empty and dark.

At sunrise, police raised a Brazilian flag in the main plaza and soon thereafter were giving horseback rides to local supporters.

The operation appeared partly orchestrated for the media since police had already taken over some of the favela last week, making 57 arrests and confiscating drugs and weapons.

Authorities have recently stepped up efforts to quell violence in Rio as the World Cup looms but denied the Mare operation was directly linked to the upcoming football extravaganza.

A huge slum "pacification" program has been in place since 2008 aimed at making the city -- which will also host the 2016 Olympics -- safer.

In recent years, Police Pacification Units (UPPs) have been installed in 174 Rio favelas, home to around 600,000 people.

Rio's security secretariat said 1,180 officers were involved in the operation, backed by at least 14 armored vehicles and four helicopters.

Intelligence services say drug traffickers who left Mare after last week's announcement of the planned occupation could come back later, meaning authorities face a long-term battle to keep the volatile area under control.

As the sun rose, shops slowly began to open but many residents were irritated by the presence of security forces and journalists. Few wanted to speak with reporters.

"Me, I think it's fine, the state must be present everywhere in Rio," a trucker who only gave his first name Jorge told AFP.

"Now it will depend on the police who move here because there are those among them who commit abuses."

After decades battling organized crime in the poor communities surrounding the city, authorities had hoped the favela "pacification" program would bring down crime.

But renewed violence this year has claimed the lives of eight police officers -- four of them in "pacified" districts.

Keeping a lid on crime has become key to Rio's bid to turn the city into an international showcase for the World Cup and South America's first Olympics.

The occupation of Mare is similar to that carried out in 2010 in the Alemao network of favelas, home to about 300,000 people.

Alemao was occupied one week after 35 people were killed in bloody clashes between police and drug dealers.

Rio's state secretary for security affairs, Jose Mariano Beltrame, said Mare had to be taken because of its strategic location between the airport and the city.

"This is not for the World Cup or the Olympic Games," he said. "The World Cup will be over in a month, and Mare will stay."

The operation "is not to enter the homes of every resident but rather specific places of people wanted by the law."