Erin Gloria Ryan writes about the latest bit of information to come out of the murder trial of Oscar Pistorius. Pistorius is accused of deliberately murdering his girlfriend, Reeva Steenkamp, during a late night argument on Valentine's Day. He claims that he would never hurt her and that it was an accident and that he thought she was an intruder. She was locked inside a bathroom when he unloaded a gun into it. I am skeptical of Pistorius's excuse for a number of reasons, the first being that I find it wholly implausible that someone who shares a bed with someone else would get up in the middle of the night and just assume that the person in the bathroom is an intruder and not their partner. You know, the one who isn't in the shared bed? You could just ask, if nothing else. Or double check the bed. 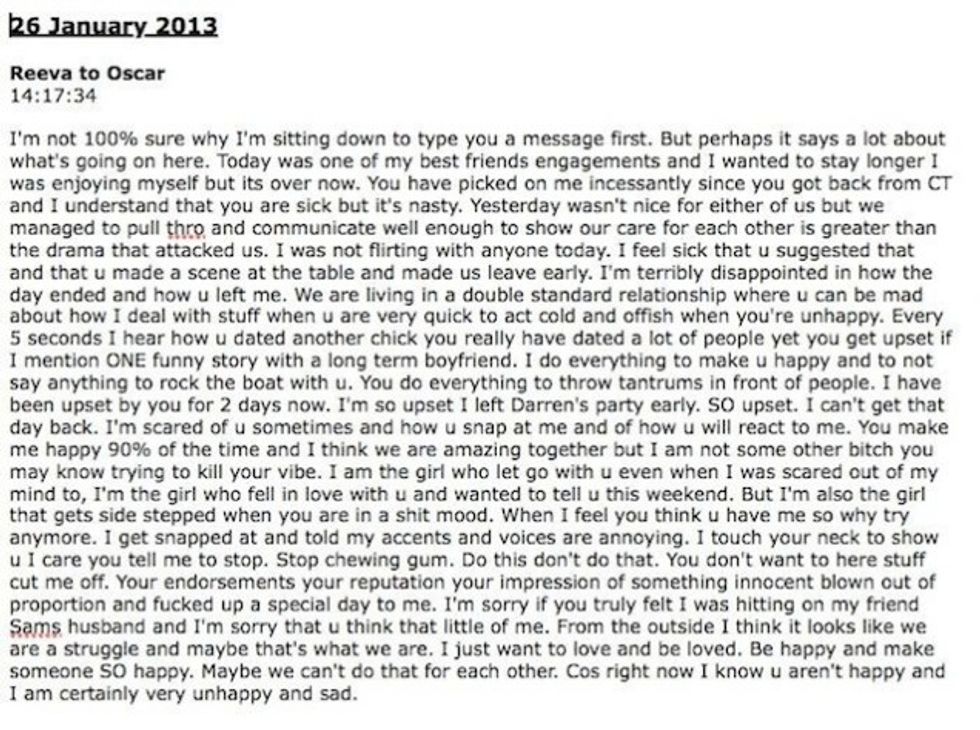 I think this is useful for really understanding what is going on in abusive relationships. The abuser is trying to create this situation where his target is always on edge, always walking around on eggshells. The power rush from having someone so afraid of you and feeling like you control them and watching them dance around, trying to placate you while knowing that you can never be placated? That matters more to the abuser than the feelings of this person they supposedly love.

I think it's also important to understand that abuse victims are not passive receptacles, but that they do fight for themselves, often in the way that Steenkamp is doing here, by pleading your case and trying to persuade the abuser to see reason. And her arguments are entirely reasonable. Anyone who has had to tip-toe around a toxic personality probably relates strongly to all these arguments.

Why try to reason with an abuser? Well, there's immense amounts of pressure on people, particularly women, to try to make relationships work and to view themselves as a failure if they decide to throw in the towel. I'm not saying you should bolt from a relationship every time you have a quarrel with someone, of course. No relationship is perfect. However, there's endless discourse about how relationships are "hard work" and a lot of social messages about how you have a moral obligation to stick by someone who makes you unhappy and try to work it out. Plus, abusers rarely start out horrible right off the bat. They slowly escalate the amount of snitting and cruelty, so that you don't even realize that you're starting to drown in it. Nearly all people say mean or critical things to their loved ones, so it's hard to find the break point where their cutting remarks stop being a forgivable amount of screwing up and start qualifying as abuse. Victims often stew in the hope that if they improve communication skills, things will get better. Steenkamp's letter is a classic example of this.

The problem, of course, is abusers don't want to be reasoned with. They have zero intention of trying to improve communications or make life better for the both of you. Walking on eggshells is what they want of their victim. They get off on feeling powerful, so they make up a bunch of arbitrary rules so they can punish you for breaking them (and forget it if you didn't know that it was a "rule"---now you're breaking the "you should have known" rule and they get to call you stupid) and they want you to walk around, afraid to piss them off. Abuse is best understood as a tyranny situation in that way. Your flinches mean more to them than your kisses ever could.

I suppose this is a plea for some understanding of why people stay with abusers, even in situations where they aren't financially dependent or afraid of their own safety if they leave. Victims are working from the assumption that their abusers mean well and aren't trying to hurt them. Abusers, meanwhile, are happy to exploit that assumption while getting a power rush from seeing how well they control and dominate their victims. Steenkamp's words---"I just want to love and be loved"---are heartbreaking. That's usually what is going on with someone who is being manipulated by an abuser. They just don't know that the person they want to love them has another agenda entirely.