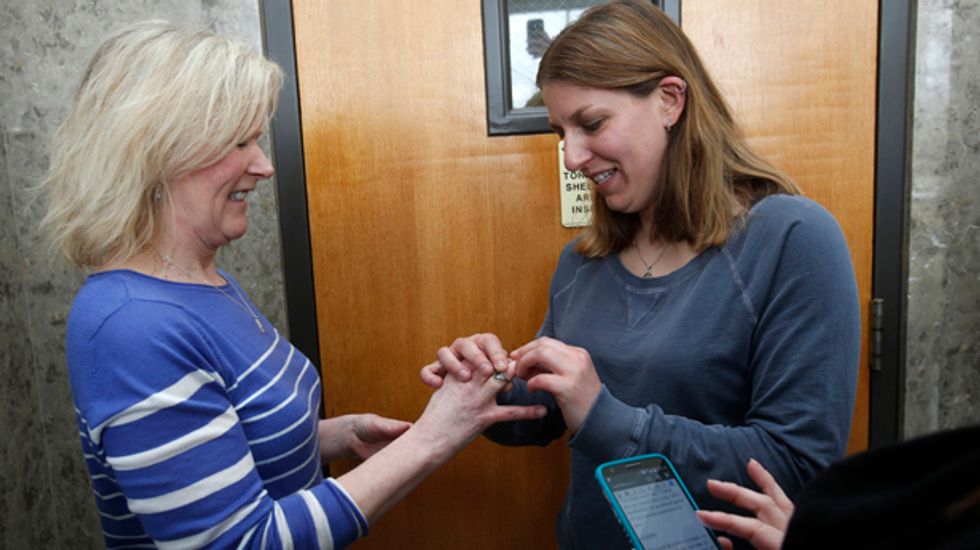 Two women exchange rings during their wedding ceremony in the hallway of the Oakland County Courthouse as the woman officiating the wedding reads the marriage vows from her cell phone, after a Michigan federal judge ruled a ban on same-sex marriage violates the U.S. Constitution and must be overturned in Pontiac, Michigan March 22, 2014. REUTERS/Rebecca Cook (UNITED STATES - Tags: POLITICS RELIGION SOCIETY)

PONTIAC, Michigan (Reuters) - A U.S. appeals court on Saturday placed a temporary hold on a federal judge's ruling that struck down Michigan's ban on gay marriage, a move that followed hastily arranged and joyful wedding ceremonies in the state.

The decision by the U.S. Court of Appeals for the Sixth Circuit came one day after the lower court's ruling, which briefly made Michigan the 18th state in the nation to allow same-sex marriage.

With a temporary stay granted, same-sex couples married on Saturday could find themselves in legal limbo.

The federal appeals court issued a temporary stay in the case until Wednesday, and directed attorneys for the same-sex couple that sued in the case to respond to the state attorney general's request to place the lower court's ruling on hold pending an appeal.

"To allow a more reasoned consideration of the motion to stay, it is ordered that the district court's judgment is temporarily stayed until Wednesday," the ruling said.

The Detroit News reported that in total four counties issued 323 marriage licenses on Saturday before most clerks closed for the day at 1 p.m. local time.

At least 50 people had lined up in the Oakland County clerk's office in Pontiac, on the outskirts of the Detroit metropolitan area, when Clerk Lisa Brown arrived to open it at 8 a.m. local time carrying a heart-shaped balloon.

Brown's staff was among workers in several counties who handed out paperwork to couples undeterred by the Michigan attorney general's immediate appeal of the judge's decision.

"We're going to celebrate with a nice quiet lunch and then go pick out our wedding rings," Colasonti said following the ceremony, which took place 26 years after they met at a church.

Moments later, a lesbian couple emerged from the ceremony room, filling the corridor with elated shouts. As more couples arrived, Brown moved the proceedings to an auditorium for a mass wedding ceremony of a dozen couples or more.

Clerks in at least three other counties - Washtenaw, Ingham and Muskegon - opened outside normal business hours on Saturday to issue marriage licenses.

Michigan's ban on same-sex marriages became law in 2004 as a state constitutional amendment. It was challenged by a lesbian couple from the Detroit suburb of Hazel Park after the law prevented them from jointly adopting each other's children.

Bill Schuette, the state's attorney general, asked the U.S. Court of Appeals for the Sixth Circuit for an emergency order to stay the decision.

The appeals court initially said on Saturday afternoon the plaintiffs' lawyers had until midday Tuesday to file a response, before later issuing the temporary stay.

Brown, the Oakland County clerk, said the appeal was "a waste of taxpayer dollars."

"I'm no longer forced to discriminate in my office," she said. "Couples who have been waiting years to receive equal protection now have it."

Following the temporary hold in the case from the U.S. appeals court, gay rights group Equality Michigan in a blog post urged members to "this pause in marriage equality" to engage in activism, including signing a petition asking the Michigan governor and attorney general to end the state's appeal.

Michigan same-sex couples find themselves in a similar situation to counterparts in at least two other states where lower courts have ruled to extend marriage rights to them.

In December, a federal district judge in Utah overturned that state's ban on same-sex weddings and Utah's attorney general appealed.

Some 1,300 gay couples were married in Utah in the few weeks before the U.S. Supreme Court granted a stay while the appeal is considered, leaving the newlyweds uncertain about whether they have the rights generally afforded by marriage.

April DeBoer and Jayne Rowse, the couple who successfully challenged the Michigan ban, said on Friday they would not marry until the legal uncertainty in their state was resolved.

Seventeen states plus the District of Columbia now allow same-sex nuptials, a number that would be substantially increased if a series of recent court decisions in other states are upheld.

Supporters of the ban in Michigan, Utah and elsewhere have cited tradition, religious texts and the welfare of children to defend their belief that only opposite-sex marriage should be legal, arguments that several courts have ruled not sufficient.