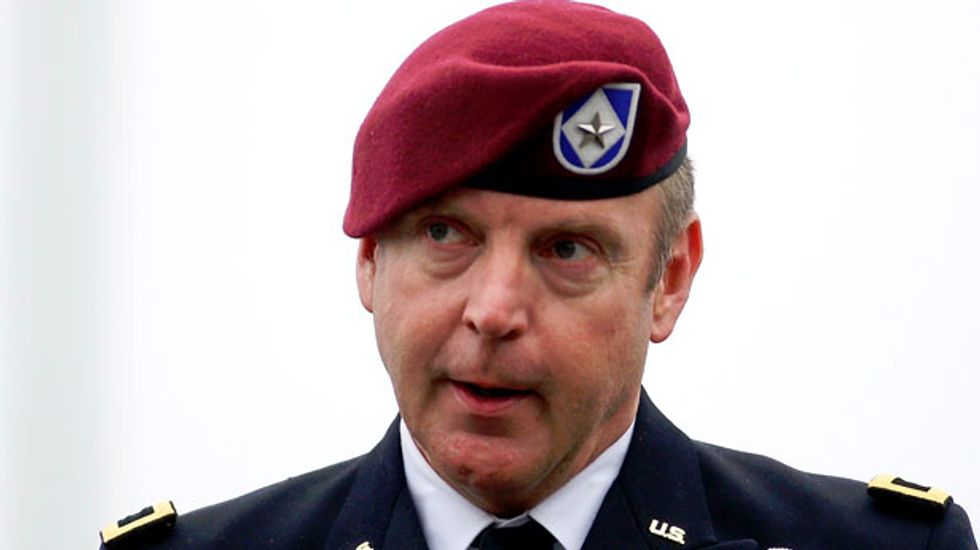 FORT BRAGG, North Carolina (Reuters) - A military judge could decide the punishment on Wednesday for a U.S. Army general who pleaded guilty to mistreating a junior female officer during one of several improper relationships but was cleared in a plea deal of sexual assault charges.

Brigadier General Jeffrey Sinclair's admissions of wrongdoing could bring jail time, though his agreement with the government put an undisclosed cap on penalties in a case that focused attention on how the U.S. military handles sexual misconduct in its ranks.

Male and female soldiers called as defense witnesses during Sinclair's sentencing hearing at Fort Bragg, North Carolina, described the 27-year Army veteran as an inspirational, fearless leader whom they admired despite his acknowledgment of an adulterous affair with a female captain.

"He was easily the best brigade commander I worked for, selfless, more concerned about what his troops are doing than what his bosses think," said Colonel Kenneth Kelley, who served with Sinclair in Germany and Iraq and traveled from Japan to testify on his behalf.

Sinclair, 51, grew emotional and blew his nose as a longtime family friend who was a fellow Army Ranger spoke of the general's remorse.

"I believe that General Sinclair is a man after God's own heart," said retired Colonel James Townsend. "I believe he can be rehabilitated."

Sinclair is expected to read a statement to the court on Wednesday afternoon.

The general's defense team then will argue against him going to prison for his military crimes, which include asking junior female officers for nude photos, possessing pornography on his laptop while deployed in Afghanistan, misusing his government credit card to visit his mistress and referring to female officers with derogatory language.

Though his main accuser stands by her allegations that he forced her to perform oral sex when she tried to break off their illicit relationship, Sinclair was absolved of sexual assault charges through a plea bargain accepted by the judge this week.

"For General Sinclair to serve a day in jail would be a travesty," lead defense attorney Richard Scheff said before court on Wednesday.

Prosecutors sought to show through their witnesses that the general was prone to anger and that his actions harmed female junior officers and brought disrepute to the Army.

The rare court-martial against a general came to halt and resulted in the plea deal after the trial judge, Colonel James Pohl, ruled politics appeared to have improperly influenced the Army's decision to reject an earlier offer by Sinclair to plead guilty if the charges of coercive sex acts were dropped.