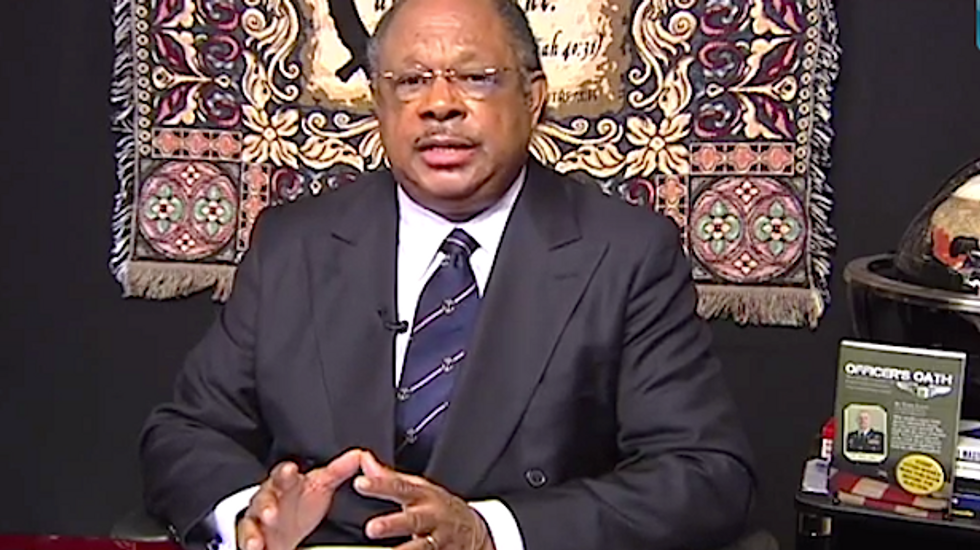 As Republicans denounce and disavow rancher Cliven Bundy, whose conservative folk hero status was derailed when he suggested that black people might have been better off in slavery, the scofflaw rancher has at least one big fan remaining.

“Cliven Bundy is no racist; he is a man of compassion,” Manning said. “Only a person with compassion would ask the question: Are you doing better now sitting on the sidewalks in a government-subsidized house of Las Vegas, or would you rather be back in South Carolina with a garden, where you can go out and eat fresh tomatoes right out of the field, you can go and eat your vegetables right out of the field, grow your own cucumbers and have your own chickens and your own hogs -- and are you better off now?”

While it’s debatable whether poor people are better off living in government-subsidized urban housing or owning a small farm in a rural setting, Manning spoke for nearly nine minutes without uttering the most relevant word in the Bundy controversy: slavery.

“He has no hatred for black people, he’s just wondering would they be better off under the circumstances that preceded the present mindset of civil rights, the African-American identity and other things,” Manning said.

The rancher, who has repeatedly cited his own freedom as an American citizen as justification for disregarding federal laws and regulations of his agricultural business, made several observations about black people that have been widely condemned.

“They abort their young children, they put their young men in jail, because they never learned how to pick cotton, and I’ve often wondered, are they better off as slaves, picking cotton and having a family life and doing things, or are they better off under government subsidy?” Bundy mused earlier this week. “They didn’t get no more freedom. They got less freedom.”

Manning spoke at length in the video about his own childhood, picking cotton in North Carolina.

“It was the work ethic I developed in the cotton field, it was the respect for humanity, it was the fact that I had a father and a mother in the home and we went to church all as a family, and we eschewed evil and we loved God, that they were able to determine at Bankers Trust and Procter and Gamble and other places I worked that I had the kind of ethics and the morality and the ability to do those companies well,” Manning said.

The chief pastor at ATLAH World Missionary Church was born in 1947, more than 80 years after slavery was outlawed by the Thirteenth Amendment, which afforded him the freedom to leave his family farm by choice and travel to New York for paid work opportunities.

“What I’ve noticed is that young people are unable to get employed today because they don’t have the morality, and yes, picking cotton and hard work has never hurt anybody,” said Manning, neglecting to mention the brutal treatment slaves endured if they did not work hard enough.

He said hard work builds character, and he blamed liberals for the lack of work ethic he observes in America’s poor people.

“We’ve got to stop these damn liberals from running to the aide to the person who’s on government subsidies and telling them that they need more subsidies using their New York Times and their Washington Post and their ABC News and the MSNBCs and all those other things, national – NAACP – destroying the fiber and character of black men and women, and now they’re in such a state of delusion that they’re unemployable, they don’t have the right kinds of ethics, they’re raised on a generation of government subsidies,” he continued.

Manning admitted he once fell under the influence of civil rights leaders such as Adam Clayton Powell, Malcolm X, and Stokely Carmichael – which he described as a trap that has ensnared millions of black people today.

“I’ve got context, so don’t anybody anywhere any time try to refute or try to in any way marginalize or racialize what I’m saying by calling me a racist and a hater,” Manning said, anticipating his critics. “I’ve got context, I’ve lived the life, I know it firsthand, and Cliven Bundy is absolutely right, and he hit a grand slam home run (Thursday) in that interview.”