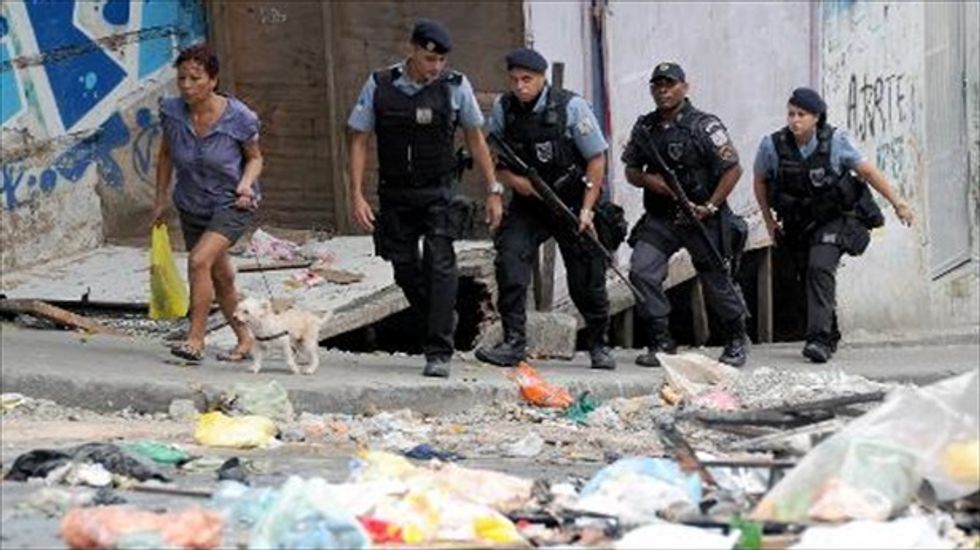 A group of militarized police patrol the Cantagalo favela, next to Copacabana, on April 23, 2014, in Rio de Janeiro [AFP]

Just 50 days before Brazil hosts the World Cup, authorities beefed up security in Rio de Janeiro after a violent clash between residents and police in a slum near the tourist haven of Copacabana beach.

Dozens of military police, including members of a feared special forces battalion, moved into the Pavao-Pavaozinho slum, which is also near the well-heeled Ipanema district, an AFP journalist reported.

The security operation comes after protests late Tuesday by residents over the death of a dancer who residents say was the victim of police brutality. A 27-year-old man was fatally shot in the head during the subsequent protests.

The deadly unrest was another blow to Rio's public image as Brazil prepares to host the month-long World Cup, which kicks off on June 12, and the summer Olympic Games in 2016.

Relative calm returned to the area on Wednesday, a public holiday in Rio, as firefighters and cleaners swept up broken glass and rubble from tire barricades that residents had set ablaze the night before.

Rio will host seven World Cup matches, including the final, but violence has recently flared in several of the city's slums, known as favelas, as the government struggles to crack down on organized crime.

Since 2008, city authorities have established dozens of Police Pacification Units (UPPs) in the favelas, including Pavao-Pavaozinho.

Many of them nevertheless remain under the sway of crime lords and violent drug gangs -- and those gangs are fighting back, attacking police as they defend their turf.

"We are a long way from reaching the ideal stage where the community feels protected by the police," said Ignacio Cano, researcher on urban violence at Rio University.

"We have to investigate these deaths but there needs to be better evaluation of the (pacification) project, above all the relationship between residents and police, which today depends on each commander of every UPP," Cano told AFP.

It began "with violent demonstrations by residents, certainly encouraged by the socially excluded, and ended in violent scenes, ransacking, and the burning of cars and other objects," Caldas said.

But police efforts have been hampered by allegations of a heavy-handed approach.

Those allegations hardened after Rio head of public security Jose Mariano Beltrame contradicted the initial police view of a fall being the cause of death.

"The report says the body was perforated by a bullet and the shot was fatal," Beltrame told a news conference, adding 10 policemen believed involved would be investigated.

Friends of the victim, identified as Douglas Rafael da Silva Pereira, who danced in shows for broadcaster Globo, said police had mistaken him for a drug dealer.

His body was found in a school early Tuesday, prompting an angry reaction from young people in the favela. They clashed with police, who responded with pepper spray and tear gas.

"There was a lot of blood, as if he had been dragged along the wall," she told Globo television.

An autopsy report published Wednesday by Globo's web news portal G1 showed the cause of death as "internal hemorrhaging caused by a perforating injury to the thorax."

Rio governor Luiz Fernando Pezao said via Twitter he would take "appropriate measures" once he had received conclusions into the dancer's death.

Residents said police fired on them during the protest.

"The police were firing real bullets and residents were protecting themselves as they could while throwing stones and bottles," one man, who gave his name as Fabio, told AFP.

He and several others indicated a 12-year-old boy was also killed by police during the protest, but authorities were unable to confirm the claim.

One resident complained police "treat us like dirt, insult us, hit us."