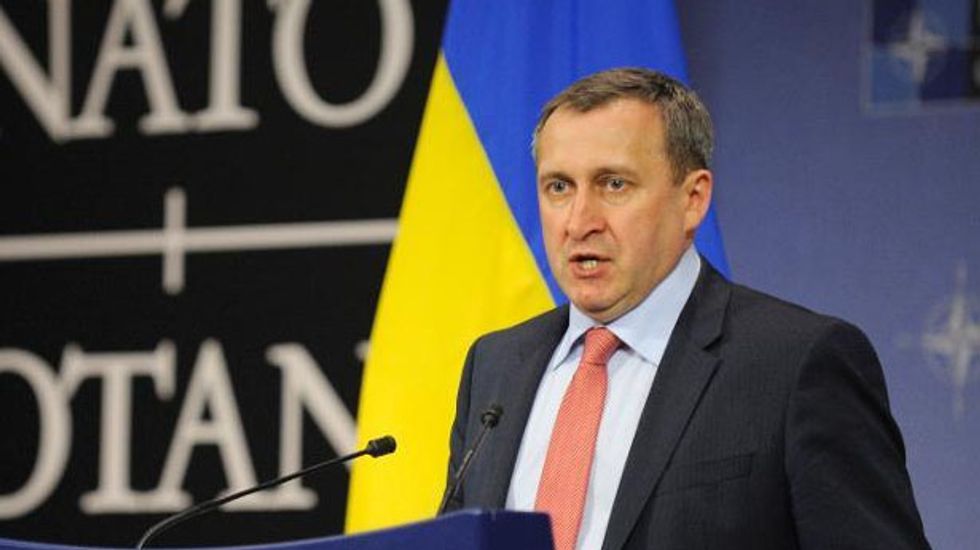 NATO said it has suspended all cooperation with Russia over the Crimea crisis and questioned Moscow's claim to have withdrawn troops from near the Ukrainian border, saying it could not confirm any pullback.

Just hours later the US Congress easily passed an aid package for Ukraine that includes sanctions against Russia for annexing Crimea, in the lawmakers' first binding response.

The West's latest moves came as Moscow heaped even more pressure on Ukraine's teetering economy with a painful gas-price hike, undermining what had been tentative signs of a calming in the worst East-West standoff since the Cold War.

Ukraine's parliament met one of Moscow's key demands by voting unanimously to disarm all self-defence groups that sprang up around the country during its political crisis, which first erupted in late November over the former government's decision to ditch a landmark EU association agreement.

Kiev also said on Tuesday that joining NATO was not a priority in a move that was also sure to satisfy Russia.

But tensions remained high more than two weeks after Moscow's takeover of Crimea, and NATO Secretary General Anders Fogh Rasmussen said the alliance was "suspending all practical cooperation with Russia, military and civilian".

He added however that "diplomatic lines of communication" remained open.

Rasmussen said he could not confirm Russia had pulled troops away from near the Ukrainian border.

"This is not what we have seen," he said as NATO foreign ministers gathered for two days of talks. US Secretary of State John Kerry flew in to Brussels amid shuttle diplomacy stops in the Middle East.

Ukraine and the United States have accused Russia of massing thousands of troops near the border and have expressed concern that Moscow plans to seize southeastern parts of Ukraine that are home to many ethnic Russians.

Kerry said the Russian announcement that it had withdrawn a battalion from the flashpoint border area was a welcome one, "but small compared to numbers that are deployed".

German Chancellor Angela Merkel, whom Russian President Vladimir Putin had personally told of the troop pullback, said she had "no reason" to doubt his word.

In Washington, the House of Representatives voted 378 to 34 to approve the aid bill, which the Senate passed last week, including $1 billion in loan guarantees to Ukraine.

The legislation, which now goes to President Barack Obama for his signature, also penalises individuals linked to Russia's annexation of Crimea and gives Obama flexibility in imposing wider sanctions.

With the conciliatory moves from Moscow, NATO stepped back from a floated idea to reinforce the alliance's military presence in countries bordering Russia, preferring for now to suspend cooperation and give more time to talks.

"I think everybody realises that the best way forward is a political and diplomatic dialogue," Rasmussen said, though he added NATO was "very determined to provide effective defence and protection of our allies".

One counter-measure apparently off the table for now is the idea to set up permanent military bases in NATO countries bordering Russia.

The move would be highly controversial for Moscow, reversing an informal agreement made when NATO expanded east to include former Warsaw Pact countries that were eager to break away from years of Soviet domination.

However, the US military may send a warship to the Black Sea and take other steps to reassure anxious allies in Eastern Europe, a US defence official said Tuesday.

Commanders are also looking at expanding a scheduled exercise this summer.

Eastern NATO members such as the Baltic states and Poland want a tougher stance against Russia and would welcome a deeper NATO presence within their borders.

In a joint statement, the NATO foreign ministers confirmed that military and civilian cooperation between NATO and Russia was suspended, but said projects in Afghanistan would remain and diplomatic channels were still open.

Ukraine is not a NATO member but it did form a "distinctive partnership" with the alliance in 1997 and has been staging joint exercises with member states ever since.

The Ukrainian parliament on Tuesday approved joint military exercises with the alliance between July and October that would involve US troops.

Meeting a key demand posed by Russia, the parliament also voted to disarm all self-defence groups that had sprung up during its political crisis.

Ukrainian politicians are jockeying for position ahead of May 25 presidential elections after the fall of pro-Moscow president Viktor Yanukovych.

With Moscow able to use gas supplies as a lever, Gazprom chief executive Alexei Miller said Ukraine will now pay $385.5 per 1,000 cubic metres of gas from the previous cut rate of $268.5.

The price hike -- although widely expected -- is a new blow to the Ukrainian economy, which needs an international rescue to stave off the risk of default.