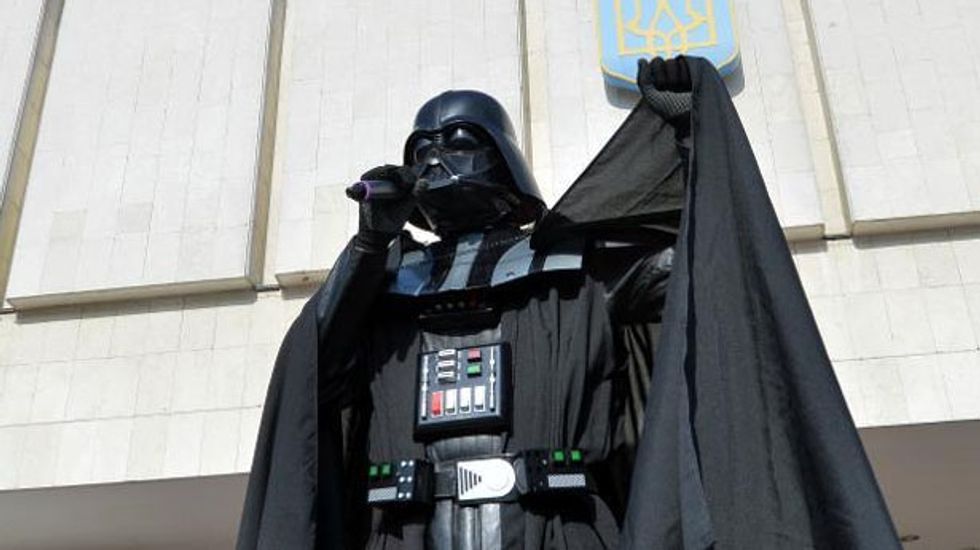 A man wearing the outfit of Darth Vader in Ukraine (AFP)

Darth Vader's run for president of Ukraine ended ingloriously Thursday when election officials said the man posing as the iconic movie villain might actually be an electrician named Viktor Shevchenko.

A man dressed up as the dark force in the Star War movies had showed up at the Kiev presidential election registration office Saturday and showed a passport with the name Darth Vader printed in Ukrainian.

It took 15 election officials nearly a week to figure out that the man in the black plastic costume was actually a Kiev native who was born in 1956 and now worked as an electrician at the National University of Food Technologies.

While his passport carried the name Darth Vader, tax documents and just about every other place the election officials looked identified him as Viktor Shevchenko.

"This might look like an innocent joke. But this is no laughing matter," Central Election Commission member Igor Zhydenko fumed.

"Someone was trying to turn the presidential election of Ukraine into a farce."

But the Sith Lord did not lose spirit and quickly announced his ambition to succeed President Vladimir Putin in Russia when that election rolls around in 2018.

Ukraine will hold early polls on May 25 to elect a successor to the former president, who fled to Russia after months of violent protests against his rule.

The man posing as Darth Vader -- who insists he and Viktor Shevchenko are not even remotely related -- was disappointed but unbowed.

He told reporters that he now intended to run for president of Russia because "it is already overrun by little green people and a commander in chief like me would fit right in."