Stephen Colbert salvages the 'wreckage' of his show after #CancelColbert kerfuffle 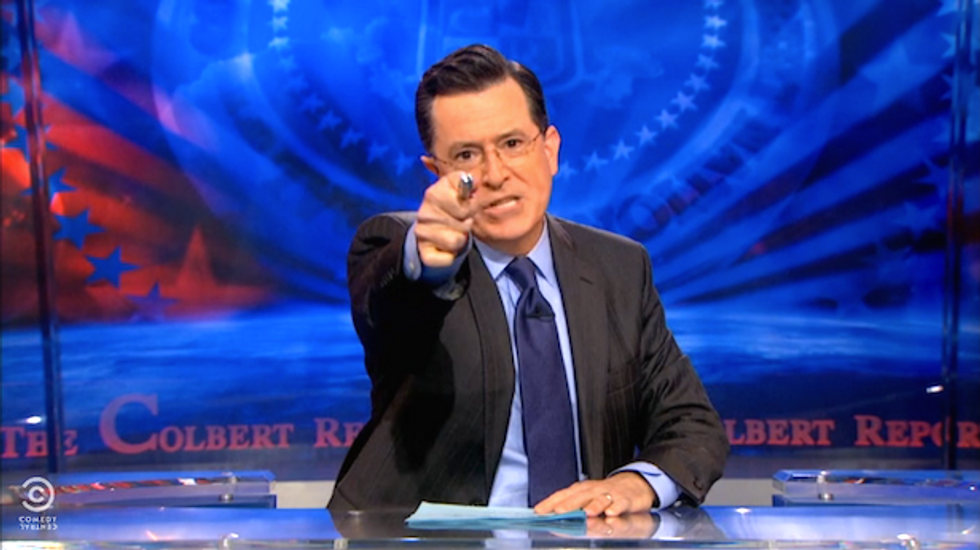 Stephen Colbert addressed online calls for his show’s cancellation Monday night in a lengthy segment that took shots at some critics and news media coverage of social media outbursts.

Colbert recapped the firestorm when an online activist launched the Twitter hashtag, #CancelColbert, last week over a social media post considered to be offensive toward Asian-Americans posted on the “Colbert Report” account maintained by Comedy Central.

“After that, when the twit hit the fan, the brain trust over at my network took the tweet down, because that’s how the Internet works,” Colbert said. “You can take stuff down, and no one will ever know it happened. Just ask Mayor Weiner.”

For a moment, it seemed as if Colbert might retreat into the standard dodge of accountability for offensive remarks (“I was taken out of context,” or “It was just a joke”).

“I’m not trying to throw anyone under the bus here, mostly because I don’t go that close to public transportation,” he said. “But when I saw the tweet with no context, I understood how people were offended, the same way I, as an Irish-American, was offended after reading only one line of Jonathan Swift’s ‘A Modest Proposal.’ I mean, eat Irish babies? Hashtag cancel Swift! Trend it!”

But he dropped his TV persona for a moment to defend Suey Park, who spurred the online campaign calling for his cancellation.

“(She) has been viciously attacked on Twitter, and if anyone is doing that for me, I want you to stop right now,” he said. “She’s just speaking her mind, and that’s what Twitter is for, as well as ruining the end of every show I haven’t seen yet.”

Then it seemed as if Colbert might try to “whitesplain” to his critics why they should not be offended by his comments.

“I just want to say that I am not a racist,” he said. “I don’t even see race, not even my own. People tell me I’m white, and I believe them, because I just devoted six minutes to explaining that I’m not a racist – and that is about the whitest thing you can do.”

The comedian bashed TV and online media reports about the controversy.

“CNN even took a break from their Malaysian airline coverage to report spotting what they thought was the wreckage of my show off the coast of Australia,” he said.

Then he took aim at one particular critic.

“Most hurtful, my fellow conservatives abandoned me in my time of need,” Colbert said. “Like Michelle Malkin, who co-signed onto #CancelColbert and called me a coward. Now this cuts deep, especially since I learned everything I know about sensitivity to the Asian-American experience from reading Michelle’s 2004 book, ‘In Defense of Internment.’ It turns out, they had it coming. One less thing for me to feel guilty about.”

He made a sly jab at Fox News host Bill O’Reilly, who recently compared himself to Jesus and other religious figures during a newspaper interview, as he noted that an entire weekend had elapsed before he could respond to his critics.

“So in a sense, I was canceled for three days – just like Jesus,” said Colbert, who later canceled the Colbert Report Twitter account with the help of company founder Biz Stone, a guest on the show.