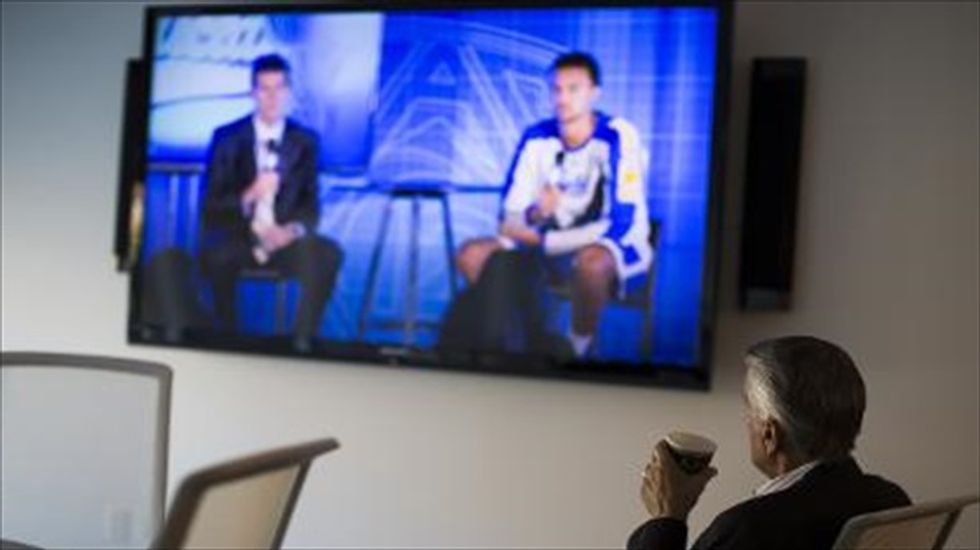 A startup that threatens to shake up the television industry with mini antennas for Internet viewing and recording was the object of heated debate Tuesday at the US Supreme Court.

A powerful coalition of the broadcast and cable TV industries asked the panel to rule against the startup Aereo, which allows customers to rent a tiny Internet-linked antenna to watch or record over-the-air broadcasts, raising difficult copyright questions.

A similarly strong alliance that includes several technology firms and consumer groups is pressing for a different outcome, saying a ruling for Aereo would send a signal in favor of technological innovation.

At stake are billions of dollars in fees paid by cable and satellite firms, which Aereo circumvents, in what could be the most significant copyright case in decades.

Justices appeared ambivalent at times, questioning whether Aereo was violating copyright law and mulling a possible impact on the burgeoning cloud computing sector, which stores all kinds of materials online.

Justice Stephen Breyer queried what might happen if Aereo were found to be in violation.

"Are we somehow affecting other things such as the cloud?" he asked attorney Paul Clement, arguing on behalf of the plaintiffs including ABC television, the National Association of Broadcasters, Time Warner and others. "I don't see how you get out of it."

Justice Samuel Alito offered a similar view, saying, "I want to know what impact this will have on other technology."

Aereo, which is backed by media mogul Barry Diller, launched in early 2012 in the New York area and was immediately sued by the major broadcast networks -- ABC, NBC, CBS and Fox -- for copyright infringement.

The company, which is expanding to other cities, claims its actions are legal because it is not rebroadcasting, but giving subscribers a personal antenna in its New York warehouse that enables them to watch live TV or record it for later viewing.

A US appeals court panel agreed with Aereo, ruling it was not retransmitting "public performances," which would be banned under copyright law, but merely allowing customers to rent antennas to receive and record free broadcasts.

Clement urged the justices to put aside the issue of cloud computing and simply consider the copyright issue -- claiming Aereo gets around royalty fees that similar services such as cable must pay.

"There is a fundamental difference between a company that provides an ongoing service to the public and an online locker," the attorney said.

But Chief Justice John Roberts pondered the Aereo argument that it was merely renting equipment that a consumer could use legally.

"You can go to Radio Shack and buy an antenna and a DVR (digital video recorder), or you could rent those facilities somewhere else from Aereo."

This point was emphasized by attorney David Frederick, arguing for Aereo.

"We are not a cable service," he said. "Aereo is an equipment provider."

The lawyer said Aereo allows consumers "to replicate in the cloud what they could do on their own."

While the justices expressed concern about impacting the cloud industry, some also voiced skepticism about whether Aereo was designed as a ruse to evade retransmission fees.

Roberts said, "Your technological model is based solely on circumventing legal prohibitions that you don't want to comply with."

Much of the debate centered on whether Aereo was in fact transmitting a signal, which would be a "public performance" under copyright law and not a private way of shifting the viewing of a program -- the subject of a landmark 1984 ruling on Sony and its Betamax recorders.

The US government, backing the broadcasters, argued that Aereo is in fact a transmission service and violates US copyright law.

Deputy Solicitor General Malcolm Stewart told the justices Aereo is similar to cable television that uses "one big antenna" and "ought to be paying royalties."

Breyer said that even if one concedes the notion of public performance, he was at a loss in how to craft an opinion that fails to impact cloud computing.

The National Football League and Major League Baseball have backed the broadcasters, claiming it would upset longstanding copyright traditions.

And some broadcast executives have threatened to end over-the-air transmissions, which would force consumers to watch those channels on cable or satellite.

"The case has ramifications reaching far beyond the future of Aereo and change-resistant broadcasters," said CCIA President Ed Black.

"It's about the future of an essential aspect of Internet commerce: cloud computing."

The justices are expected to issue a ruling by the end of June.

With the carnage in Uvalde, Texas, and Buffalo, New York in May 2022, calls have begun again for Congress to enact gun control. Since the 2012 massacre of 20 children and four staff members at Sandy Hook Elementary School in Newtown, Connecticut, legislation introduced in response to mass killings has consistently failed to pass the Senate. We asked political scientists Monika McDermott and David Jones to help readers understand why further restrictions never pass, despite a majority of Americans supporting tighter gun control laws.

Mass killings are becoming more frequent. Yet there has been no significant gun legislation passed in response to these and other mass shootings. Why?