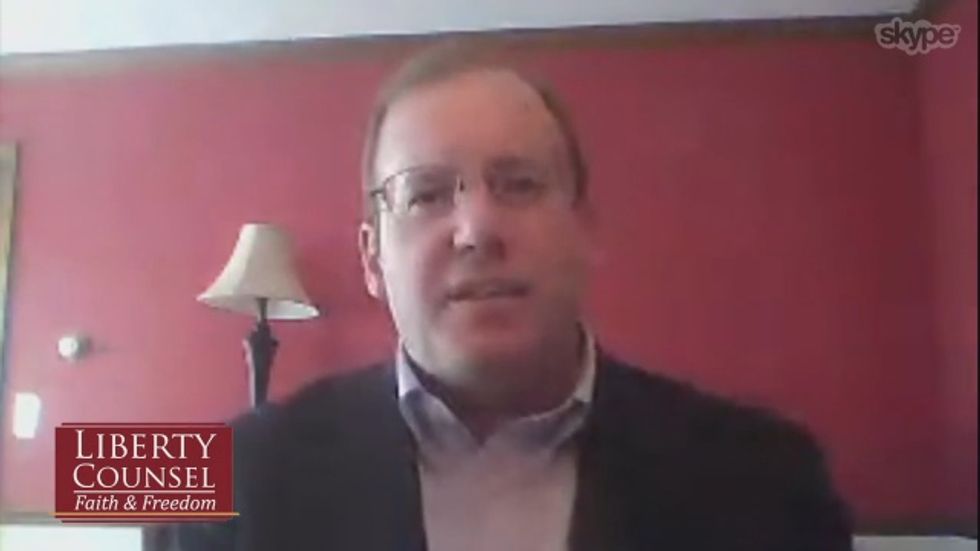 An attorney representing anti-gay crusader Peter LaBarbera has accused a writer for Salon of defaming his client, by reporting that he used the term 'effing' in a public forum, and has demanded a retraction and an apology.

The demand is in response to an article posted on Salon.com  entitled “You’re leaving? Are you effing kidding?” An anti-gay bigot gets humiliated," written by Kate Geiselman.

LaBarbera is the president of Americans For Truth about Homosexuality dedicated to "exposing the homosexual-bisexual-transgender activist agendas."

The email, sent to Geiselman and Salon editor Cindy Jeffers, accuses Geiselman of "false and defamatory statements" that are injurious to LaBarbera's reputation.

In the email, Attorney Charles LiMandri of the Freedom of Conscience Defense Fund, writes:

By your false and defamatory statements you have maliciously sought to injure Mr. LaBarbera in his reputation and to expose him to public hatred, contempt, ridicule, shame or disgrace. You have also sought to injure him in his trade or profession. We hereby demand that you issue a public retraction of, and a public apology for, your false and defamatory statements made against Mr. LaBarbera.

In her article, Geiselman recounts LaBarbera's disastrous appearance as a speaker at Sinclair Community College in Dayton, Ohio, on April 9, 2013 to discuss 'the gay agenda.' According to Geiselman, LaBarbera took the stage before approximately 100 attendees, only to have most of them walk out en masse as he began to speak. A frustrated and angry LaBarbera reportedly said, “You’re leaving? Are you effing kidding?”

According to LiMandri, an audio recording of the event proves that his client , "...did not utter the unprofessional and defamatory words that you attribute to him. This has been confirmed by multiple witnesses who were in immediate proximity to Mr. LaBarbera during his entire presentation."

Additionally, LiMandri said that Geiselman, "... falsely accused Mr. LaBarbera of being, “a person who makes his living telling lies” in the internet posting attached above. You did so even though you did not even have the decency to listen to his remarks before publicly excoriating him."

Attorney LiMandri has given Geiselman and Salon ten days to issue a retraction and apology to LaBarbera or face a lawsuit asking for compensatory and punitive damages.

There has been no response to the email posted at Salon.com as of this time.

Joining a chorus of progressive critics disappointed by the direct payment provision of President-elect Joe Biden's new coronavirus pandemic relief plan, Congresswoman Rashida Tlaib on Friday evening reiterated the need for two bills she has introduced that would aid Americans affected by the ongoing public health and economic crises.

Biden's $1.9 trillion proposal calls for $1,400 checks, the difference between the $600 that lawmakers agreed to in a recent relief package and the $2,000 sought by some Democrats for months. Though President Donald Trump backed boosting the checks on his way out the door, the increase failed to garner enough congressional support.